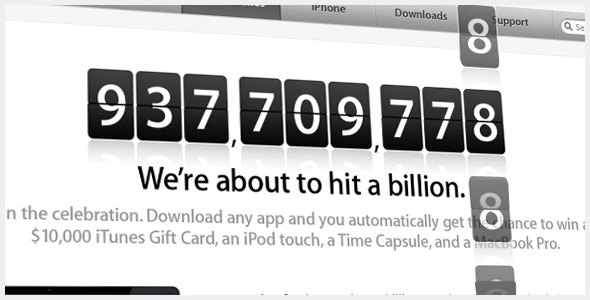 Their countdown (countup?) page has a nify flipping counter like the old alarm clocks and at first, I thought it was done with Flash but upon closer inspection, discovered it was done with a single image, a smattering of JavaScript, and a clever usage of CSS sprites. They also have a smaller version running on their home page.

The image (seen running down the side of this post) is an image 6,000+ pixels tall with the various states of each number zero through nine flipping from one to the next, but only one state is seen at a time. The JavaScript then changes the background position property at short regular intervals to give the illusion of flipping numbers—similar to the effect of a zoetrope. The effect is repeated at longer intervals for each of the digits in the countdown to one billion.

The cleverness is in it's simplicity. There's no need for a fancy Flash animation—just the basics mixed with a little of Apple's usual flare.