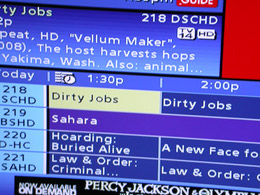 Digital TV Guide with truncated and stretched text, plus banner ads on every screen.

The digital TV Guide that came with the upgrade would have been fine except:

Now that all my favorites were in HD, which is more fun to watch than the alternative, I needed to learn a new list of 3-digit numbers and remember others as I discovered all the new options available to me. I decided to make this an exercise and spent some time over the long weekend making a convenient cheat sheet that listed all the channels. Fitting the huge list of 406 channels on one sheet isn't easy.

(Interestingly enough, Comcast used to offer cheat sheets a few years ago but stopped in favor of the digital version.)

I also wanted to fit both lists on the front and back of a regular 8.5×11” piece of paper.

First attempt: too much chartjunk

I started by copying the Comcast channel lineup into InDesign and dropped the font size down to six points. After adding some lines, columns, and condensing some ranges, I thought it was perfect—until I printed it. 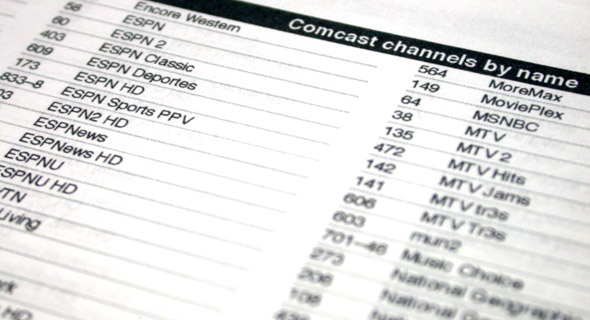 Not a bad first attempt but too much chartjunk. The lines looked good on the screen but far too thick when printed on an inkjet, the reversed-out type in the title was impossible to scan quickly, and everything blended together. I tried making the lines thinner, lighter, dotted, etc. but little helped.

Then I wised up and took the lines out entirely and after right-aligning the numbers, saw that the white space created by the text was enough division between the channels. 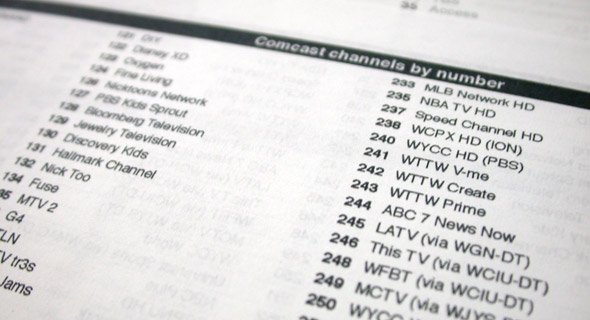 It was close but not there yet. The numbers and names blended together too much and I still didn't like that black title bar at the top. I tried making the numbers bold but that made things worse.

Finally, I removed even more chartjunk by lightening the secondary text. For example, when browsing by number, the number is primary and name secondary and vice versa for browsing by name. Making the secondary text 40% lighter made the primary text stand out a lot more without impeding legibility. Plus, I tightened up the spacing even more creating more room to bump up the font size to seven. I also finally fixed the title bar. 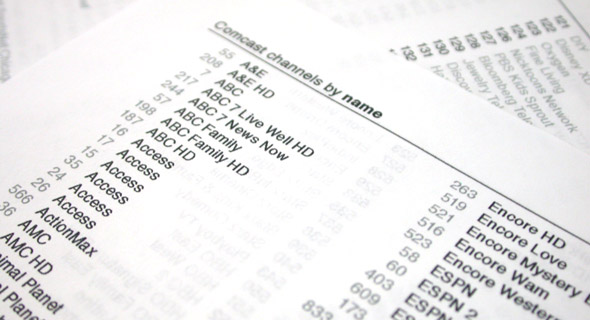 I'm very pleased with the final result. There are probably other improvements I could have made like highlighting my favorite channels, color coding different genres, or removing channels I don't get, but I made this for me and a simple list is all I needed. Creating this was also a fun exercise in the idea of removing all you can until only the essential information remains.

I've included a PDF of the final result for those who want to get a better view than my cheap photos above.