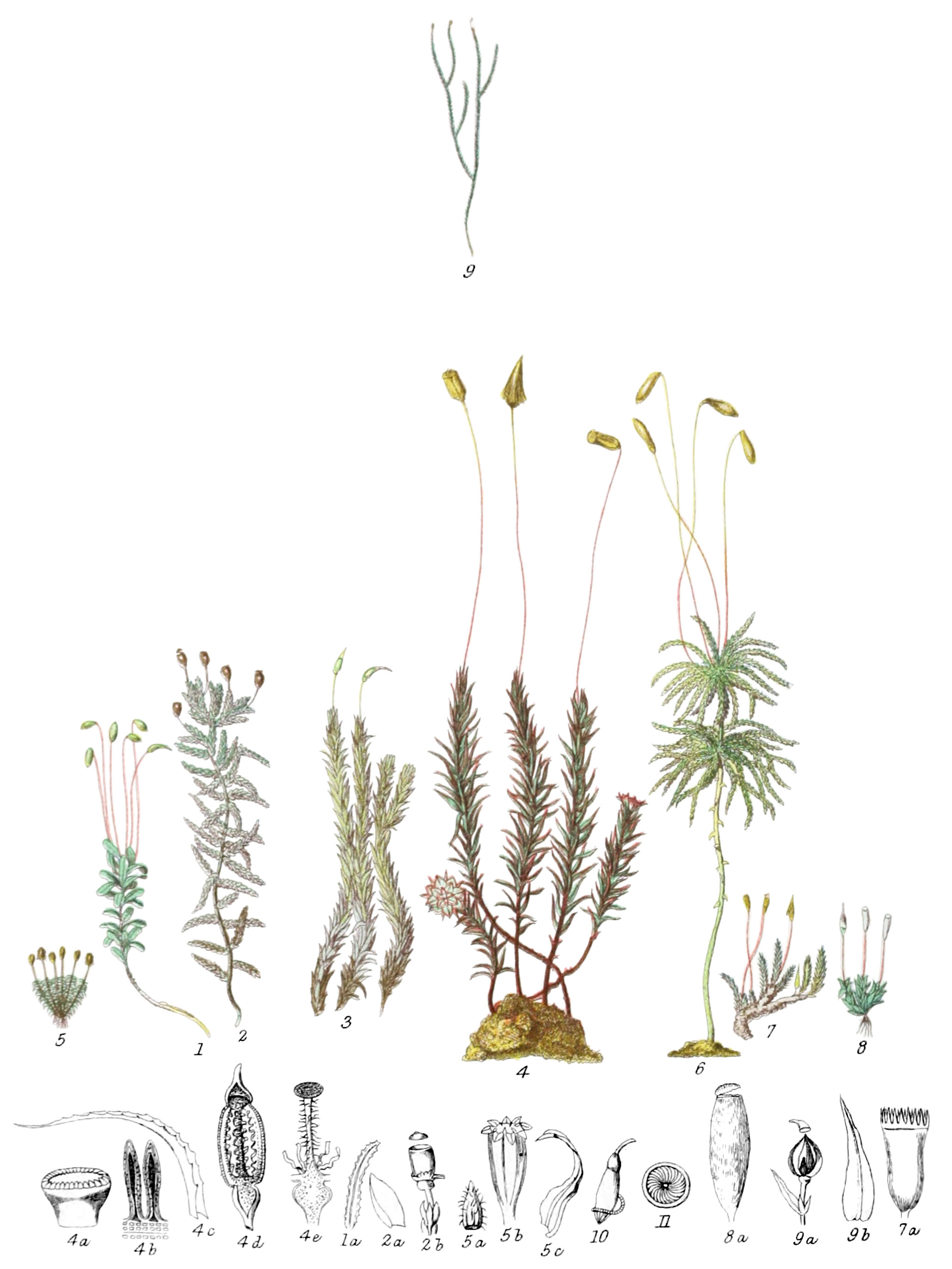 This Order contains small herbaceous plants, of cellular tissue only, terrestrial or aquatic, having fibrous roots, creeping or rect, covered with minute imbricated leaves, entire or serrated at the edges. The reproductive organs are of two kins, cylindrical bodies at the base of leaves containing small round particles and coiled up threads which move in water, and capsules or spore-cases on a stalk covered by a membranous calyptra, closed by an operculum or lid, beneath which are one or two rows of stiff cellular teeth called the peristome. A series of elastic cells is called the ring (10). In the centre of the spore-case is the column surrounded by spores. The spores germinate on the surface of the ground or in the trunk of trees, they produce first filaments thickly interlaced, like those of Conferva, from the joints of which leaf-buds spring.

These plants have close affinity with the Liverwort tribe by Jungermannia, but are distinguished by having an operculum to the spore case.

Slightly astringent properties exist in Polytrichum and others.

Mosses are amongst the lowliest classes of vegetation, and afford very little direct use to man or animals; yet they perform an important part of the great plan of creation, and though of minute size assist in countless numbers in the first work of covering barren rocks or volcanic soil with verdure, thus preparing the land for more valuable herbage. A great similarity prevails throughout the tribe, but endless variety is found in different species, both in the arrangement of the parts and in the manner of growth. Some form dense tufts not rising to the height of an inch, others grow more separately and imitate the aspect of more highly developed plants. The spore-case or urn is not always symmetrical on its stalk, in some species it is larger on one side than the other; the length of the stalk varies extremely, in some instances scarcely elevating the spore-case above he leaves, in others attaining several inches in height; it proceeds either from the ends of the branch, or from the side.

The plants of this Tribe are dispersed in every part of the world wherever any vegetation can exist: most abundant in Temperate climates. They cause the first verdure on extinct volcanoes, or barren rocks, both in Southern and Northern latitudes, extending to the Isles of New South Shetland, and forming more than a quarter of the scanty Flora of Melville Isle.

*9b was not named in the original description.