Intersections of major roads have been given nicknames like “mixing bowl,” “spaghetti junction,” and “knot”—invoking images of tangled messes (and rightly so), but there's beauty in the chaos. Applying colors to roads and using connecting roads to blend those colors adds structure and breathes new life in to areas that are often avoided for their complexity. The results resemble everything from dancers to otherworldly creatures.

How they were made »

Since no official list of "spaghetti junctions" exists, many hours were spent scouring maps for the most complicated interchanges. The rough list of spaghetti junctions on Wikipedia was a helpful start but isn't a complete list.

Once an interchange was found, map data including road lines were exported as KML files from Overpass Turbo, a tool that exports OpenStreetMap data carefully collected by dedicated contributors. The KML files were then converted to SVGs using GPS Visualizer which supports converting almost any geographic file to another or images. These three tools are invaluable for someone looking to avoid digging deep into mapping code and only wants the graphics to manipulate.

The SVGs were imported into Illustrator and lines interchanges were manually isolated by removing lines for surrounding roads. Boundaries for an interchange were defined by where on/off ramps merge with major roads or where roads or an appropriate distance away from the main area of an interchange when the roads didn't merge. Lines for each road were colored individually using Illustrator's gradient along stroke feature so each road starts as one color and ends as another regardless of its twists and turns. Roads were then simplified to transform the hard edges from the original export into smooth curves. Overlapping lines corresponding to overpasses and underpasses were preserved to stay true to the original structure of interchanges.

Each diagram contains every possible path from one road to another. Many paths overlap by using the same stretches of road which is why the colors of some roads stop abruptly. The animation shows all paths of the interchange in Porto, Portugal as shown above.

Every path in the diagram of the interchange between A41/IC24, VRI, Rua do Barreiro 135, and Rua das Minhoteiras 70 in Porto, Portugal as shown above

Colors are assigned by ranking desigations. Diagrams are arranged by size.
(Diagrams available for purchase as high-quality posters. Click each for details.) 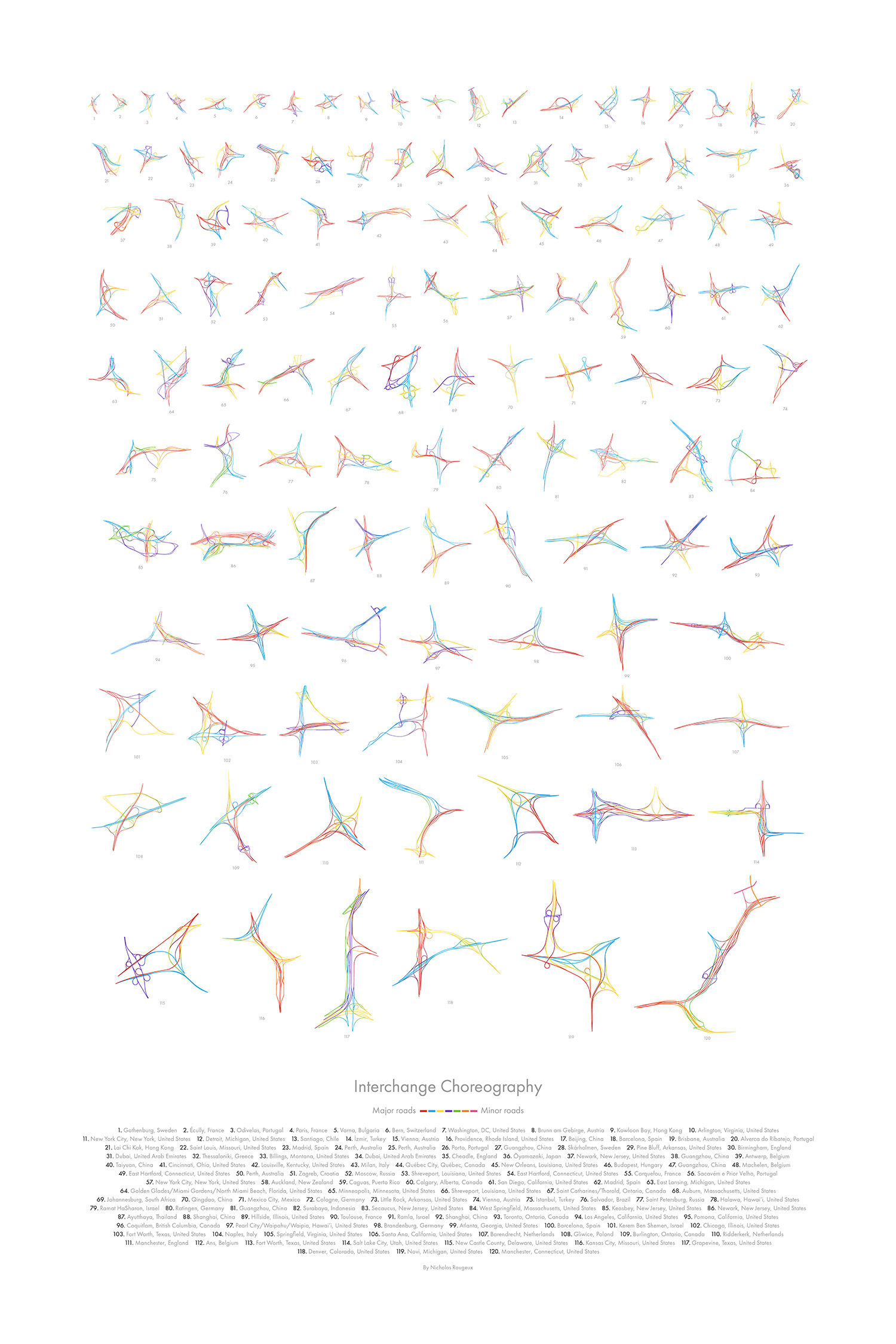 Images are based on data © OpenStreetMap contributors, ODbL (Terms), CC-BY-SA.