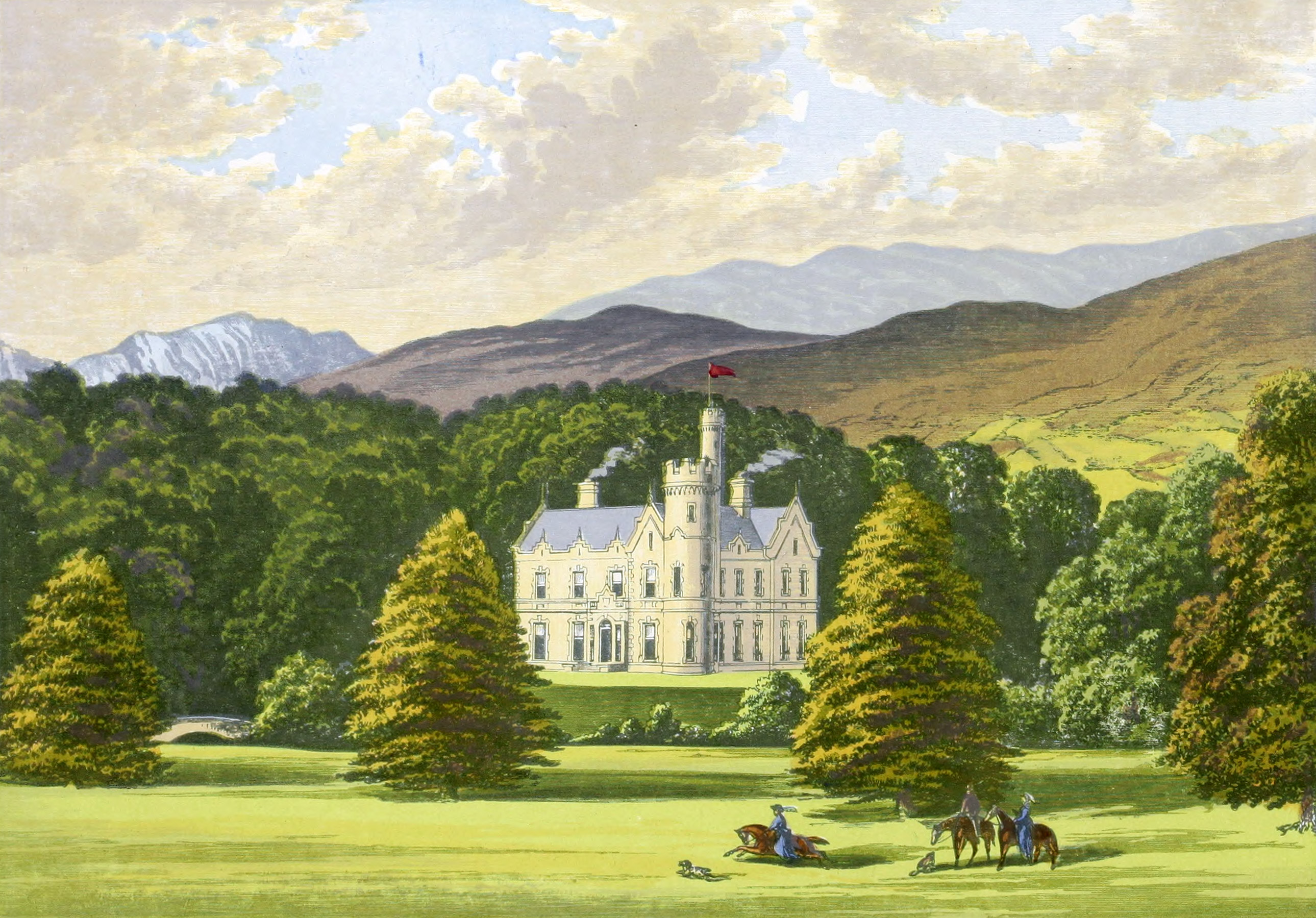 Though scarce a vestige of the castle, on the site of which the present residence at Ardtully has been built, now remains, the ancient title might still continue to attach to it, as in the similar case of Castle Howard, already mentioned in the present work, where the name alone remains as a record of the past, without a single trace of the original building, and the same in several other like instances, but the present member of the family, into whose possession it has come, has discontinued it on raising the new edifice.

There are, however, as presently stated, a few mouldering relics of the former towers of Ardtully still in being, which may serve to summon up before the mind’s eye the wild times so long passed away, when it stood firm as a fastness among the mountains; and again those long intervening years, when, before the utter ruin that followed, the words of the poet might still have been applicable to them:—

“The roofless cot, decayed and rent, Will scarce delay the passer-by; The tower by war or tempest bent, While yet may frown the battlement, Demands and daunts the stranger’s eye Each ivied arch and pillar lone Pleads haughtily for glories gone.”

Ardtully, the country seat of Sir Richard John Theodore Orpen, is beautifully situated at the confluence of the rivers Roughty and Obeg, in the valley of Glenarough, about five miles east of the town of Kenmare, in the county of Kerry. It is built on the site of an ancient castle, belonging to the family of McFinnin McCartie, who forfeited in the rebellion of 1641. He would appear from his name and character to have been the prototype of the modern Fenians, so that one might have supposed that they are nothing new after all, and that thus history repeats itself: it is, however, stated that the word means “the Son of Florence,” but I fancy I have somewhere seen the other derivation, and can only say to my readers, “utruin horum mavis accipe.” There had been previously, on the same spot, an abbey called “Monaster ni Oriel,” of which mention is made in “Archdall’s Monasticon.” It has been suggested that the abbey may have been founded by some monks from Oriel in Ulster, the people of which were, as mentioned in the “Annals of Innisfalien,” called in Irish Oirgialla Olltach. Ardtully is called Ardentully in “Pacata Hibernia.”

The waters of the rivers Roughty and Obeg being there contracted between rocks on either side, the flood rises to a great height; from whence, it is said, is derived the name Ardtully, in Irish Ardtuilè, that is “High flood.’ The monastery has entirely disappeared, but some carved stones of the castle remain. It seems to have been a place of considerable strength.

The Orpen family settled in Kerry in the time of the second Charles, having lost their property in England in consequence of their adherence to that monarch’s father, King Charles the First.

The Orpens claim descent, through Sir John Open, from Monsieur Erpen de Seulli or Saulier, who came to England with the Conqueror. They also claim to be of the same family as that of Sir Thomas Erpingham, of Erpingham, or Orpingham, in the county of Norfolk, the hero of Agincourt. The family subsequently resided at a place called the “White House/’ about a mile from the town of Kenmare, built in a strong position on the river of that name. This house, now in ruins, is celebrated for the siege, which Mr. Richard Orpen of that day and the Protestants of his neighbourhood, sustained against the troops of James the Second, as mentioned in the last volume of Lord Macaulay’s “History of England.”

A branch of the above named Orpen family settled at Ardtully about one hundred and fifty years since, from whose descendants it passed into the hands of

Sir Richard John Theodore Orpen, who built the house represented by the plate, on the site of the old mansion where previously had stood Ardtully Castle.

The family of Orpen is connected with that of the editor of the present work, by the marriage of his father, the late Rear Admiral Henry Gage Morris, R.N., of York, and afterwards of Beverley, with Miss Rebecca Newenham Millerd Orpen, daughter of the Rev. Francis Orpen, B.A., vicar of Kilgarvan and rector of Dungourney, in the county of Cork.