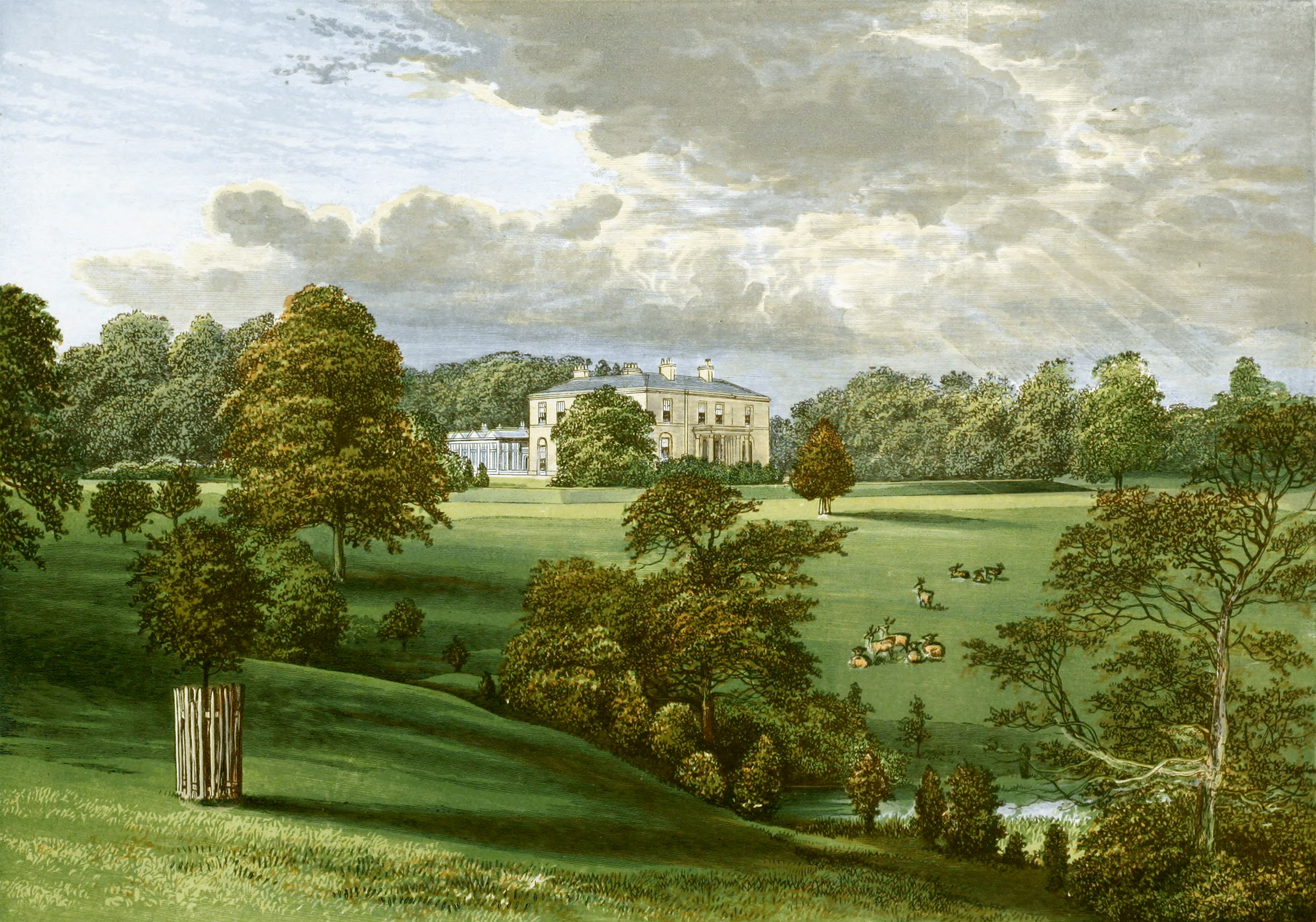 Ashcombe Park became the principal residence of the Sneyds of Bishton and Belmont, on the marriage of William Sueyd with Jane, daughter and heiress of Simon Debank, Esq.

The house is of Doric architecture. Though simple in outline, its proportions are exceedingly good, and it is most beautifully and substantially constructed of large blocks of smooth grey stone, and on the east front has a handsome portico.

The beauty of the home view, diversified with wood and water, is well contrasted with the rugged background formed by the moors of Cheshire, Derbyshire, and Staffordshire. To the north the sharp peak of Axe Edge, and the rocky outline of the Roaches, are striking objects in the landscape; to the southward are the Wever Hills, overlooking the valley of the Dove.

The principal feature of the interior of the house is a geometrical staircase of Derbyshire marble, surmounted by a cupola. The reception rooms are large and lofty, and are hung with valuable oil paintings, among which is an unusually full collection of family portraits by Lely, R. Phillips, Sir Joshua Reynolds, etc., commencing with Ralph Sneyd and his two sons, Ralph and Richard, who were officers in the Royalist army in the reign of Charles the First. Colonel Ralph Sneyd was killed by the last shot fired in the Countess of Derby’s defence of the Isle of Man, and his brother Richard subsequently attended Charles the Second in his flight from Worcester to Boscobel. From their brother William, to whom the estates descended, and who subsequently sat for the County of Stafford in the Restoration Parliament, there is an unbroken line of portraits to the present day.

This ancient family has held lands in Staffordshire for upwards of six hundred years. The descent of the same is as follows:—

Henry de Sneyde, of Sneyde and Tunstall, county of Stafford, who was living 3 Edward II. {1310), was seized of lands in the hamlet of Sneyde, which had descended from Richard de Snede, who held Snede under Henry de Aldithleye, and William de Snede, who had a grant from Richard de Hay, A.D. 1270. By his wife Margaret, daughter and heiress of Nicholas de Tunstall, he had a son,

Nicholas de Sneyde, alias Tunstall, who was also seized of lands in the manor of Bradwell, county of Stafford, 7 Edward III. (1333). He was succeeded by his son,

Richard de Sneyde, alias Tunstall, who added the fleur-de-lis to his arms after the battle of Poictiers. He was the last to bear the name of de Tunstall. His son,

Richard Sneyde, of Bradwell and Tunstall, had a grant of the manor of Bradwell from Lord Audley, 2 Henry IV. (1400). He was succeeded by his son,

William Sneyde, of Bradwell, whose son,

Richard Sneyde, of Bradwell, by Agnes his wife, daughter of Sutton, of Sutton, county of Chester, left a son,

Nicholas Sneyde, of Bradwell. He married Margaret, daughter and co-heiress of Robert Downes, of Shrigley, in the county of Chester, and was succeeded by his son,

William Sneyde, of Bradwell and Chester, Sheriff of Chester in 1473, who, by his wife Johanna, daughter and heiress of Roger Ledsham, of Chester, Gentleman, had a son,

Richard Sneyde, of Bradwell, Recorder of Chester, M.P. for Chester in 1553. He married Anne Fowlehurst, of Crewe, and left a son.

Sir William Sneyde, Knight, of Bradwell, High Sheriff of Staffordshire, 3 Edward VI., and 5 and 6 Philip and Mary, who was engaged in the battle of Pinkie, and had a grant of Keele from the crown. By his wife Anne, daughter and heiress of Thomas Barrowe, Esq., of Flookersbrooke, county of Chester, he had a son,

Ralph Sneyde, of Keele and Bradwell, High Sheriff of Staffordshire, 18 and 37 Elizabeth, married Mary, daughter of Thomas Chetwynd, Esq., of Ingestre, succeeded by his son,

Ralph Sneyde, of Keele and Bradwell, born 1564, High Sheriff 19 Charles I., M.P. for Staffordshire in 1640, married Felicia, daughter of Nicholas Archbold, Esq., and had a son,

Ralph Sneyde, of Keele and Bradwell, M.P. for Staffordshire, and Colonel in the Royalist Army, who was succeeded by his brother,

William Sneyde, of Keele, born 1612, M.P. for Staffordshire, and High Sheriff 16 Charles II. By his wife Elizabeth, daughter and co-heiress of Robert Audley, Esq., of Gransdon, county of Huntingdon, he had issue

1. Ralph, (who inherited the Keele estates), and

2. William Sneyd, of the Birches and Onecote, who married Sarah, daughter and heiress of Edward Wettenhall, Esq., of Onecote, and was succeeded by his son,

Ralph Sneyde, of Bishton, who married Elizabeth, daughter and heiress of John Bowyer, Esq., of Bishton, and died November 3rd., 1729, leaving a son,

William Sneyd, of Bishton, who married Susanna, daughter and heiress of John Edmonds, Esq., of Hendon Hall, Middlesex, and was succeeded by his son,

John Sneyd, of Bishton and Belmont, born July 11th., 1734, High Sheriff of Staffordshire in 1770, who, by his wife Penelope, daughter of Thomas Kynnersley, Esq., of Loxley Park, in the county of Stafford, had a son,

William Sneyd, of Ashcombe Park, born September 5th., 1767, who, by his wife Jane, daughter and heiress of Simon Debank, Esq., left a son,

Read more at Staffordshire Past Track »