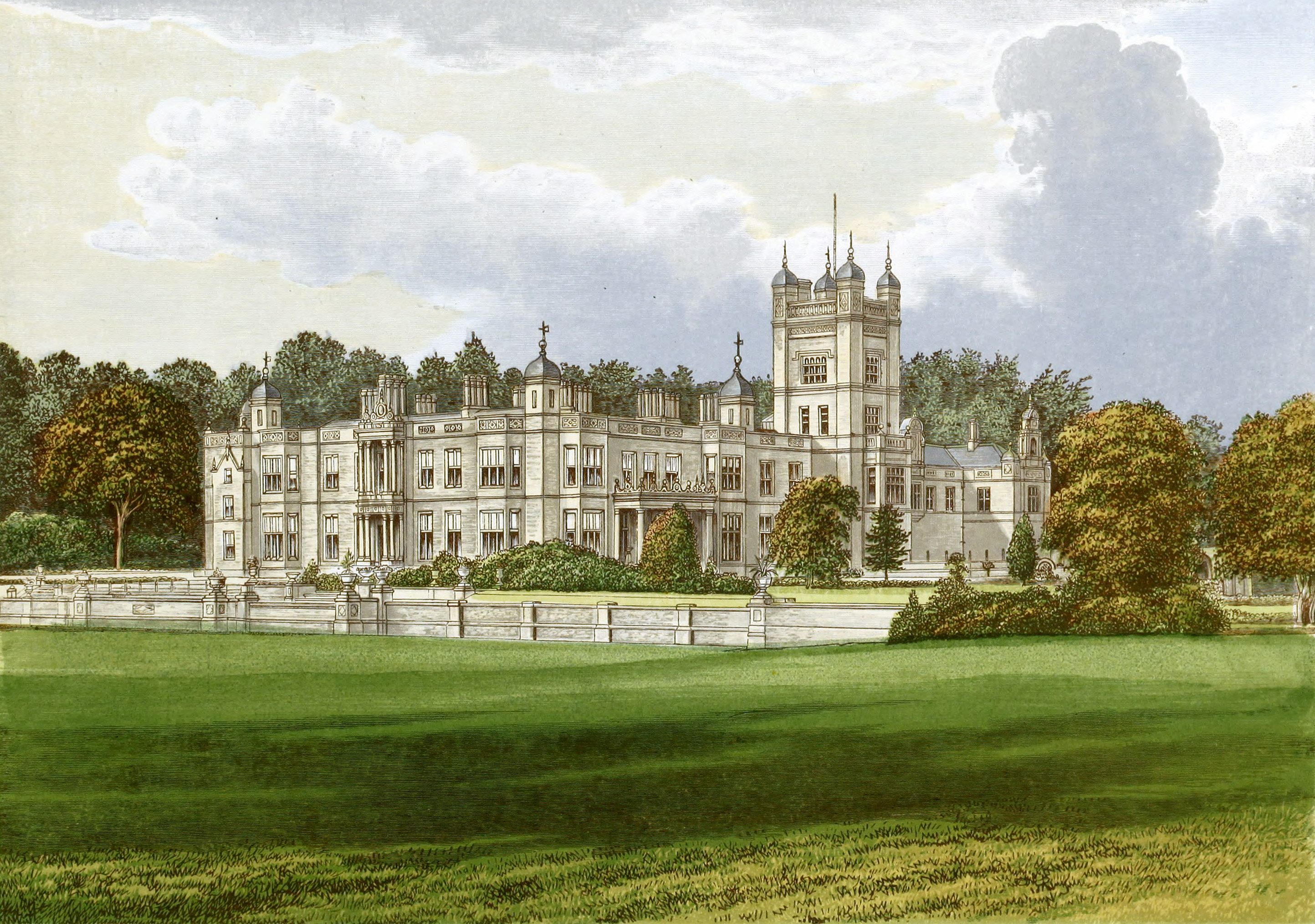 Near Kirkby Lonsdale, Westmoreland.—Earl of Bective.

Underley Hall is situate in immediate proximity to the market town of Kirkby Lonsdale, in Westmoreland. The existing mansion was erected by Alexander Nowell, Esq., in the year 1825, and was completed at a cost of about £30,000.

The Underley estates were purchased by Alderman Thompson in the year 1842, and his grandson, Thomas Taylour, Earl of Bective, M.P. for Westmoreland, became their possessor.

The house is of yellow freestone, and contains many very elegant apartments. In the year 1872 very extensive improvements and additions were commenced by the then owner. The principal additions include a tower one hundred feet high, and the whole of the mansion from the two windows south of the tower is entirely new. At the east front is a ball-room, in immediate communication with which a magnificent conservatory was constructed, the base of the front being of stone to the height of five feet, surmounted by a globular roof composed of wrought iron framework and glass, and crowned with a glass dome twelve feet in diameter. There is a corridor leading from the tower to this conservatory, seventy-five feet long by thirteen feet six inches wide. The conservatory itself is seventy feet by twenty.

The hall is surrounded with extensive parks and pleasure grounds, which command delightful prospects of the Vale of the Lune, composed of hill and dale, beautified by the river Lune pouring along its rapid stream over a rocky bed. At the extremity of the pleasure grounds is a fine bridge. The work of construction was commenced in 1872, and completed in 1875, at a cost of £10,000. Owing to the rapid rise and fall of the river, the strength of its current, and the gravelly nature of its bed, the erection presented some considerable engineering difficulties. The bridge is of Roman Gothic architecture, and contains two ribbed arches of seventy feet span, being the largest ribbed arches in the kingdom, forming a noble structure, and constructed solely for private use, as making a near route to Barbon Station, on the Ingleton Branch of the London and North-western Railway.

From nearly every part of the grounds the scenery is such as is rarely to be met with, embracing fine prospects of the Westmoreland and Yorkshire hills. Near to the hall, and on the opposite side of the river, is an eminence which gradually rises from the river’s bank for nearly a mile, covered with a mass of diversified woodland, over which rise in bold relief the smooth ridges of Casterton Fells; more to the left the view extends further up the valley, taking in Middleton Fells, and ultimately ending in the blue peaks of Howgill Fells in the extreme distance.

The gardens and rosaries, nestling as they do on the banks of the river, are laid out in the most tasteful designs, and form a beautiful picture viewed from any point.

Underley, embosomed in the Vale of the Lune, contains within itself much picturesque scenery, and many lovely and sequestered spots. The view of the river, now rushing over opposing rocks, and now stealing softly and silently along, is everywhere very charming. Here, amongst a host of smaller hills, Ingleborough is seen rearing his proud head far and wide, the prospect beyond being agreeably terminated by the long range of the Pennine Chain fading away in the distance.

The line of this family deduces from

Thomas Taylour, Esq., of Ringmore, in Sussex, who died in 1620, after whom came

Sir Thomas Taylour, third Baronet, born October 20th., 1724. He was elevated to the Irish Peerage, September 7th., 1760, as Baron Headfort, of Headfort, in the county of Meath; further raised as Viscount Headfort, April 12th., 1762, and advanced to an Earldom as Earl Bective, of Bective Castle, October 24th., 1766. His eldest son,

Sir Thomas Taylour, second Earl of Bective and a Lord of the Bedchamber, was created Marquis of Headfort. He was succeeded by his eldest son.

Sir Thomas Taylour, second Marquis of Headfort, K.P., P.C., Lord Lieutenant of the county of Cavan, created a Baron of the United Kingdom, as Baron Kenlis, of Kenlis, in the county of Meath. His son,

Sir Thomas Taylour, for some time M.P. for Westmoreland, born November 1st., 1822, married, July 20th., 1842, Ameha, only child of William Thompson, Esq., of Underley Hall, in that county, and had, with other children,