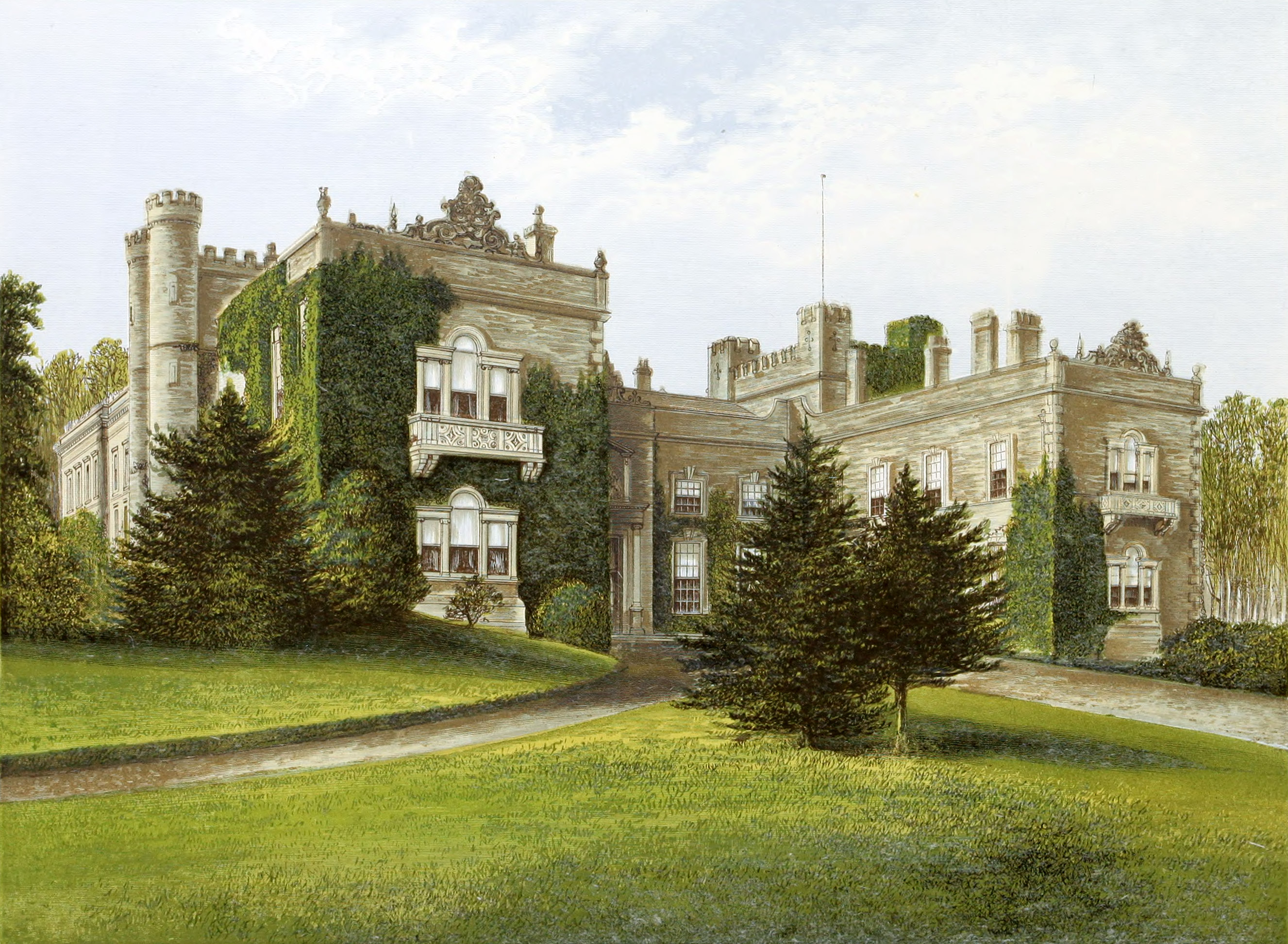 Near Richmond, Yorkshire.—Earl of Zetland.

Aske Hall, about two miles from Richmond, in Yorkshire, is beautifully situated on rising ground, with a large extent of wood behind it, and overlooking a beautiful and fertile vale, with the Cleveland and Hambledon hills in the far distance.

The house is built of stone and much covered with ivy. It consists of a centre and two long wings, with a court-yard behind. From one of the wings rises a handsome old Border Tower.

The estate was purchased by Sir Lawrence Dundas from the last Earl of Holderness in the year 1760.

Of the family of Dundas of Dundas, Lord Woodhouselee wrote that it is one “to which the historian and the genealogist have assigned an origin of high antiquity and splendour, but which has been still more remarkable for producing a series of men eminently distinguished for their public services in the highest offices of Scotland.”

James Dundas, of Dundas, by Christian, his wife, daughter of John, Lord Innermeath and Lorn, was father of

Alexander Dundas, of Fingask, who married Eupham, daughter of Sir Alexander Livingston, of Callendar, and died in 1451, in prison at Dumbarton Castle, where he had been confined by the hostility of the Earl of Douglas. His son,

Alexander Dundas, of Fingask, married Isabel, daughter of Laurence, Lord Oliphant. He fell on the fatal field of Flodden, in 1513, and was succeeded by his eldest son,

Alexander Dundas, of Fingask, who married Elizabeth, daughter of Sir David Bruce, of Clackmannan, and was slain at the battle of Pinkie. His eldest son,

Archibald Dundas, of Fingask, living in the time of James VI., and of much influence, was followed by his son,

William Dundas, of Fingask, who married, in 1582, Margaret, eldest daughter and coheiress of Sir David Carnegie, of Clouthie, but having no children, his brother succeeded him, namely,

Archibald Dundas, of Fingask, who married for his first wife, Jane, daughter of Sir David Carnegie, by his second wife Eupham, and his eldest son and heir was

Sir John Dundas, of Fingask, a devoted Royalist, knighted by King Charles the First, at Dunfermline, in 1633. He married, first, Anne, daughter of Sir John Moncrief, of that ilk, but had no children. He married, secondly, Margaret, daughter of James Dundas, of Dundas, by whom he had an only son, who succeeded him in 1670, as

John Dundas, of Fingask, who married Magdalen, daughter of Thomas Allardice, of Allardice, and was followed in 1724 by his son,

Thomas Dundas, of Fingask. He married Berthea, daughter of John Baillie, of Castlecarry, and had two sons,

Thomas, the elder, his heir, and the younger,

Lawrence Dundas, Esq., of Kerse, Commissary-General and Contractor to the Army from 1748 to 1759, was created a Baronet November 16th., 1762. He married Margaret, daughter of Major Alexander Bruce, of Kennet, and left, at his decease in 1781, an only son,

Sir Thomas Dundas, born in 1741, who was raised to the Peerage, August 13th., 1794, as Baron Dundas, of Aske, in the county of York. He married, May 24th., 1764, Lady Charlotte Fitzwilliam, second daughter of William, third Earl Fitzwilliam, and had, with nine other children, an eldest son,

Lawrence Dundas, second Baron Dundas, born April 10th., 1766, who was further created Earl of Zetland in 1838. His Lordship, Lord Lieutenant and Vice Admiral of Orkney and Zetland, and an Alderman of the City of York, married, April 21st., 1794, Harriot, daughter of General John Hale, of King’s Walden, Hertfordshire, and had twelve children, of whom were—he died February 19th., 1839—

Thomas Dundas, second Earl op Zetland, K.T., Lord Lieutenant of the North Riding of Yorkshire, and Grand Master of the Freemasons of England, born February 5th., 1795, married September 6th., 1823, Sophia Jane, youngest daughter of Sir Hedworth Williamson, Bart. She died May 21st., 1865, and his Lordship May 6th., 1873, without children, when the title and estates went to his nephew,

Lawrence Dundas, third Earl of Zetland, of the Royal Horse Guards Blue, D.L. of Stirlingshire, born August 16th., 1844, married, August 3rd., 1871, Lady Lilian Lumley, third daughter of the Earl of Scarborough, and had, with other children,