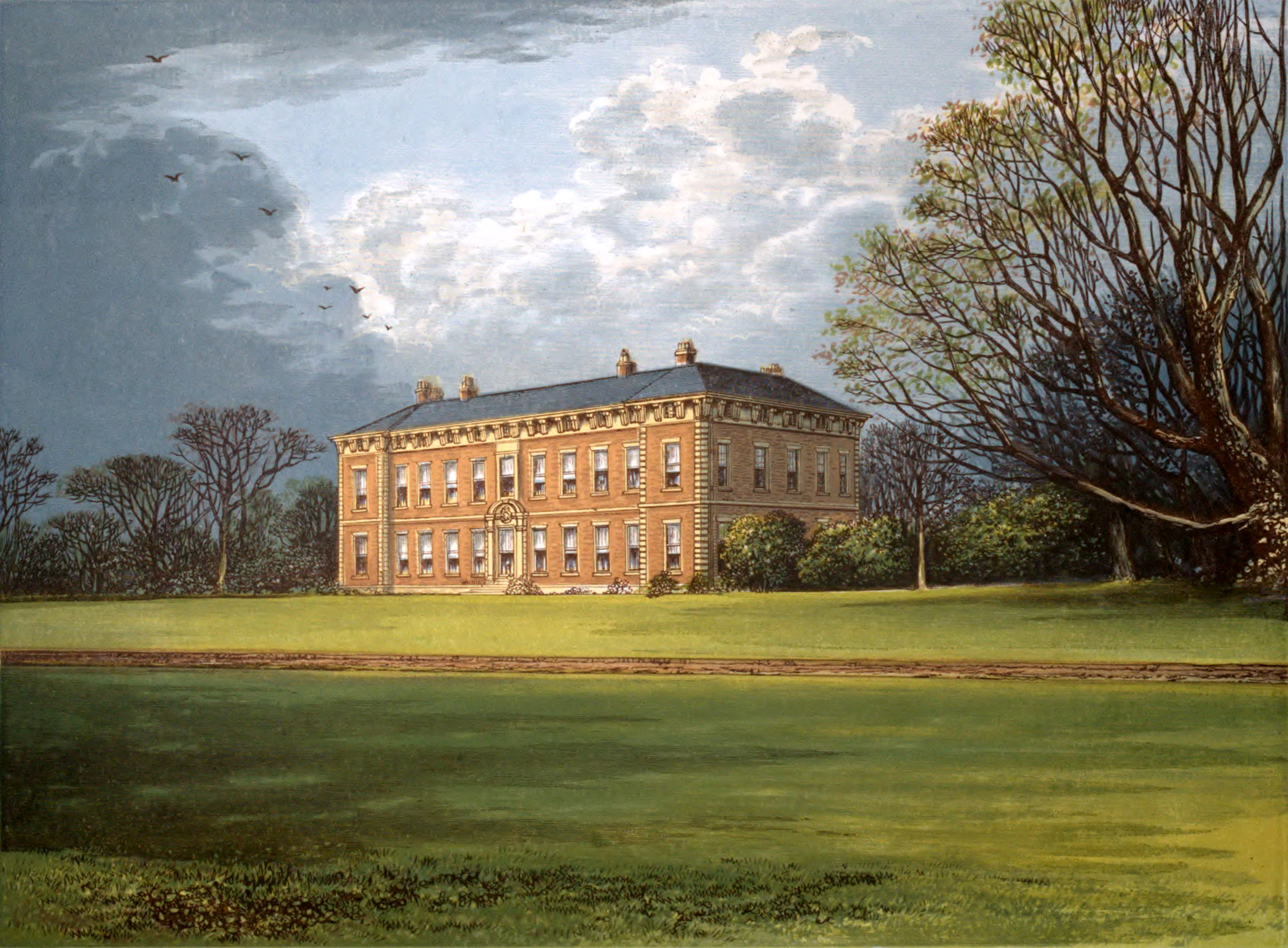 Beningbrough Hall stands on the site of a former mansion, the residence of the old family of Bourchier, now believed to be extinct, at least in that branch of it. The estate was left by the last proprietress to the Honourable and Rev. William Henry Dawnay, Rector of Sessay and Thormanby, who succeeded his brother as sixth Viscount Downe, as presently stated.

The house, which is of brick, with stone quoins, was built by Sir John Vanbrugh. The country around is flat, but the park is well timbered with oak, beech, chestnut, lime, and some fine old elm trees, the latter the remains of the avenues which the architect had planted. The river Nidd and the Ouse flow near it, and join their waters about half a mile from the Hall. It was perhaps as well that they did not do so a little higher up in earlier times, for Sir John Bourchier, who lived on one side of the Ouse, was not only a Parliamentarian, but one of the regicides who signed the death-warrant of King Charles the Martyr, while his neighbour, Sir Thomas Slingsby, who was a devoted Royalist and Cavalier, lived on the other, so that they could not so readily come to blows.

This is one of the numerous families, not a few of them still existent, whose names are inscribed on the Roll of Battle Abbey. It has preserved an unbroken male descent from that day to this, as follows:—

Sir Payn D’Aunay, of Aunay Castle, Normandy, was ancestor of

Sir William D’Aunay, who fought under Richard, “Cœur-de-Lion,” and having slain a Saracen Prince, and afterwards a lion, he cut off the paw of the latter and presented it to the king, who at once gave him a ring from his own finger, and commanded that his cognisance should henceforth be a demi-Saracen holding in one hand a lion’s paw, and in the other a ring, and so it has been borne by the family ever since, and is still. After him,

Sir Nicholas Dawnay, who also fought in the holy war against the Infidels, was summoned to Parliament by Edward the Third. The younger of his two sons,

Thomas Dawnay, married Elizabeth, daughter and heiress of John Newton, Esq., of Snaith, Yorkshire, and was progenitor of

Sir Guy Dawnay, of Cowick, Snaith, tempore Henry the Seventh and Henry the Eighth, and died there in 1552. He married Joan, sister and heiress of John Darrell, of Sessay, near York, and their son succeeded,

Sir John Dawnay, of Cowick, High Sheriff of Yorkshire in the thirty-fifth year of the reign of King Henry the Eighth. His wife was Dorothy, daughter of Richard, Lord Latimer, and at his death, March 2nd., 1553, he was succeeded by his eldest son,

Sir Thomas Dawnay, of Cowick and Sessay, who married Edith, daughter of George, Lord D’Arcy, of Aston, and at his decease, September 3rd., 1556, his elder son,

Sir John Dawnay, of Cowick and Sessay, succeeded. He married Elizabeth, daughter of Sir Marmaduke Tunstall, and their eldest son,

John Dawnay, Esq., of Cowick and Sessay, married Elizabeth, daughter of Sir Richard Hutton, one of the Justices of the Court of King’s Bench, and had two sons, the elder of whom,

Sir Christopher Dawnay, of Cowick and Sessay, was created a Baronet by King Charles the First, May 19th., 1642, with remainder to his brother,

Sir John Dawnay, Baronet, of Cowick and Sessay, M.P. for the County of York in 1660, and raised to the Peerage of Ireland as Viscount Downe, February 19th., 1680. He also had sat in King James’s Irish Parliament in 1689. He married, first, Eliza, daughter of J. Melton, and was succeeded by his only son,

Sir Henry Dawnay, second Viscount, M.P. for Yorkshire in the reigns of William the Third, Queen Anne, and George the First. His Lordship married Mildred, daughter of William Godfrey, Esq., of Thunock, in Lincolnshire, and his son,

of his father, leaving a son, whose grandfather having died in May, 1741, he succeeded the latter as

Henry Pleydell Dawnay, third Viscount, F.R.S., born April 8th., 1727, M.P. for the County of York in 1749 and 1751, Lord of the Bedchamber to H.R.H. the Prince of Wales, and Colonel of the 25th. Regiment of Foot, which he commanded at the battle of Minden, as also at the battle of Campen, near Wesel, October 16th., 1760, when he received a wound of which he died December 9th. of the same year. His brother succeeded him,

John Dawnay, fourth Viscount Downe, who married, May 20th., 1763, Laura, only daughter of William Burton, Esq., of Luffenham, Rutlandshire. He died December 21st., 1780, and was succeeded by his elder son, namely,

John Christopher Burton Dawnay, fifth Viscount, born November 15th., 1764, created a Peer of Great Britain, June 9th., 1796, as Baron Dawnay, of Cowick, in the County of York. He married, December 31st., 1815, Louisa Maria, daughter of George Welsted, Esq., of Apsley, but dying without children, February 18th., 1832, he was succeeded in the title by his next brother,

The Rev. William Henry Dawnay, sixth Viscount Downe, Rector of Sessay and Thormanby, Yorkshire, born August 20th., 1772, who married, June 4th., 1811, Lydia, only daughter of John Heathcote, Esq., of Conuington Castle, and had three children, of whom the second was (the eldest succeeding as seventh Lord Downe)