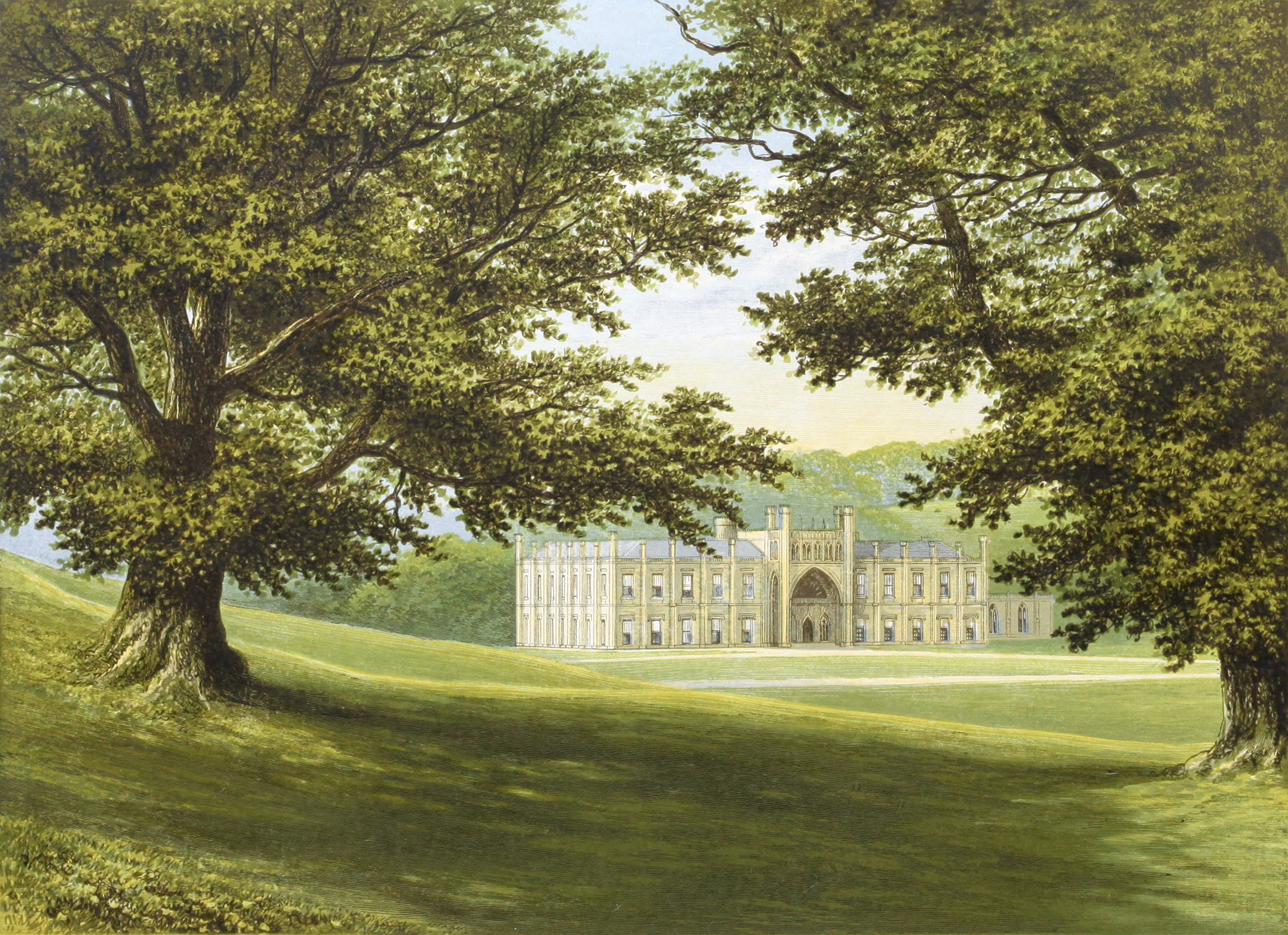 The manor of Donington, which, occupies the site of what in Domesday Book is called “a great wood of oak,” was anciently held by Thomas Plantagenet, Earl of Lancaster, Leicester, and Derby, and was bought in the year 1594 by George, Earl of Huntingdon, who pulled down the old castle, and built a new residence. “The Gothic entrance-hall is twenty-four feet square, the dining-room forty-eight feet by twenty-four, and the drawing-room forty by twenty-four. The library is seventy-two feet by twenty-six, and contains towards twenty-five thousand volumes, besides many rare manuscripts.”

The place is situated near the small country town of the name, from which it is called, about ten miles from Loughborough and eighteen from Leicester. It was formerly annexed to the Castle at Castle Donington, the favourite residence of John of Gaunt.

The scenery all around is very attractive, the house being at the junction of three small valleys, well adorned with noble trees of ancient growth, venerable oaks, which undoubtedly date from the Conquest, and others. There is a tradition that Chaucer the Poet constantly sat under the shade of one of the oaks, still standing as of yore, forty-four feet in girth. On one side is seen Donington Cliff, which abuts on the silver Trent, and here also the church of Weston-on-Trent with its tapering spire comes into view. In the distance are to be seen the Peak of Derbyshire, and nearly the whole of Nottinghamshire, a truly magnificent panorama.

This park was held by lease from the Crown by William, Lord Hastings, Edward the Fourth’s celebrated Chamberlain, who was afterwards beheaded by Richard the Third. It continued to be so held by his descendants, the Lords Hastings, Earls of Huntingdon, until the reign of Elizabeth, when it was purchased from the Sovereign.

After the destruction of Ashby-de-la-Zouch Castle by the Roundheads, the Hastings family retired to this spot, where up to that time there had only been a keeper’s lodge, and after making additions to it, established themselves there until the death of Francis, tenth Earl of Huntingdon and twelfth Baron Hastings. He was the last Earl of the direct line, and at his death in 1789, unmarried, his titles, except the Earldom—supposed to be then extinct—passed to his nephew, Francis, Earl of Moira, the well-known Governor-General of India, 1813 to 1823, subsequently created

This nobleman built the present house in the year 1793, incorporating with it the walls of the older one, which was rendered interesting as having been dwelt in by the saintly Selina, Conntess of Huntingdon, the patroness of Wesley and Whitfield. It was also the resort of men who were celebrated in art, literature, and politics, among whom was Moore the Poet, who lived here for two years, and thus described the scene—

“Where silvery Trent his mazy colours pours,
And Donington’s old oaks to every breeze
Whisper the tale of bygone centuries.”

Here, too, lived Lady Flora Hastings, whose poems and whose sad history need no comment; and here also during the French emigration resided Charles X. and his sons, as guests of Lord Moira, whose magnificent hospitality is said to have extended to leaving cheque-books signed in the rooms of his royal guests, to be filled up at their pleasure!

Wood and water, the flowing river, the church, gently swelling hills, and retired valleys, form together a thoroughly English scene, such as indeed our land abounds with, but at the same time each possessing a beauty of its own.

“Paintings by the old masters adorn every room, and the series of portraits of the Plantagenet kings, from whom the family of Hastings descends, is very valuable.” Many of these family pictures, from the time of Edward IV. to the present day, are of great interest, among them being works by Holbein, Rubens, Vandyke, Jansen, Gainsborough, Romney, Reynolds, etc.; as also busts of Charles X. and his sons, presented by them to Lord Moira.

Charles Frederick Clifton, Esq., third son of Thomas Clifton, Esq., of Clifton and Lytham, Lancashire, married, April 3rd., 1853, Lady Edith Maud Rawdon- Hastings, and assumed the name and arms of Abney-Hastings only, in compliance with the conditions of a settlement of his estate on her Ladyship by Sir Charles Abney-Hastings, Bart., in 1844. Lady Edith Abney-Hastings became, on the death of her brother, the fourth Marquis of Hastings and Earl of Loudoun, November 10th., 1808, tenth Countess of Loudoun, Baroness Tarrinzean, Mauchline, and Campbell of Loudoun, in the Peerage of Scotland; and in 1871 Her Majesty was graciously pleased to call out of abeyance in the Countess’ favour the Baronies of Botreaux, Hungerford, De Moleyns, and Hastings, in the Peerage of England. The Countess died January 23rd., 1874.