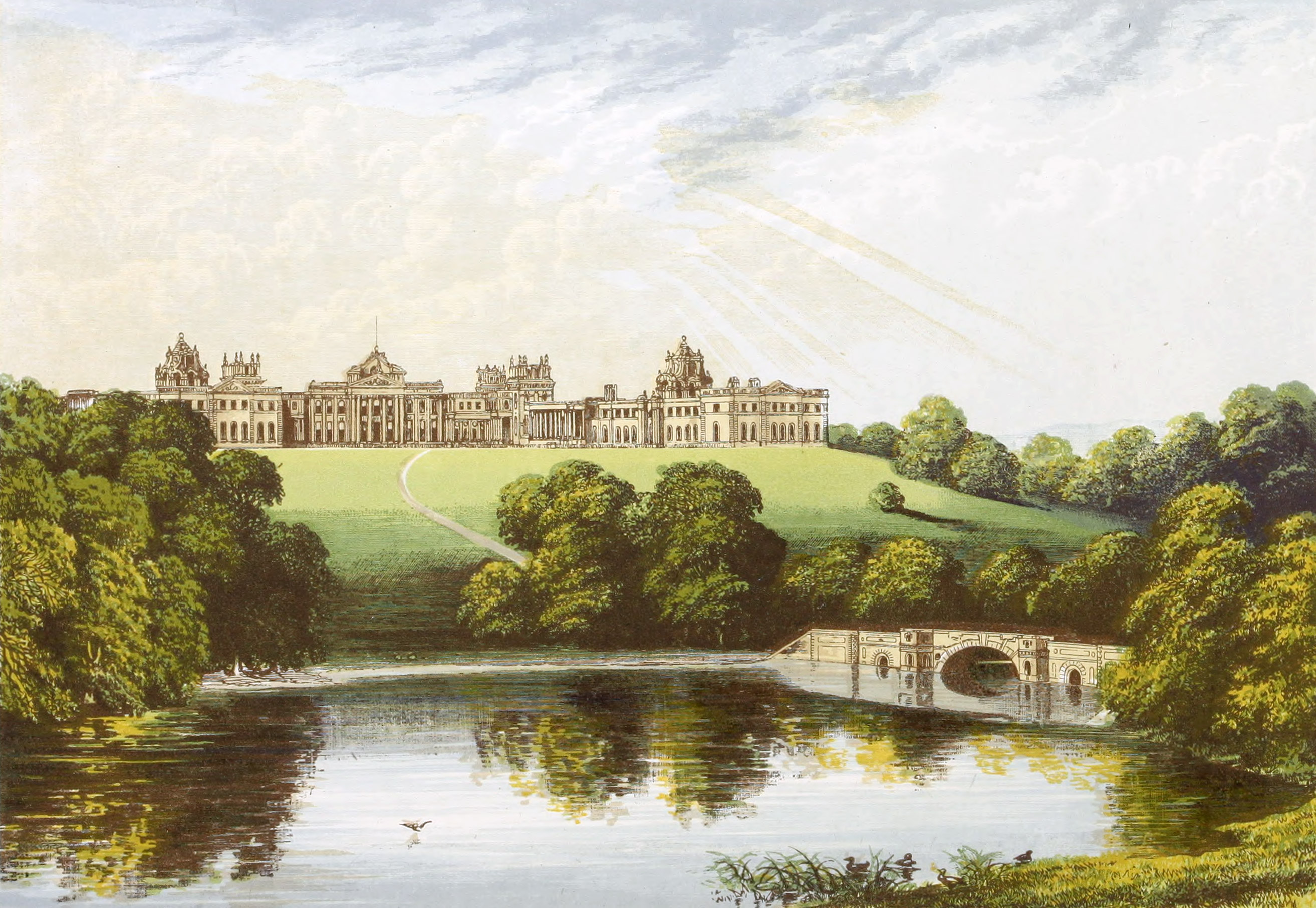 Near Woodstock, Oxfordshire.—Duke of Marlborough.

“If nothing were to be seen in England but this seat, with its park and treasures of art,” writes Dr. Waagen, the Director of the Royal Gallery at Berlin, “there would be no reason to repent the journey to this country. The whole is on so grand a scale, that no prince in the world would need to be ashamed of it; and at the same time it is a noble monument of the gratitude of the English nation to the great Duke of Marlborough.”

In the year 866 King Ethelred held a Parliament in Woodstock Palace. His successor, in 872,

Alfred the Great, occasionally resided there when not engaged in war, and is stated in a MS. in the Cottonian Library to have found leisure to translate “Boethius de Consolatione,” and about the same time to have founded or restored the University of Oxford.

King Henry the First repaired or rebuilt the palace, and built a wall round the park.

Henry the Second received here the homage of Malcolm King of Scotland, and Rees Prince of Wales, in 1164.

Edward the First called a Parliament at this place in 1275; and here his second son, Edward, was born, thence named Edward of Woodstock.

Blenheim Palace was built by Sir John Vanbrugh, the architect, at the public expense, in the reign of Queen Anne, half a million of money being voted for its completion; and was conferred, together with the Honour of Woodstock, on John Duke of Marlborough, as a memorial of the royal favour and the gratitude of the public for the very great victories he had gained over the French and Bavarians, particularly that near the village of Blenheim on the 2nd. of August, 1704. On the anniversary of the day every year a standard with the fleurs-de-lys painted on it is rendered at Windsor Castle as a quittance for all rent, suits, and services due to the crown, and in consequence a long series of flags is there exhibited.

The apartments which are too numerous to be particularized, are nobly proportioned, and the architectural grandeur of the various rooms is abundantly supported by the richness of the furniture and fittings, and the value and beauty of the works of art and vertû that adorn them. In the library, which contains one of the largest collections of books in the country, is a statue of Queen Anne, by Rysbrach, as also a bust of Alexander the Great, from Herculaneum. In the chapel is the monument by Rysbrach, of the great Duke of Marlborough, 1722. The house has also an observatory and a theatre.

In the park is a fine expanse of water, over which is a bridge of three arches, the central one, one hundred and one feet span, being larger than that of the Rialto at Venice. In the grounds are also a temple of Diana built by Sir William Chambers; a column one hundred and thirty feet high, with a colossal statue of the great Duke at the top, and a record of his principal achievements on the pedestal; a triumphal arch, and numerous pieces of statuary.

The family of the Duke of Marlborough derives from Sir Robert Spencer, of Wormleighton, in the county of Northumberland, raised to the peerage by the title of Baron Spencer of Wormleighton, and whose descendant, Charles, fifth Earl of Sunderland, to which dignity the third baron had been elevated, brought the dukedom of Marlborough into the family on the demise of his aunt Henrietta, created Duchess of Marlborough under a special act of Parliament, his father, the third Earl, having married her next sister Lady Anne Churchill.

The family of Churchill was stated by Dr. James Anderson, in his genealogical tables, to be derived from Gitto de Leon, a Frenchman, whose son Wandril was Lord of Courcil, the name afterwards being altered to Chirchil, and then to Churchill.