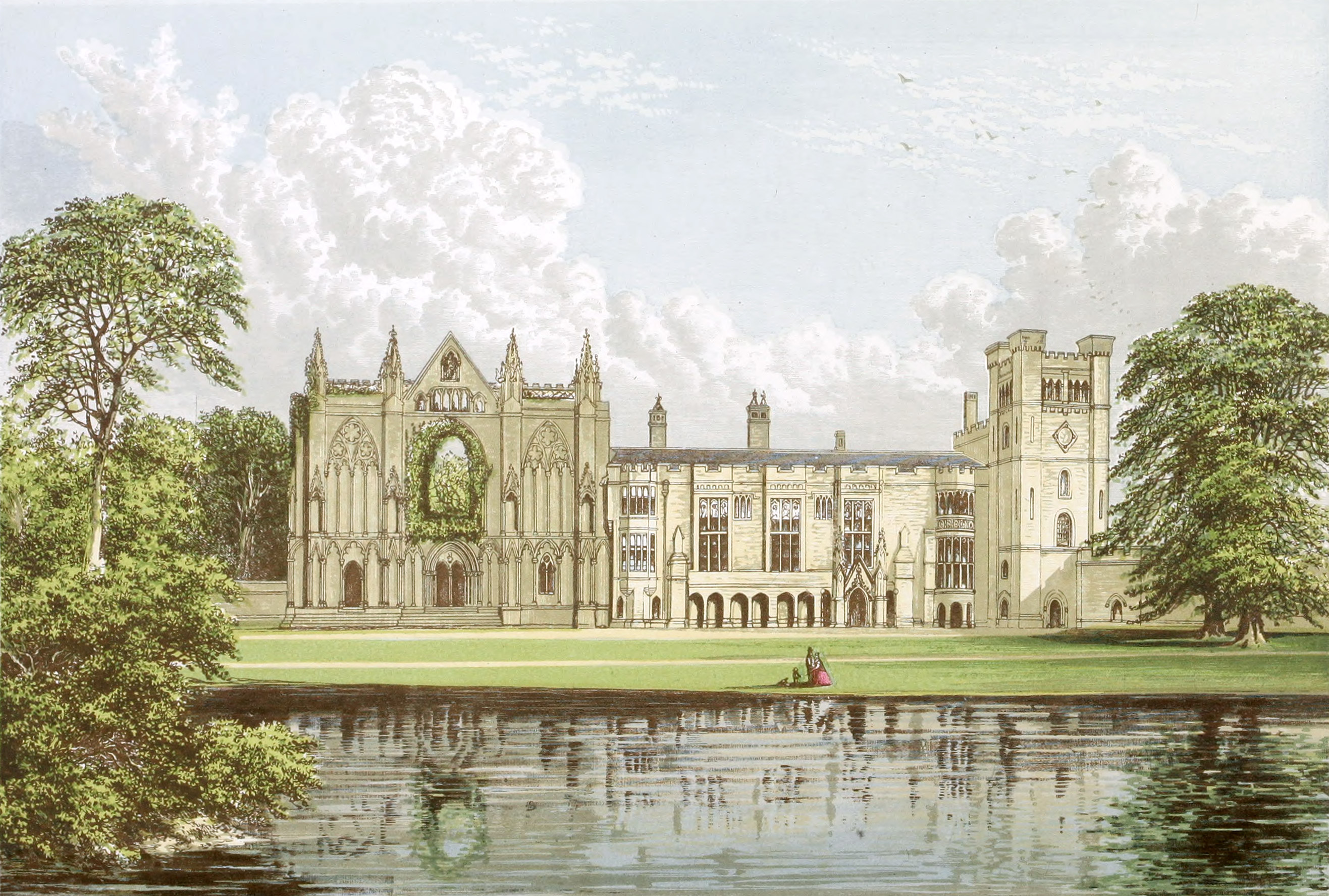 Newstead Abbey, “one of the finest specimens in existence of those quaint and romantic piles, half castle, half ornament, which remain as monuments of the olden times of England,” is situated about five miles from Mansfield and nine miles north of Nottingham. It was originally a Friary of Black Canons, founded by Henry the Second in the year 1170. At the dissolution of the monasteries it was granted to Sir John Byron, Lieutenant of Sherwood Forest. It was besieged by the parliamentary forces, and after the murder of King Charles the First was confiscated by the Puritans, but was restored by Charles the Second to Lord Byron, who, in reward of his loyalty to the throne had been raised to the Peerage by Charles the First. It continued in the family till the year 1815, when it was sold to

Colonel Wildman, and afterwards to

Outside the building the principal objects worth seeing are a noble oak tree, a

relique of the ancient forest; the upper lake, formed by keeping up the waters of the river Leen; the lower lake; and an aviary.

Inside are the entrance-hall; the monks’ parlour, or reception room; the haunted chamber; the eastern corridor; the tapestry bedroom; the tapestry dressing-room; King Edward the Third’s bedroom; King Henry the First’s lodgings; the Duke of Sussex’s sitting-room; the grand dining-hall; the breakfast-room; the cloisters; and the chapel.

In the following lines written by Lord Byron, he had Newstead in view; but the verses, me judice, are unworthy of the subject, an instance, itnum e multis, by way of proof, how much a poet may be over-rated in his lifetime, to find his level in the deserved neglect of his writings in the next generation.

“Before the mansion lay a lucid lake,
Broad as transparent, deep, and freshly fed
By a river, which its soften’d way did take
In currents through the calmer water spread
Around: the wildfowl nestled in the brake
And sedges, brooding in their liquid bed:
The woods sloped downwards to its brink, and stood
With their green faces fixed upon the flood.

“Amidst the court a Gothic fountain play’d,
Symmetrical, but deck’d with carvings quaint—
Strange faces, like to men in masquerade,
And here perhaps a monster, there a saint:
The spring gush’d through grim mouths of granite made,
And sparkled into basins, ‘where it spent
Its little torrent in a thousand bubbles—
Like man’s vain glory, and his vainer troubles.”

The owner of Newstead Abbey is the son of Frederick Webb, Esq.