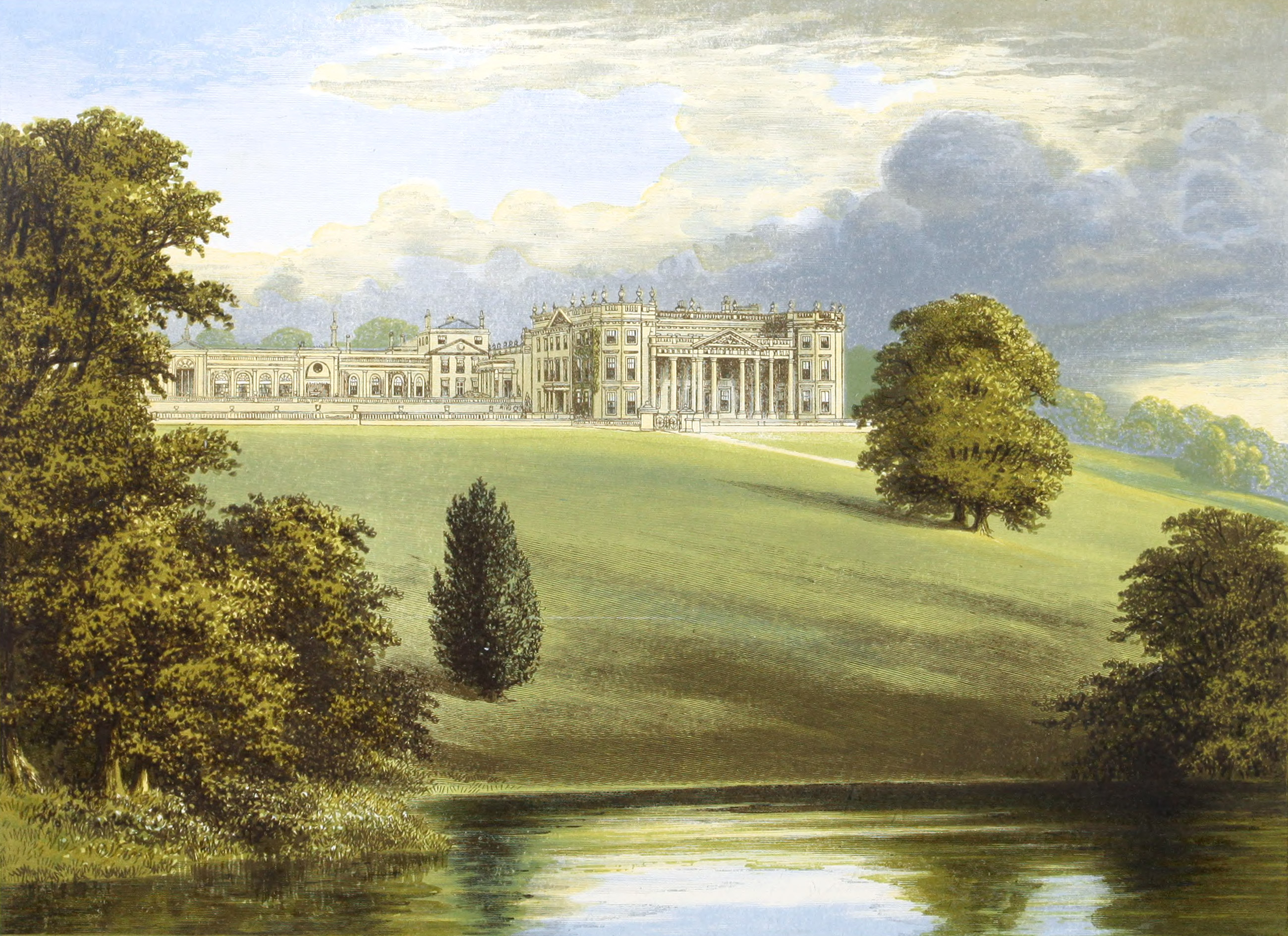 Near Calne, Wiltshire.—Marquis of Lansdowne.

Bowood was anciently part of a very extensive forest, which extended for many miles.

In Cromwell’s time it was forfeited to the use of the Commonwealth.

It next was granted by King Charles the Second to Sir Orlando Bridgeman, but he having died insolvent, it was purchased of his creditors by the Earl of Shelburne, and in his family it has since continued.

Walter Fitz Otho, Castellan of Windsor in the eleventh century, was father of

William Fitzgerald, married Catherine, daughter of Sir Adam de Kingsley, of Cheshire, and died in the year 1173. He had seven sons, of whom the eldest,

Maurice Fitz-Reymond, married, for his first wife, Johanna, daughter of Miles Fitz-Henry, Chief Governor of Ireland, by whom he had a son,

Thomas Fitz-Maurice, who became Lord of Kerry and Lixnaw. He married Grace, daughter of Domhual Caombhnagh (Cavenagh), son of Dermoid, King of Leinster, and dying in 1280, was succeeded by his eldest son,

Maurice Fitzmaurice, second Lord of Kerry, who sat in the Parliament of Dublin, 1295, and served in Scotland under Edward I. He married Mary, daughter and heiress of Sir John Mc’Leod, of Galway, and died in 1303. His eldest son,

Nicholas Fitzmaurice, third Lord of Kerry, was followed by

William Fitzmaurice, twentieth Lord of Kerry and Lixnaw, born in 1633, married Constance, daughter of William Long, Esq., and died in 1697, his eldest son being

Thomas Fitzmaurice, twenty-first Lord of Kerry, created, January 17th., 1722, Viscount Clanmaurice, and Earl of Kerry. He married, in 1692, Anne, only daughter and heiress of Sir William Petty, by whom he left

1. William Fitzmaurice, second Earl of Kerry, who, by his second wife, Gertrude, only daughter of Richard, fourth Earl of Cavan, had, with a daughter, married to Maurice Fitzgerald, Knight of Kerry, an only son, Francis Thomas Fitzmaurice, third Earl of Kerry, married Anastasia, daughter and coheiress of Peter Daly, Esq., but dying childless, July 4th., 1818, his honours devolved on his cousin, Henry, third Marquis of Lansdowne, (as hereafter stated).

The Hon. John Fitzmaurice, having inherited the estates of his maternal uncle, Henry Petty, Earl of Shelburne, in April, 1751, (when that Earldom expired), assumed the additional surname and arms of Petty, and was advanced to the Peerage of Ireland October 7th., 1751, as Baron Dunkerron and Viscount Fitzmaurice, and further advanced June 26th., 1753, to the Earldom of Shelburne. He married, in 1734, his cousin Mary, daughter of the Hon. William Fitzmaurice, of Gallane, Kerry, and was created a Peer of Great Britain, May 17th., 1760, as Baron Wycombe, and dying May 10th., 1761, was succeeded by his eldest son,

William Petty Fitzmaurice, second Earl of Shelburne, a General in the Army, and a distinguished statesman in the reign of George the Third, Secretary of State, and appointed Prime Minister in 1782. He was advanced, December 6th., 1784, to the dignities of Earl of Wycombe, Viscount Calne and Calnstone, and Marquis of Lansdowne. He married, first, in 1765, Sophia, daughter of John, Earl Granville, by whom he left one son, his successor; and, secondly, in 1779, Louisa, daughter of John Fitzpatrick, Earl of Upper Ossory, by whom he had another son, Henry, third Marquis. Theelder,

John Petty Fitzmaurice, second Marquis, married, May 27th., 1805, Lady Gilford, widow of Sir Duke Gifford, of Castle Jordan, Ireland, but died without issue, November 15th., 1809, when the honours devolved on his half brother,

Lord Henry Petty Fitzmaurice, third Marquis, born July 2nd., 1780, who succeeded also, July 4th., 1818, to the titles of the House of Kerry, on the demise of his cousin. He married, March 30th., 1808, Louisa Emma, fifth daughter of Henry Thomas, third Earl of Ilchester, and had two sons, the second of whom,

Henry Charles Keith Petty Fitzmaurice, fifth Marquis of Lansdowne, a Lord of the Treasury, Under Secretary of War from 1872 to 1874. He married, November 8th., 1869, Lady Maud Evelyn Hamilton, youngest daughter of James, Duke of Abercorn, K.G., and had, with other children,