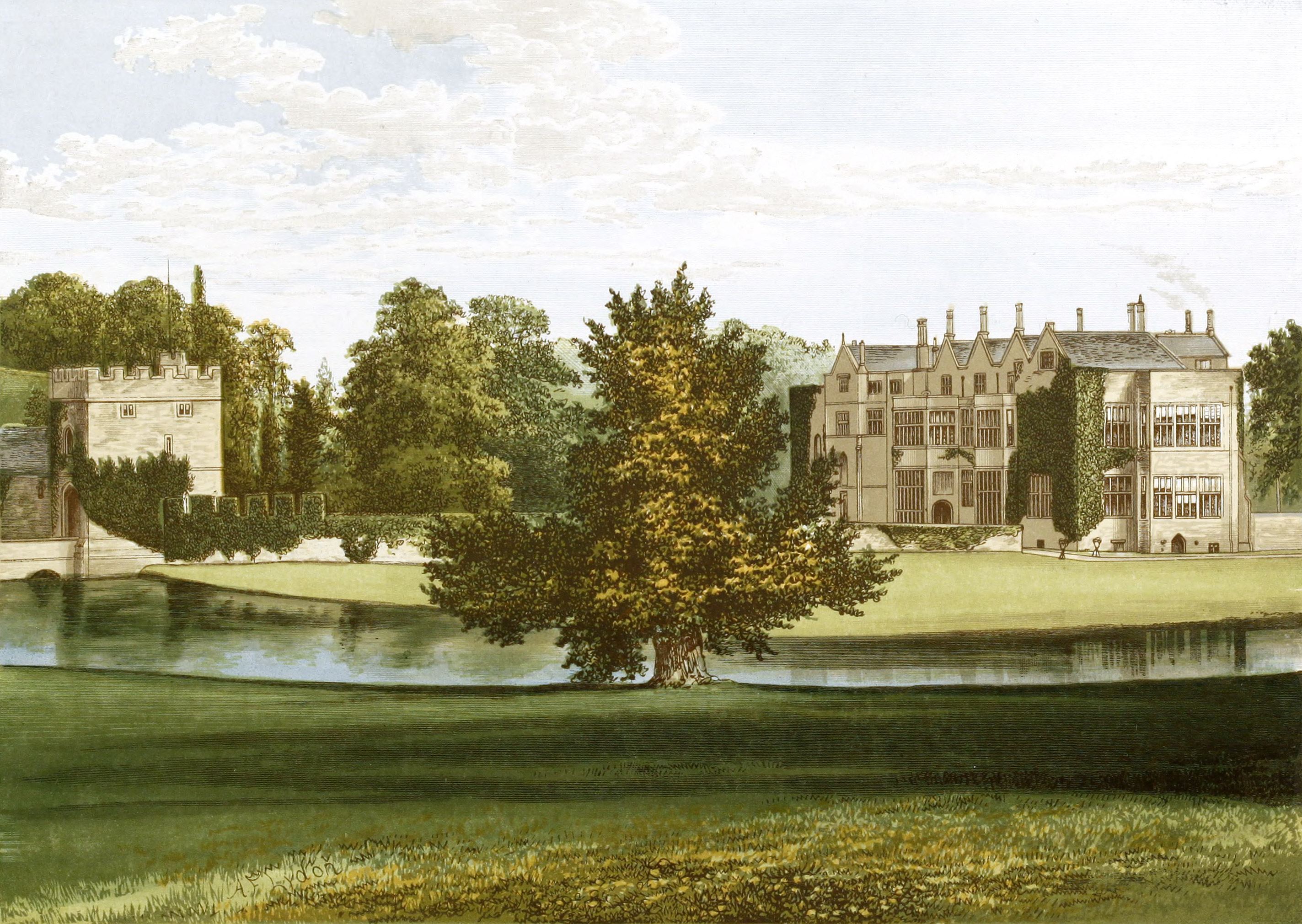 Near Banbury, Oxfordshire.—Lord Saye and Sele.

Broughton Castle, three miles from Banbury, the seat of Lord Saye and Sele, is built of the substantial yellow stone of the country.

The house and grounds are completely enclosed by a remarkably fine wide moat, the only entrance being by a bridge and gateway on the south side. Built by the De Broughtons in the latter period of Edward the First’s reign, the castle and estate was purchased by William of Wykeham in 1377, and passed by will to Sir Thomas Wykeham, his great-nephew and heir, whose eventual heiress, Margarette, intermarried with Lord Saye and Sele who fell at the Battle of Barnet, 1471, and of which marriage the present Lord Saye and Sele is the heir general.

Sir Thomas and Lady Wykeham lie interred in the chancel of Broughton Church.

At the eastern end of the hall, which is fifty-one feet by twenty-eight, is a beautiful groined passage leading to the stairs of the chapel and priest’s room. Of the deco- rated early English chapel too much cannot be said in praise. It is of small dimensions, but lofty, and occupying the height of two of the other stories. In the southern wall are five small lancet arches, through which the worshippers in the southern room, above the chapel, could hear and see the ofiiciating priest. A large aperture also exists for this purpose on the western side. The east end is almost entirely occupied by a large three-light window, with geometrical tracing. Under the window is the original altar slab, with the cavity on its north side testifying to its genuineness. It is of stone, and supported on three brackets. The floor of the chapel is paved with the original encaustic tiles of good and valuable patterns.

The Hall, though converted from the Medieeval into the Tudor style in 1554, retains its original plan and proportions. The west end, leading from it, was at the same time converted into two magnificent rooms, a dining and a drawing room, with pro- jecting bay windows, and having internally rich renaissance fire-places with splendid ceilings. In the dining-room is a curious internal porch. These rooms are forty-two feet by twenty-three each.

At this end a noble staircase ascends to the corridor, eighty-nine feet long, and to the Council Chamber, in which, between the dissolution of the Short Parliament and the meeting of the Long Parliament, Pym, Hampden, Oliver, St. John, Lord Brook, Lord Saye and Sele, the Earls of Bedford, Warwick, and Essex, Nathaniel Fiennes, and Sir Harry Vane the younger were wont to assemble and take measures to resist the court’s arbitrary measures. Near the Council Cliamber a door opens on tlie leads, whence is a glorious view of the sweeping moat, formed from the junction of three brooks, and of the hills surrounding the venerable castle.

Taken altogether, Broughton Castle is a most interesting building, whether we regard the earlier portions of it, or the transition alterations thereof from the castellated to the domestic period.

Seen either from the north-west or the north-east, the church, the gateway, the stables, and the castle, with its gables and chimneys, harmonize finely with the stately trees and moat with which they are surrounded.

King James the First of England and Sixth of Scotland honoured Lord Saye and Sele by a visit to Broughton Castle in September, 1604, and the sermon preached by His Majesty’s Chaplain, Thomas Playgere, in Broughton Church, is in print, and speaks of the then abundant harvest.

Lord Saye and Sele, the twentieth in descent from Geofirey, Lord Saye, one of the twenty-five barons who compelled King John to grant the Great Charter, succeeded as thirteenth Baron March 31st., 1847, and as a Clergyman of the Church of England became Archdeacon of Hereford.