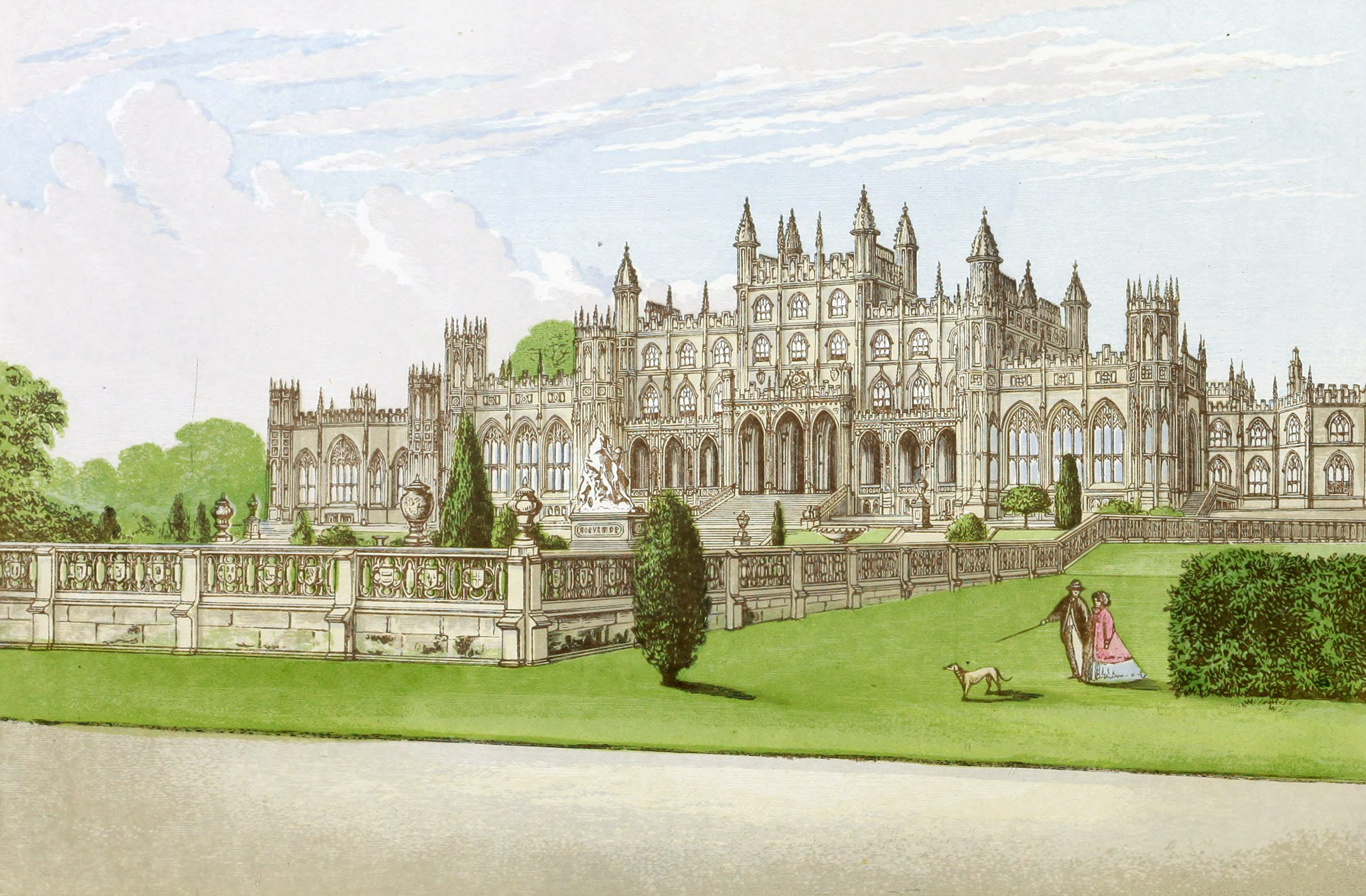 Near Chester, Cheshire.—Duke of Westminster.

In the reign of Henry III. the manor of Eton was possessed by Hamon de Pulford, whose son

Richard took his name of Eton from the place itself, and it continued with his descendants, the Etons, till after the death of

John Eton, whose daughter and heiress,

Joan Eton, by her marriage with Ralph, second son of Sir Thomas Grosvenor, conveyed it into the family of the present owner.

At the close of the last century Eaton Hall was a heavy brick mansion, built by the architect, Sir John Vanbrugh, on whom the sarcastic epitaph was written.

“Lie heavy on him, earth, for he
Laid many a heavy load on thee.”

The gardens, too, were formed on a corresponding model, diversified with straight walks and leaden statues.

In the year 1803, the whole, with the exception of the basement storey, was pulled down by the then Marquis of Westminster, and the present pile erected in its stead, but owing to its great size and ornamented character, several years elapsed before it was finished, and it was not till 1825 that the main building was completed. It consists of a centre and two wings, each differing in design from the other.

In the middle of the west front is a large portico, sustained by clusters of columns, under which there is a carriage-way to the steps before the principal entrance-hall.

The eastern front has a cloister along its whole length, and leads to a terrace three hundred and fifty feet long, from which an admirable view of the grounds and neighbouring country is obtained.

The grand entrance-hall is forty-one feet long by thirty-one feet wide, and is two storeys in height.

The ante-drawing-room is painted in arabesque.

The drawing-room is of the same form as the dining-room, namely, fifty feet long and thirty-seven feet wide, and contains also many paintings of value.

The library is one hundred and twenty feet long, but of different degrees of width, and from it the view through the corridor to the further end of the house is a distance of four hundred and seventy-two feet. The book-cases in it are of carved oak, and contain many very valuable manuscripts, and a large portion of the famous lost record denominated “The Cheshire Domesday.”

The great staircase, state apartments, and the tenants’ hall, are all of corresponding size and ornamentation.

The flower-gardens cover full fifty acres of ground, and they, too, when the house was pulled down, received the like share of alteration and improvement.

The principal entrance is through the Chester Gateway, an imposing structure.

The views in the neighbourhood are very fine, embracing towards the west the Welsh mountains; towards the east the Peckforton Hills, with the crag on which stand the ruins of Beeston Castle; on the south the Dee follows its winding course, the gardens sloping down to its bank; and at the distance of a mile and a half the parish church of Ecleston, a beautiful Gothic building, adds the last feature, which may be said to be wanting to no country house in England.

There is a large collection of valuable pictures, among which are,—Our Saviour on the Mount of Olives, by Claude Lorraine, said to be the largest picture ever painted by that artist; A View of the Mediterranean, by Vernet; David and Abigail, by Rubens; Rubens and his second Wife, by himself.

The family of Grosvenor is of French extraction, and is stated to be composed of the words “gros” and “veneur.” It deduces from Gilbert Le Grosvenor, a companion of the Norman William I.