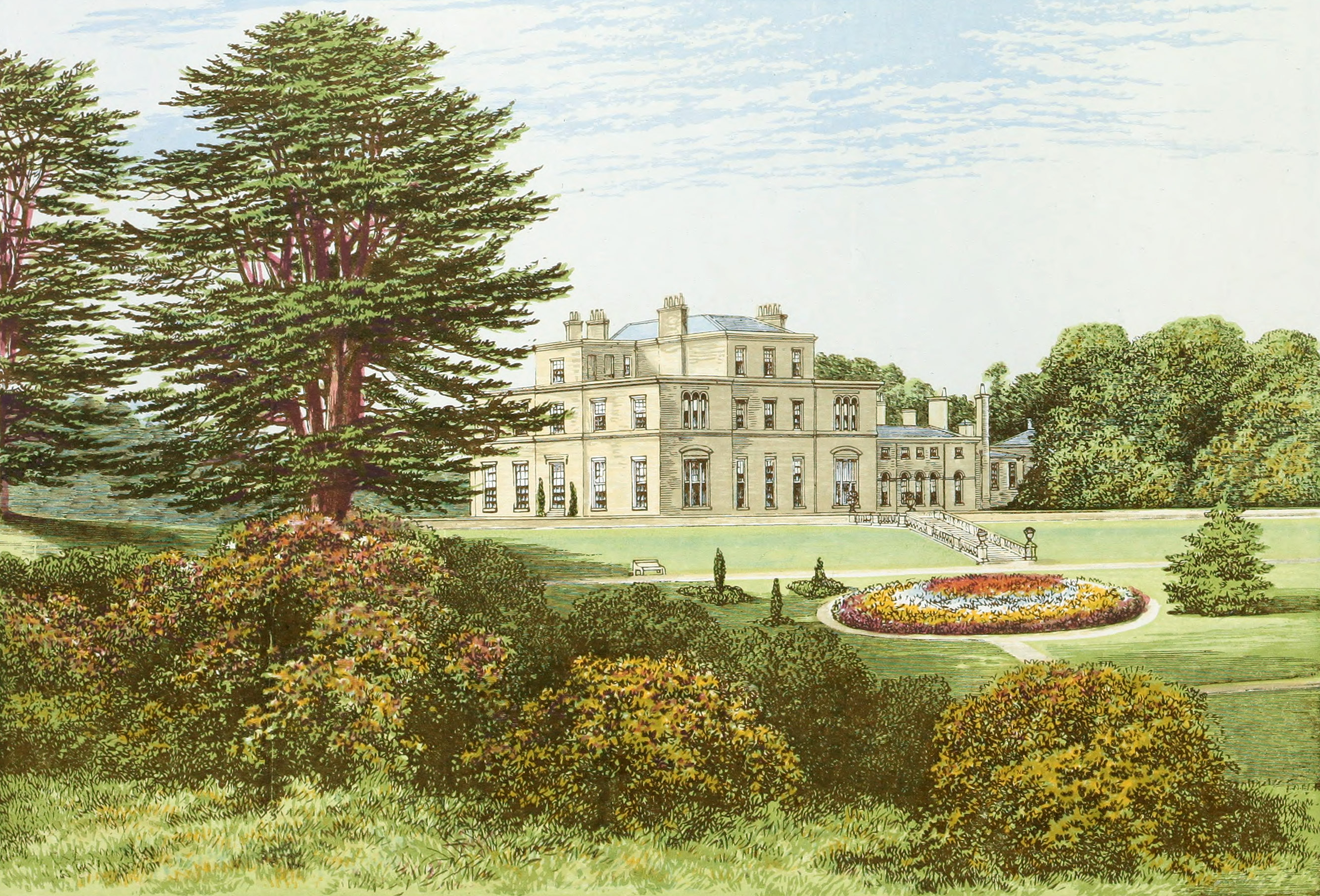 “The martial and warlike family” of Musgrave, as it is styled by Camden, the author of the “Britannia/’ was originally of Musgrave, in Westmoreland, but coming- into possession of Eden Hall by the marriage of Thomas de Musgrave with Joan de Stapleton, this thereupon became their seat, and has so continued till the present day.

It is a lovely spot, situated in the forest of Inglewood, and was first granted to Henry Fitzweine, and afterwards belonged to one

Robert Turpe, left two daughters his co-heiresses, one of whom,

Julian Tuepe, wedded, A.D. 1327, William Stapleton, and their descendants held the property for four generations, when it was carried to the family of

Musgrave, as above stated.

The house is a handsome building of stone, and among other ancient reliques

which it contains, is the famous old glass cup called “The Luck of Eden Hall.” The sacred monogram I.H.S. shows it to have been hallowed in old times by Church use, but tradition records it to have been seized from a company of fairies who were sporting near a spring in the garden, and who, having vainly endeavoured to recover it, vanished into air singing,

“If that glass either break or fall,
Farewell the luck of Eden Hall.”

It has not fallen or been broken yet, and is preserved with the greatest care, being- only used on far-between occasions, when it is filled to the brim with wine of the rarest vintage, and whoever takes it into his hand is expected to drain it at a draught.

One of the ancestors of the present family,

Sir Philip Musgrave, fought gallantly under the royal banner at Marston Moor, at Worcester, and in the Isle of Man, and after the Restoration had a warrant raising him to the peerage as Baron Musgrave of Hartley Castle, but the patent was never taken out. His grand-uncle, Thomas Musgrave, had a controversy with Lancelot Carleton, and the following indenture shows the ancient form and manner of proceeding to a trial of arms at single combat:—

“It is agreed between Thomas Musgrave and Lancelot Carleton, for the true trial of such controversies as are betwixt them, to have it openly tried by way of combat, before God and the face of the world, in Canonby Holme, before England and Scot- land, upon Thursday in Easter week, being the 8th. day of April next ensuing, A.D. 1602, betwixt nine of the clock and one of the same day: to fight on foot; to be armed with jack and steel caps, plaite sleeves, plaite breeches, plaite socks, two swords, the blades to be one yard and half a quarter of length, two Scotch daggers or dirks at their girdles, and either of them to provide armour and weapons for themselves, according to this indenture. Two gentlemen to be appointed in the field to view both the parties, to see that they both be equal in arms and weapons, according to this indenture; and being so viewed, the gentlemen to ride to the rest of the company, and to leave them; but two boys, received by the gentlemen, to be under sixteen years of age, to hold their horses. In testimony of this our agreement, we have both set our hands to this indenture of intent: all matters shall be made so plain as there shall be no questions to stick upon that day; which indenture as a witness shall be delivered to two gentlemen; and for that it is convenient the world should be privy to every particular of the ground of the quarrel, we have agreed to set it down in this indenture betwixt us, that, knowing the quarrel, their eyes may be witness of the trial.

“The grounds of the quarrel:—

“2. He charged iiim that, whereas Her Majesty doth yearly bestow a great fee upon him as Captain of Bewcastle, to aid and defend Her Majesty’s subjects, therein Thomas Musgrave hath neglected his duty, for that Her Majesty’s Castle of Bewcastle was, by him, made a den of thieves, and an harbour and receipt for murderers, felons, and all sorts of misdemeanours, etc.