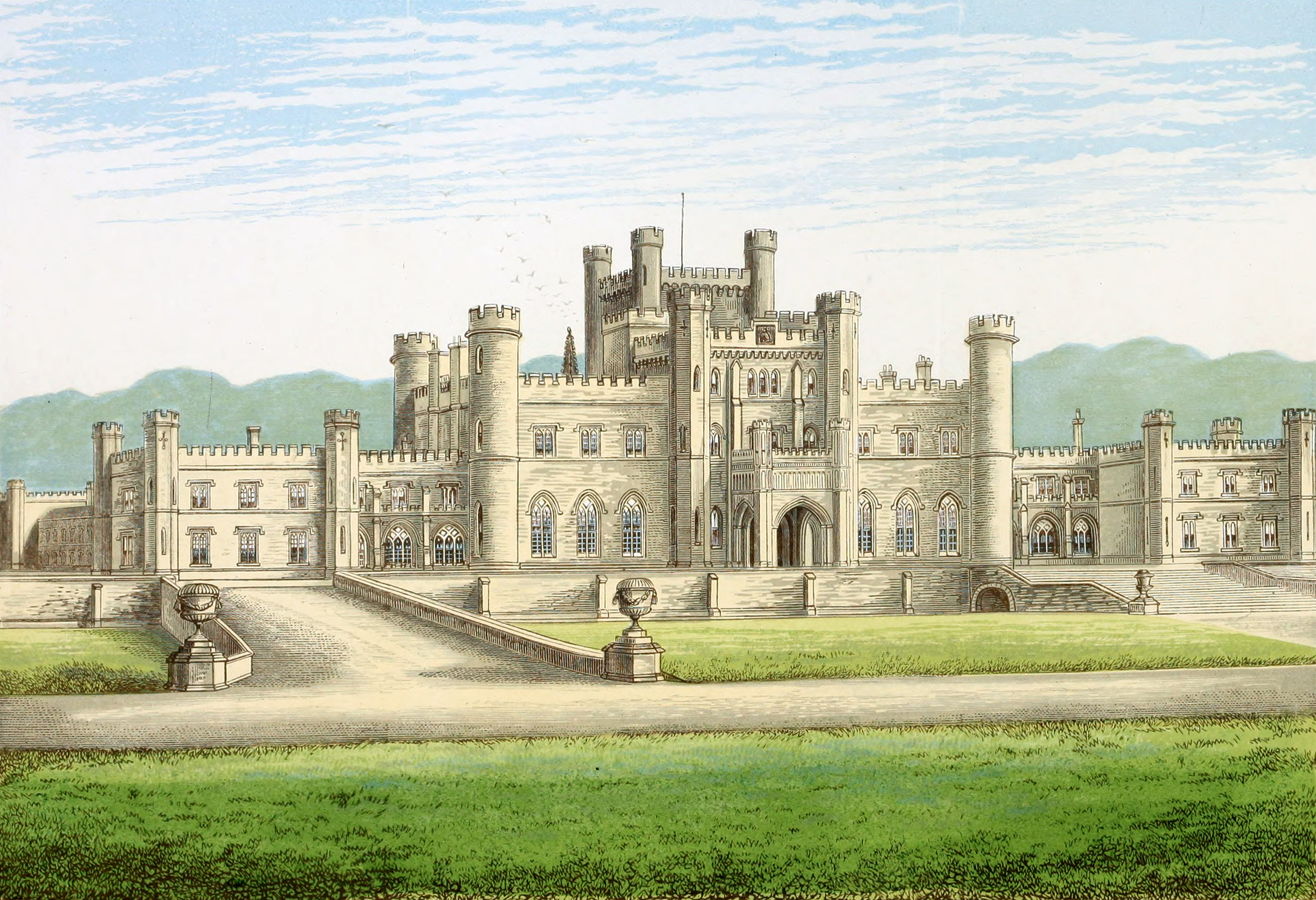 Near Clifton, Westmoreland.—Earl of Lonsdale.

The castle of Lowther, which gives its name to the family of Lowther, derives its own from the river Lowther, or Louder, by which it is watered.

Lowther Hall of the older date was pulled down in the year 1685, and rebuilt by John, first Viscount Lowther. It was burnt to the ground in 1720, that is to say, the two wings excepted.

It was built again in 1808, the necessary materials of stone and timber having been collected for the purpose previously by the first Earl Lowther.

The north front, which is surmounted by eight lofty turrets, is four hundred and twenty feet long. In the centre of it is a noble open porch large enough for the entrance of carriages.

The south front is two hundred and eighty feet long, the grand saloon being in the middle, and other magnificent apartments on either side of it. The view to the north embraces the Beacon Hill, near Penrith, Saddleback, which rises three thousand and forty-eight feet above the level of the sea, and the mountains of Scotland in the distance.

The great terrace is nearly a mile in length, and overlooks a portion of the park with its forest trees of large growth and scattered herds of antlered deer.

“In Henry the Second’s time the manor of Lowther would seem to have been divided into three parts, for in that reign Humphrey Machel gave a third part of the Church of Lowther to the priory of Carlisle. In 1278 one of these portions was divided between co-heiresses, married to Robert de Morville and Gilbert de Whiteby, while the other two pertained to the priory of Wotton and William de Strickland. In the year 1309 it was held of the Cliffords by the heir of John de Coupland, Henry de Haverington, Simon de Alve, and the priory of Wotton; and in 1314 the moiety of Simon de Alve was possessed by Hugh de Lowther. In 1421 Sir Robert de Lowther held the whole of this manor by the cornage of twenty shillings and fourpence.”

The following is the account of the impression the beauty of the place made upon Lord Macartney, who had seen more of the world than most people:—“I wandered in Van-sltoo-quen, or the Paradise of Ten Thousand Trees, for several hours, and yet was never weary of wandering, for certainly so rich, so beautiful, so sublime a prospect my eyes had never beheld. But if any place can be said in any respect to have similar features to the western part of Van-shoo-quen, which I have seen this day, it is at Lowther Hall, in Westmoreland, which, when I knew it many years ago, from the extent of prospect, the grand surrounding objects, the noble situation, the diversity of surface, and command of water, I thought might be rendered by a man of taste the finest scene in the British dominions.”

The family of Lord Lonsdale descends more immediately from Sir Richard Lowther, living in the reign of Elizabeth, but its more remote ancestry is lost in the mists of antiquity, its “local habitation” being unquestionably that above indicated.