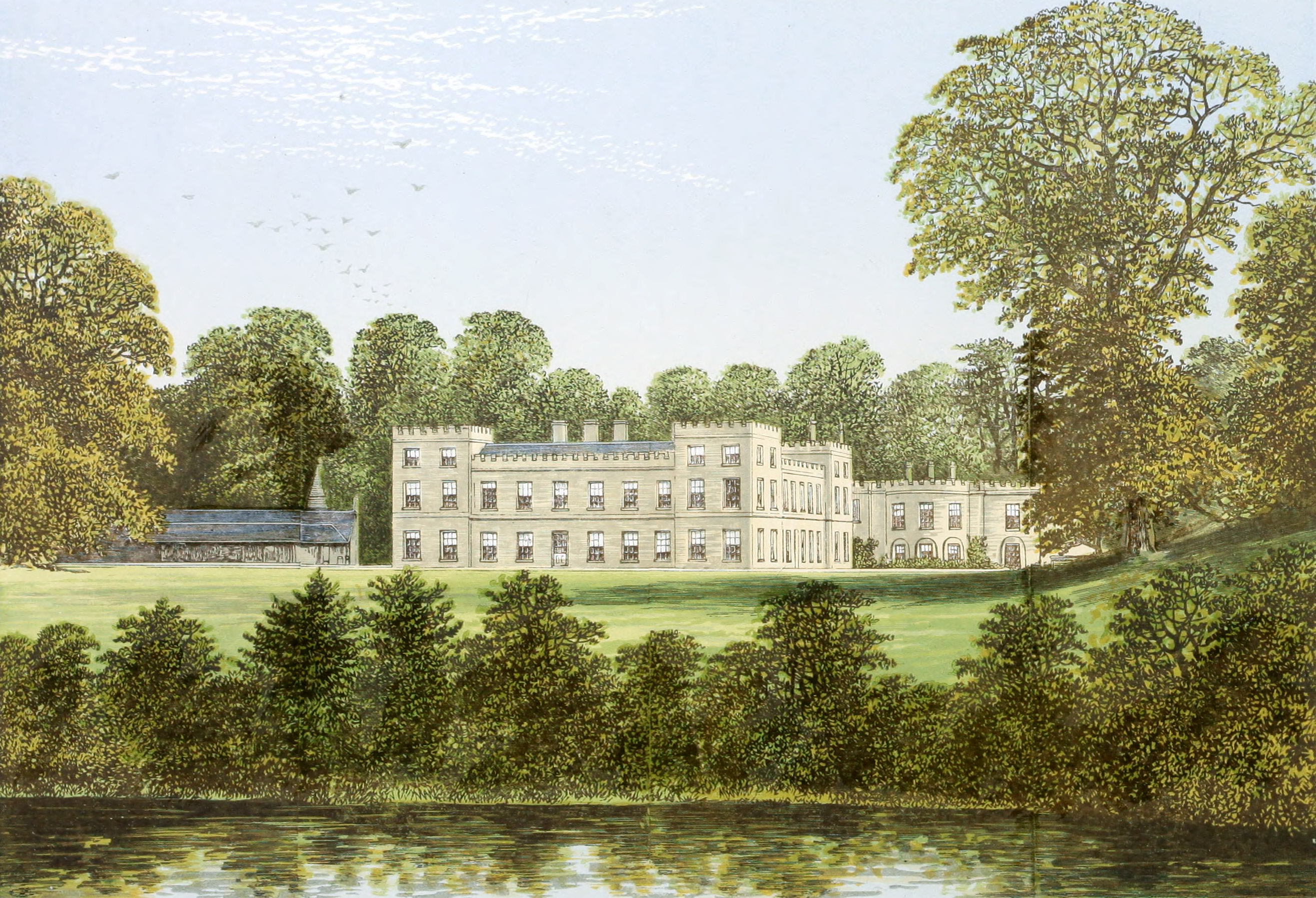 The name of this seat, Ugbrooke, or Wogbrooke, is derived from that of the river by which it stands, the word wog in the Saxon language meaning, according to Chappie, winding, crooked, or bending.

The house, which stands on the side of an eminence, is about one mile from Chudleigh, and being in the beautiful county of Devonshire, it may well be supposed that within the circumference of seven miles of the estate there is an almost endless succession of enchanting views.—

“Collected here,
As in one point, all Nature’s charms appear;
Hills strive with woods, with waters woods agree,
Of Devon’s charms the grand epitome.
To those who judge by studied rules of art,
And make the whole subservient to a part,
Whose taste the neat parterre and formal line,
Or studded clumps and circling path confine,
Misshapen, rude, and rough, the draught may seem;
The great sublime was never meant for them.
O’er opening vales see hills on hills arise,
New objects vary still, and still surprise.
Through all those wilds our eyes unbounded roam
O’er half the sphere, and still confess their home;
For still no bounds their separate parts control,
Rocks, hills, and plains form one united whole.
See Haldown here his russet length extends,
There Dart’s high Torr in cloud-capp’d pomp ascends;
Around the horizon, broken and uneven,
Rocks frown o’er rocks, and prop the bending heaven.
Scoop’d out by Nature’s hand then back they slide
In wild disorder, and the chain divide;
With bulky pride then swelling out again,
They crowd along, and break upon the plain.
The lovely plain, in pleasing contrast, now
More brightly smiles, and softens all below.
Here the majestic King, with conscious pride,
Pours from his urn the tributary tide;
Now, hid in shade, he works his silent flood
Thro’ the dark mazes of the pendant wood
Now murmurs on and bursting into day,
O’er chiding pebbles rolls himself away;
Then turns and winds his current back again,
As loth to leave the sweet alluring plain,
Till, sweeping through the fields with wider sway,
He rides along and rushes to the sea.
Here rich Pomona, too, with apples crown’d,
Scatters her fruits and sparkling nectar round.
See, cheerful industry walks o’er the plain,
With all the rural graces in her train;
On verdant slopes while Pan his flock surveys,
And golden Ceres all her stores displays.”

Thus also the plain prose of the county historian Polwhele,—“The scenery of Ugbrook is very different from that of Mamhead and Powderham. The romantic wilderness of the former may be contrasted with the comparatively tame beauties of the latter. Ugbrook hath all within itself. Powderham and Marnhead, particularly the latter, derive half their charms from distant prospect. Here the woods sweep wildly round, pursuing the course of the valley. Here the park presents to us the finest features of extensive lawn, smooth and verdant, noble eminences, and magnificent masses of shadow. Here the gigantic oaks, and other forest trees, some throwing their extravagant arms across the stream, others wreathing high their old fantastic roots, and the various windings of the brook, at one time almost hid within its rugged, banks, at another whitening as it struggles amidst fragments of rocks, at another gliding over its marble bed, are points which cannot but attract admiration.”

The entrance to the mansion is by a spacious hall, which opens into a dining-room thirty-six feet long by twenty-four, and on its walls are some valuable portraits by Sir Peter Lely, and a splendid painting by Titian. The library is also a room of large proportions, and is well filled with a valuable collection of ancient and modern books, and in the other rooms are a variety of articles of rarity and value.

Tradition states that this was a favourite retreat of the poet Dryden, and one of the pathways, still called Dryden’s walk, commemorates the fact.

Lord Clifford derives his descent from

Richard Fitz Ponz, living in the reign of Henry the Second, whose son,

Walter Fitz Ponz, married Margaret, daughter and heiress of Ralph de Todeni, with whom he acquired Clifford Castle, in Herefordshire, and hence assumed the name of Clifford.