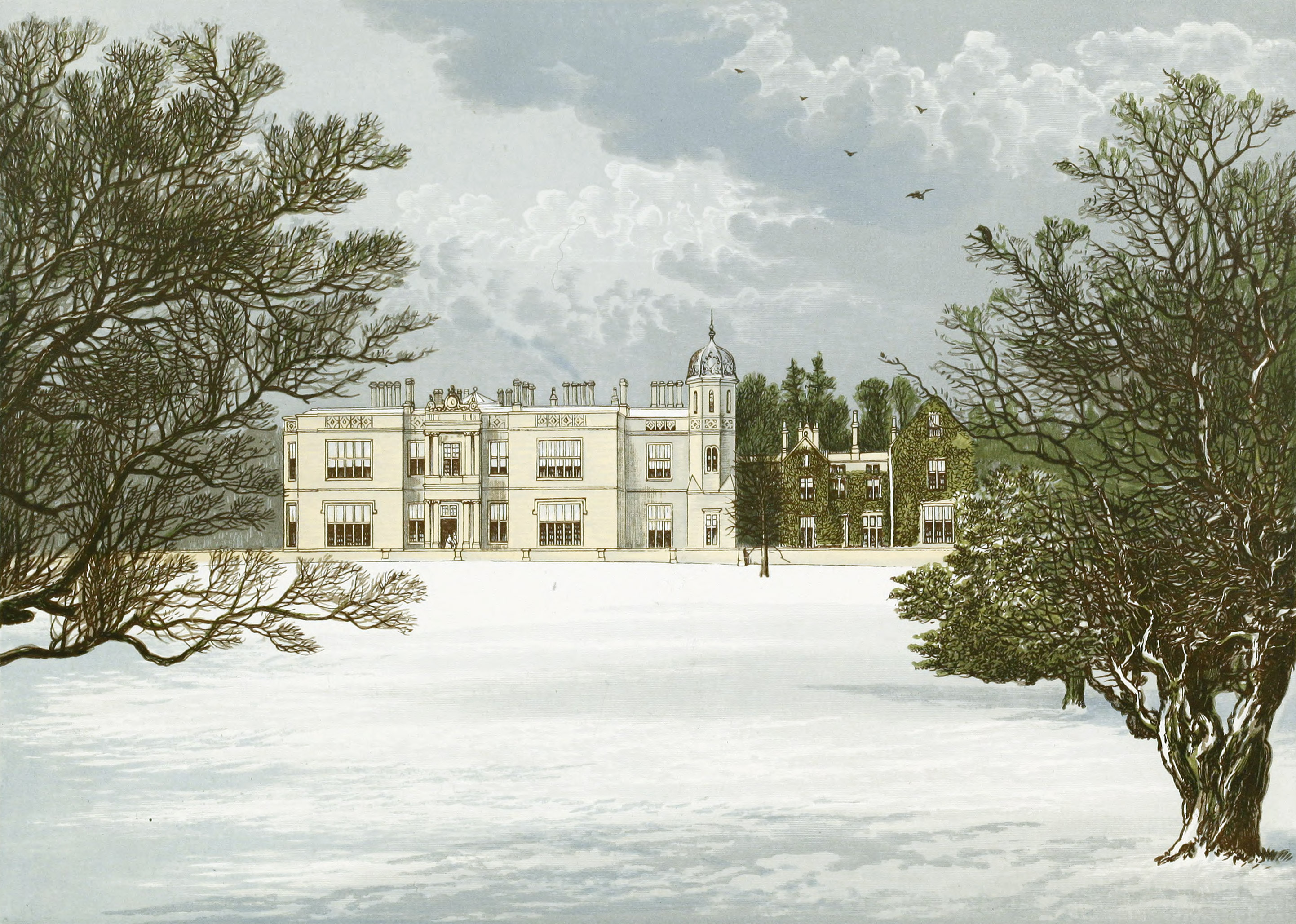 Eshton Hall, formerly the residence of the “De Esshetons” (Ranulf de Bston was living in 1186, and John de Eston contested the right to the Earldom and estates of Albemarle with King Edward the First,) passed into the Clifford property, and was sold by George, Earl of Cumberland, in 1597, to Robert Bindloss, Esq., of Borick, and in 1646 the hall, estate, and manor were sold by Sir Robert Bindloss, Bart., to Mathew Wilson, of Kendal, a merchant clothier, and Blackwell Hall, factor, of Coleman Street, in the City of London, ancestor of the present owner.

The house, rebuilt by his father in 1825–6, from designs by the late George Webster, of Kendal, architect, is of white freestone, on an eminence that commands a beautiful home view, is entered by a portal consisting of massive piers, faced with Doric on the basement, and surmounted by Ionic pilasters, finishing at the summit by a pierced battlement and rich scroll-work. The entrance is thirty feet by twenty feet, opening by folding doors on a handsome saloon; staircase of carved oak, thirty feet square, lighted by a dome; on the right the dining-room, thirty-six feet by twenty-four feet; beyond this the morning-room, twenty feet square; on the left the library, forty feet by twenty-four feet, with a bay-window, and communicating by folding doors with the drawing-room, thirty-four feet by twenty-four feet, with a bay-window: all these rooms are sixteen feet high. The billiard-room is behind the staircase, thirty feet by twenty feet, opening into the staircase and into the drawing-room, and by the bay-window into the flower garden. The library and drawing-room fitted up as a library, contain ten thousand volumes, especially rich in topography, collected by the late Miss Richardson-Currer, Sir Mathew Wilson’s half-sister. There are portfolios of engravings, articles of vertu in marble, bronze, nola vases, cabinets, and china; a good collection. of pictures by old masters, and family portraits.

The family of Wilson descends from

Robert Wilson, Esq., of Brigsteare, Haversham, Westmoreland, and Alice his wife. Their son,

Mathew Wilson, Esq., became possessed of Eshton Hall by purchase, as above stated. He died in London in 1656, and was succeeded by

John Wilson, Esq., of Eshton Hall, wlio, by his wife Dorothy, was father of, with other younger children,

Mathew Wilson, Esq., of Eshton Hall, baptized October 14th., 1706, who married Margaret, daughter of Henry Wiglesworth, Esq., of Slaidburn, and had, with other issue, his heir,

Sir Mathew Wilson, J.P. and D.L., M.P. for the Northern Division of the West Riding of Yorkshire, born August 29th., 1802, created a Baronet in 1874. He married, June 15th., 1826, Sophia Louisa Emerson Amcotts, only daughter and co-heiress of Sir Wharton Emerson Amcotts, Bart., of Kettlethorpe Park, Lincolnshire, by his second wife, Amelia Theresa Campbell, and has a son,