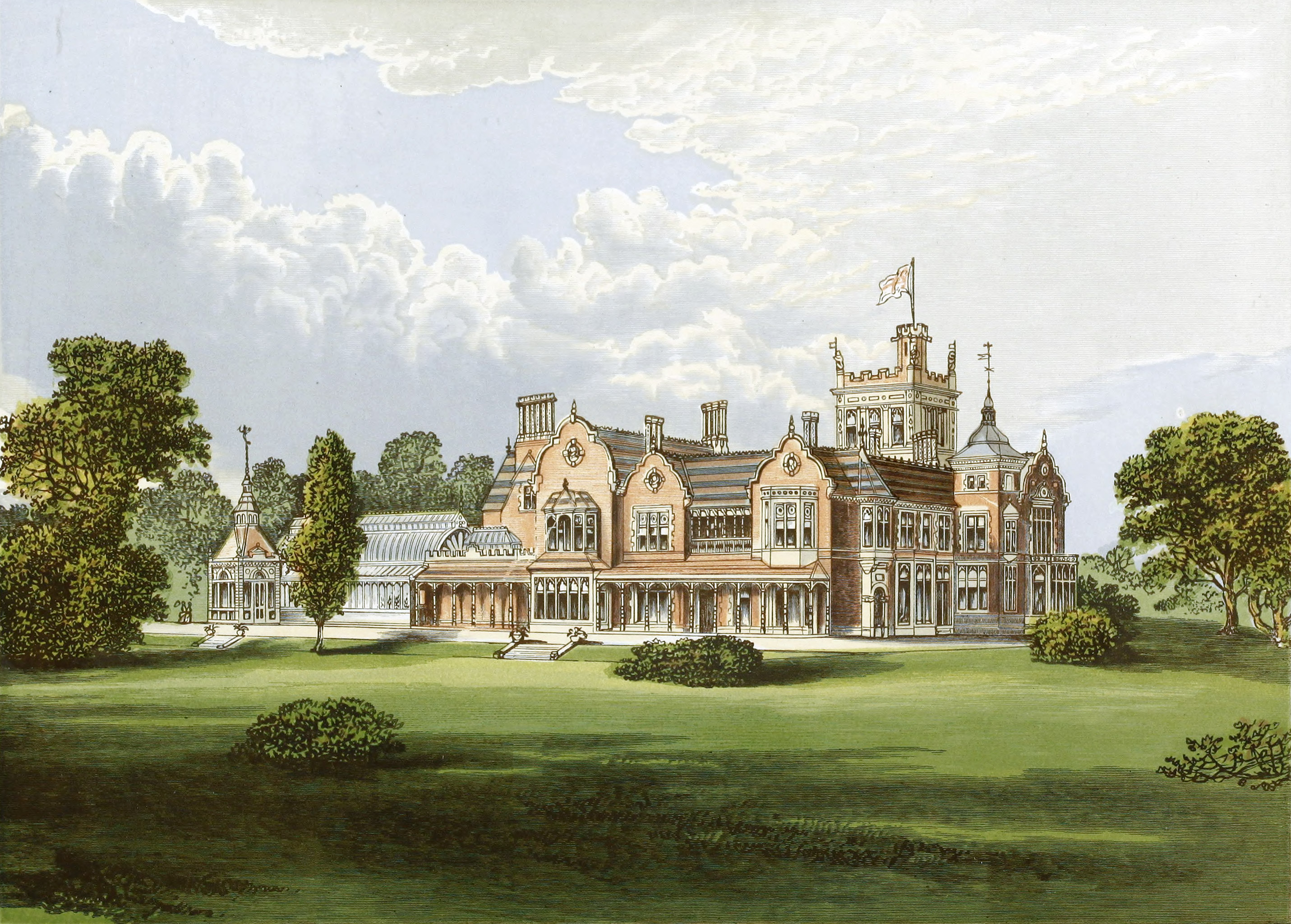 This beautiful edifice, built on the site of the Fitzroy Farm and Dufferin Lodge, (the late residence of Lord Dufferin,) has been recently erected by its present proprietor, Mr. Edward Brooke. The house is of a highly ornamented character throughout, and the interior especially is richly decorated with carving. The ante- hall is laid with black and white marble, and the chimney-pieces here and in other rooms are richly carved from designs by the architects. “The ceilings of the dining-rooms, the halls, the morning room, and library are of panelled wainscot, moulded and carved, with an elaborately-carved chimney-piece in the dining-room, also of wainscot, worked up to the ceiling. On either side of the dining-room chimney-piece are windows looking into a fernery, with fountains. The upper portion of the windows above the transome is fitted with stained glass of a geometrical pattern. The staircase windows are filled with stained glass; the large one with the armorial bearings of the Brooke family for eighteen generations; the side lights, with subjects from Tennyson’s poems.” In the windows of the billiard-room are representations of various outdoor sports and pastimes, as hunting, cricket, archery, etc., also in stained glass.

“The morning room is lined with old Cordova leather, brought from Antwerp, which was put up in a mansion there when Antwerp was under Spanish rule: it is in a fine state of preservation. The ceiling of this room is decorated to agree with the leather, the upper portions of the windows being fitted with designs of the seasons; the frieze of the cornice having heads modelled from Scriptural subjects.”

Highgate, in such near proximity to the city of London, is rich in historical associations, and especially has it been, for many generations, the retreat of literary men. Coleridge lived for some time here, at the latter part of his life, “looking down,” as Carlyle says, “on London and its smoke-tumult, like a sage escaped from the inanity of life’s battle, attracting towards him the thoughts of innumerable brave souls still engaged there,—heavy laden, high aspiring, and surely much-suffering men.” Mac Dowell the sculptor. Dr. Southwood Smith, and Mr. David Williams, the founder of the Literary Fund, were also residents of this place. Andrew Marvell, the patriot representative of Hull, the friend and benefactor of Milton, and the first to discover and make known the genius of “Paradise Lost,” had a house at Highgate. These are but a few of the literati of past generations who have honoured this suburban village with their presence; while to-day it is the adopted residence of many of their successors in the world of science and letters.

Here, about the year 1630, Cromwell built for himself “Cromwell House,” where, however, it is thought he paid but occasional visits. Prickett, the historian of Highgate, says that this residence of the Protector’s “was evidently built and inter- nally ornamented in accordance with the taste of its military occupant. The staircase, which is of handsome proportions, is richly decorated with oaken carved figures, supposed to be of persons in the general’s army, in their costume; and the balus- trade filled in with devices emblematical of warfare. On the ceiling of the drawing- room are the arms of General Ireton: this and the other ceilings of the principal apartments are enriched in conformity with the fashion of those days. The proportions of the noble rooms, as well as the brickwork in front, well deserve the notice and study of the antiquary and the architect.”

The chapel of Highgate, which occupied the site of a hermit’s cell, was granted by Bishop Grindal, afterwards Archbishop of Canterbury, in 1565, to a new gi-ammar school, erected and endowed the year before by Sir Roger Cholmeley, late Lord Chief Justice. This was pulled down many years ago, and the church built in another part of the village. Among the tombs was that of Coleridge, the poet and philosopher. The present church was built in 1832, at a cost of £10,000, in the parish of St. Pancras; but shortly afterwards Highgate was made a district of itself.