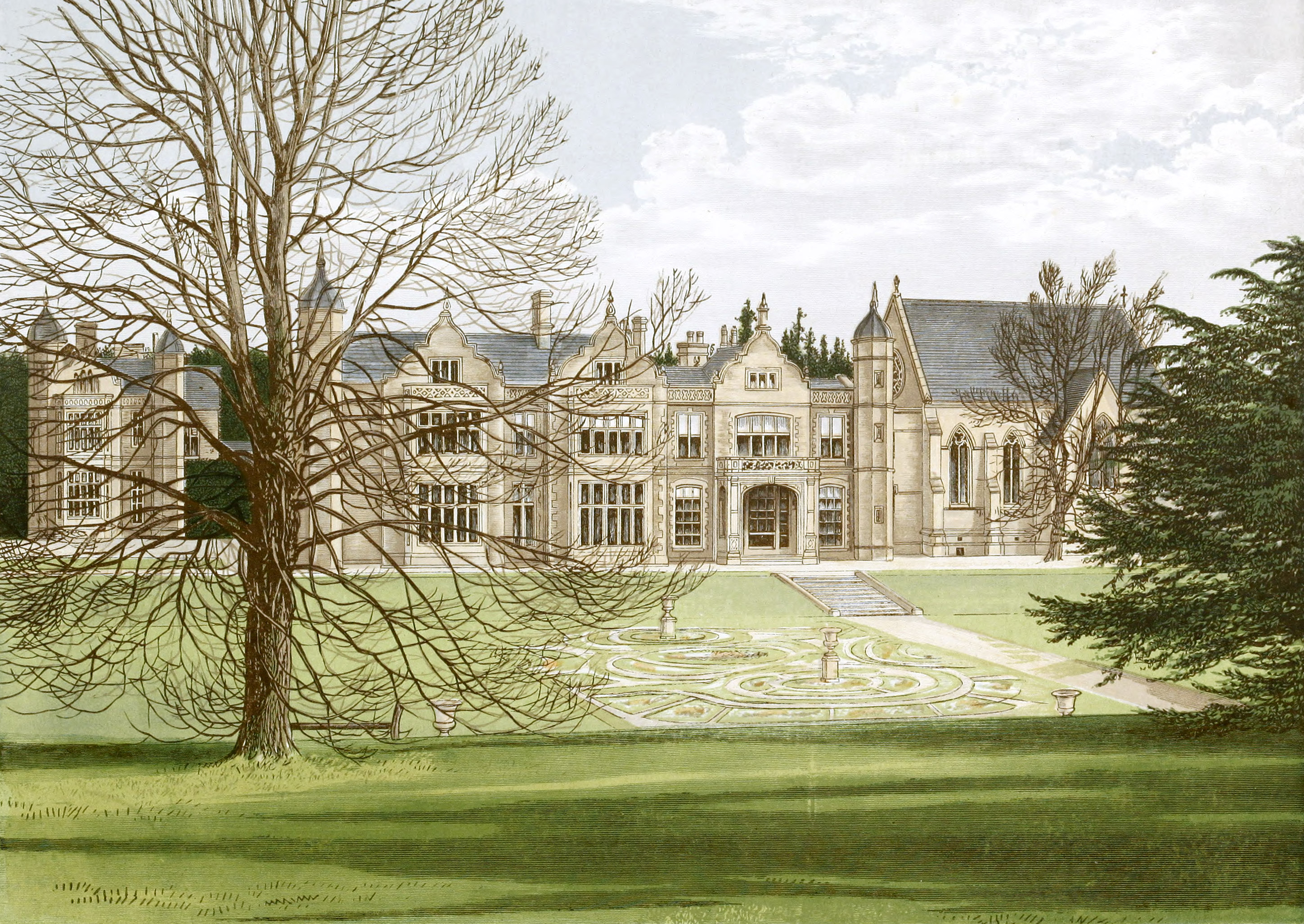 Near Oakham, Rutlandshire.—Earl of Gainsborough.

Exton House is situated upon the edge of a noble park containing one thousand five hundred acres of land, three hundred of wood, and eighty of water. The park is well stocked with deer. In the centre of it is Tunnelly Wood, and a ride through it is called the Queen of Bohemia’s Ride.

The new hall, which is about one hundred and fifty yards from the site of the old family residence, the south-east wing of which was destroyed by fire in 1810, is a large Elizabethan mansion, built at various periods since the year 1811. It was commenced first of all by Sir Gerard Noel, Bart., as a sort of temporary residence until the ravages of the fire in 1810 could be made good again; but as time went on, building after building was added to the new edifice, and finally, in 1851-2, the then Earl considerably enlarged it at a cost of several thousand pounds. The mansion is of freestone, and contains a main building in three compartments, the lower part of which consists of a fine drawing-room, ante drawing-room, dining-room flanked at each end by an octagonal turret surmounted with a pinnacle, and there is a west wing placed a little backward with a turret similar to those in front. In this part of the building is a billiard room, and the access to this part of the house is by a vestibule, ornamented on both sides with good family pictures. The hall and grand staircase are extremely handsome. There is a well stocked library, which occupies two rooms. The upper part of the house contains about forty bedrooms, and the domestic ojfices form a square in the rear of the building.

The view from the south front of the house is charming, the ruins of the picturesque old hall, with its grand gables, beautiful chimneys, and ivy-clad walls, and the magnificent village church, are the principal objects at first sight, and the scene is much heightened by the water and the noble trees adorning its banks, the prettily laid out gardens and terraces, all adding to the charm of a scene which cannot fail to delight the eye of all lovers of the picturesque.

The chapel at the east end of the house is cruciform in plan, with an apse, an aisle, and sacristy on the north side, and a north porch to the nave: it is well lighted by windows in the plinth of the superstructure. The style of architecture is that which prevailed in England at the latter end of the thirteenth century, and it combines and contrasts well with that of the mansion.

At the time of the Norman Conquest, Exton belonged to the Countess Judith, who married Waltheof, Earl of Northumberland. Their heiress, Maude, married David, King of Scotland. From him Bxton passed to the Bruces: afterwards to the Greens, Culpeppers, and Harringtons, who held it for five generations.

Sir Baptist Hicks, Knight, bought it in the reign of James the First, and in 1628 he passed it to his son. Viscount Campden. Dying without issue, the estates and titles devolved to Edward Noel, first Baron Noel of Ridlington, whose grandson was created Earl of Gainsborough in 1682. On the death of Henry, sixth Earl of Gainsborough, without issue, 1768, his titles became extinct, and he left his property to his nephew, Gerard Noel Edwards, who in 1798 became Sir Gerard Noel, Baronet. The Honourable Charles Noel Noel succeeded to Exton after the death of his father. Sir G. Noel, and was Baron Barham in right of his mother, and was created Earl of Gainsborough and Viscount Campden in the year 1841. His son. Sir Charles George Noel, succeeded to the estates upon the death of his father, June 10th., 1866.

The ancestor of the Earls of Gainsborough was — Noel, who came, with his wife Celestria, into England with William the Conqueror in 1066. His son Robert had, in the reign of Henry the First, a grant of the greater part of Gainsborough, in the county of Lincoln. William the Conqueror had previously granted to his father, for his services, the manors of Ellenhall, Wiverstone, Podmore, etc., in Staffordshire.