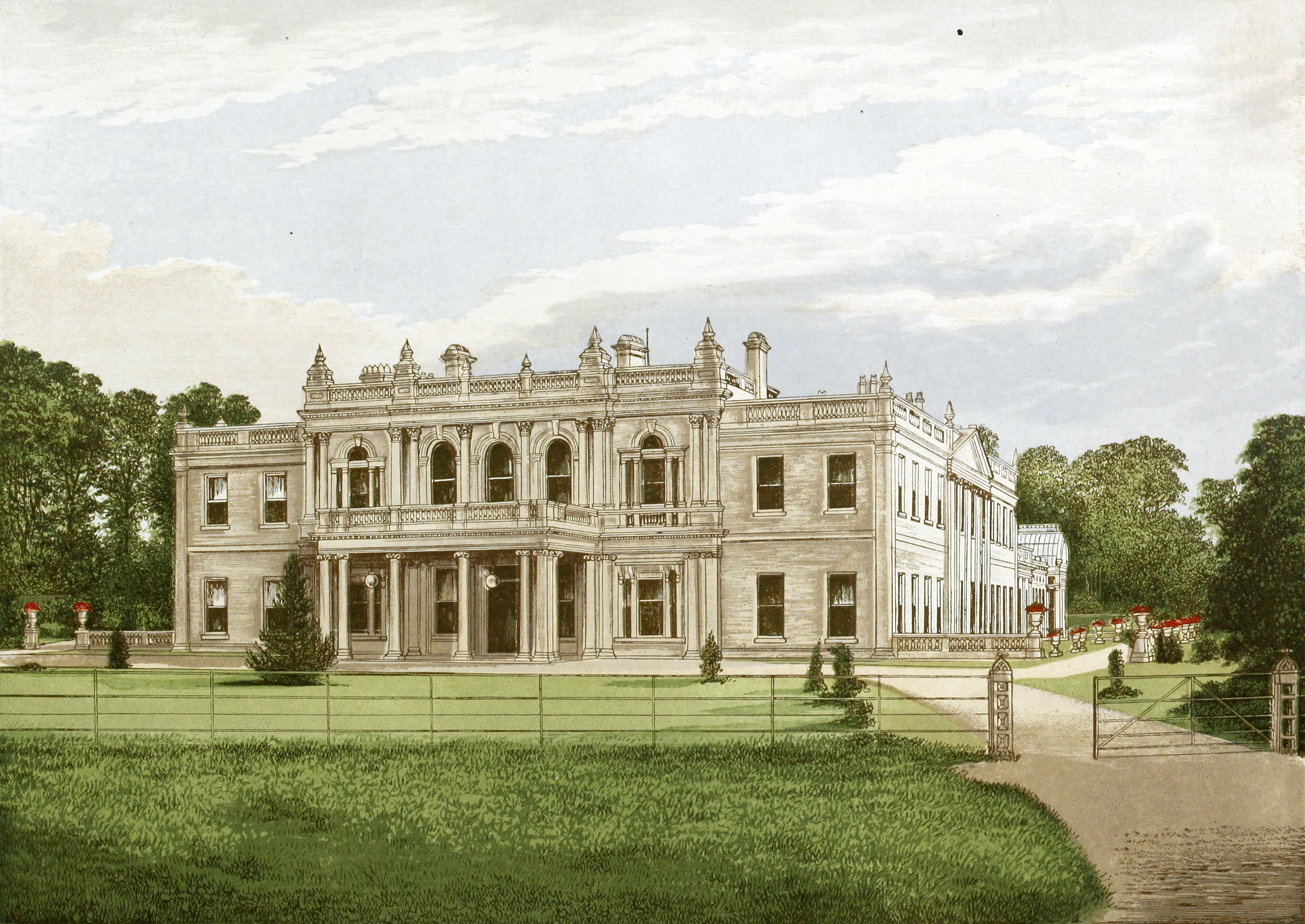 Rolleston Hall is situated about a mile from Tutbury Castle.

The site appears to have been occupied as a residence ever since the early part of the reign of King Henry the Third, but the present mansion is almost entirely new, the principal part of the former structure having been destroyed by fire in October, 1871.

The Civil War has left its stamp upon this place, for, on the 25th. of May, 1645, King Charles the First came with his army, under the command of Lord Lough- borough, to Tutbury Castle, and some of the soldiers were quartered at Rolleston, under a certain Captain Symonds, who seems to have amused himself by taking notes of the coats of arms in the church, which memoranda are still preserved amongst the Harleian Manuscripts in the British Museum.

The estate formerly belonged to a family of the name of Rolleston, until it was bought from them by Sir Edward Mosley, Knight, Attorney-General for the Duchy of Lancaster, about the latter end of the seventeenth century, and upon the failure of issue of Sir Edward Mosley, Baronet, (representative of the senior line of the present family,) who married Catherine, daughter of William, Lord Grey of Wark, the title became extinct; and his widow marrying Charles, son and heir of Dudley, Lord North, he thereby became possessed of the Rolleston estate and manor, which she had in jointure, and was by special writ summoned to Parliament by the title of Lord North and Grey of Rolleston, in the twenty-fifth year of King Charles the Second.

The descent of the family is as follows:—

Edward Mosley, Esq., of Houghead, in the county of Lancaster, married Margaret, daughter of Alexander Elcock, Esq., of Hilgate, Cheshire, and had three sons, of whom the youngest,

Anthony Mosley, Esq., of Ancoats, Lancashire, married Anne, daughter and co-heiress of Ralph Lowe, Esq., of Mile End, in Cheshire, and had a large family, of whom the eldest son,

Nicholas Mosley, Esq., of Ancoats, married Jane, daughter of John Lever, Esq., of Alkrington, in Lancashire, and was succeeded by his son,

Oswald Mosley, Esq., of Ancoats, and Rolleston, in Staffordshire, who married Mary, daughter of Joseph Yates, Esq., of Stanley House, near Blackburn, and dying in advanced age in 1726, left issue, of whom

Oswald Mosley, Esq., of Rolleston Hall and Ancoats, was Sheriff of Staffordshire in 1715, and was created a Baronet by George the First, June 18th,, 1720. He married Elizabeth, daughter of John Thornhaugh, Esq., of Fenton, Nottinghamshire, and had issue two sons, of whom the elder.

The Rev. Sir John Mosley, who also died unmarried, when the estates devolved on his cousin,

John Parker Mosley, who then became of Rolleston Hall, and was created a Baronet, March 24th., 1781. He married, April 7th., 1760, Elizabeth, daughter of James Bayley, Esq., of Withington, Lancashire, and had

Oswald Mosley, Esq., of Bolesworth Castle, Cheshire, born March 17th., 1761, married, in 1784, Elizabeth, daughter of the Rev. Thomas Tonman, Rector of Little Budworth, in Cheshire, and died in his father’s lifetime, July 27th., 1789, leaving, with several other children, an eldest son, who succeeded as second Baronet under the new creation, and so became

Sir Oswald Mosley, Baronet, of Rolleston Hall and Ancoats, born March 27th., 1785, married, January 31st., 1804, to Sophia Anne, second daughter of Sir Edward Every, Baronet, of Egginton, by whom he had three sons, of whom the second.

Sir Tonman Mosley, Baronet, born July 19th., 1813, an ofl&cer in the Enniskillen Dragoons, married February 4th., 1847, Catherine, daughter of the Rev. John Wood, of Swanwick, Derbyshire, and had three sons, the eldest being