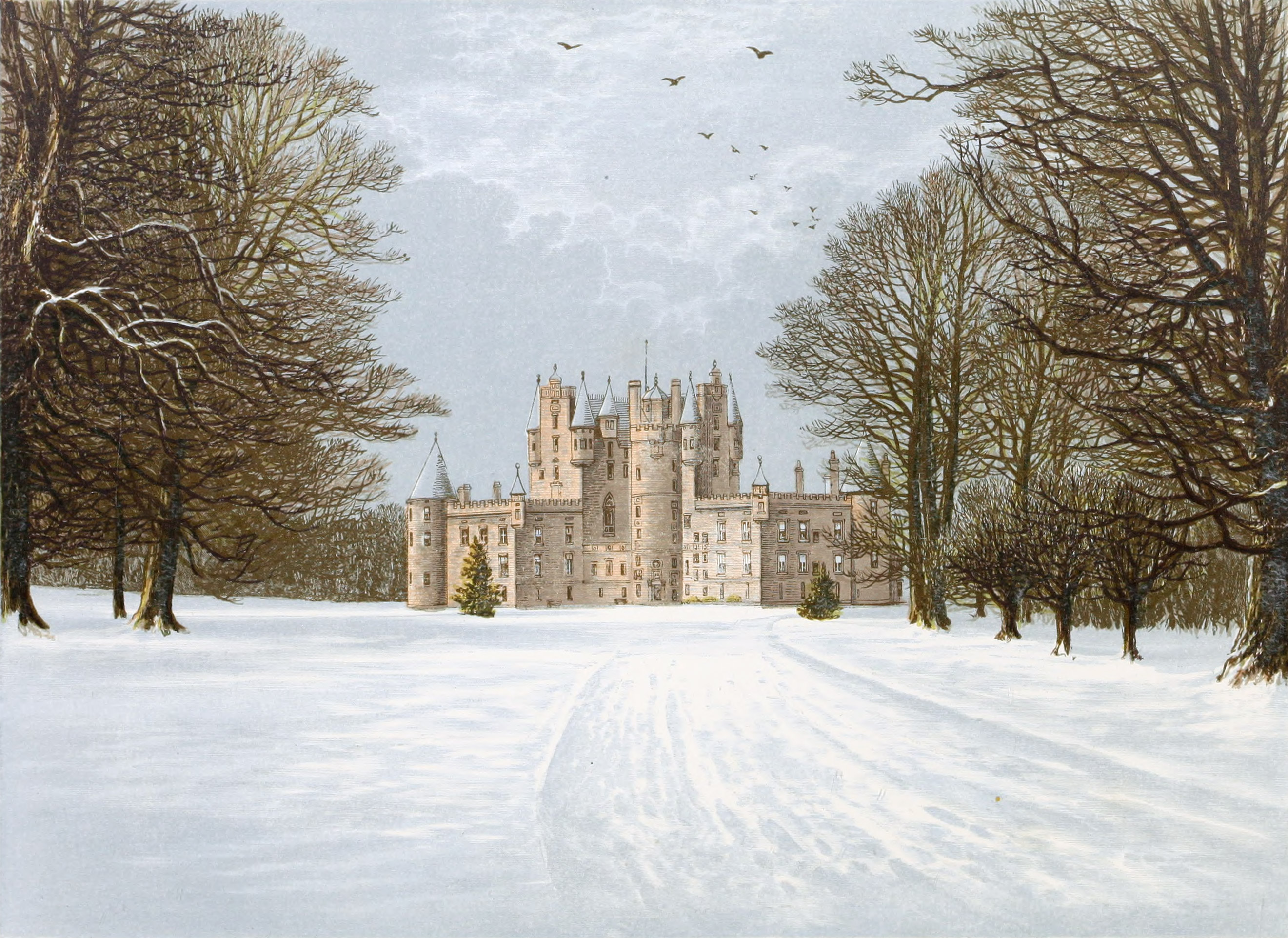 Near Forfar, Forfarshire.—Earl of Strathmore.

This ancient castle is one of the most venerable edifices in Scotland.

The central tower is ascended by a staircase of one hundred and forty-three steps; on the left of it is a vaulted stone hall, seventy feet in length and twenty-five in breadth. At the sides of the windows are curious little rooms, cut out of the thick walls. Adjoining the stone hall is the library, and beyond it a room forty-five feet long, and two stories high, intended for a drawing-room. Over the stone hall is the great hall of the castle, the arched ceiling thirty feet high, and ornamented with heraldic blazonry. The date is 1621. By the side of the hall is the Chapel, fitted up with dark oak, on which are hung curious paintings of the Apostles and scenes from Holy Scripture. The great drawing-room is sixty feet in length by thirty wide and twenty-four feet high. Many of the bed-rooms are fitted up with antique beds, with velvet hangings, and in some of thein the massive chairs are carved and gilded. The great kitchen is sixty feet by thirty, and thirty feet high.

Great alterations were made in this grand old building by Patrick, first Earl of Kinghorne, in 1606.

The Pretender slept here in 1715, and had eighty beds made up for himself and his followers.

John de Lyon, feudal Baron of Porteviot, secretary to Robert II., had, from the king, a grant of the lordship of Glamis in 1371. His son,

Sir John de Lyon, Great Chamberlain of Scotland, married Lady Jane Stewart, second daughter of King Robert II., with whom he acquired the Barony of King- horne. He was slain by Sir James Lindsay in 1388, and their son,

Sir John Lyon, of Glamis, married Lady Elizabeth Graham, second daughter of Patrick, Earl of Strathern, and dying in 1435, was succeeded by his eldest son,

Patkick Lyon, of Glamis, P.C., created a Peer of Parliament, as Lord Glamis, in 1445. He married Isabel, daughter of Alexander Ogilvy, of Auchterhouse, and was followed in succession by the two elder of his three sons, first,

Alexander Lyon, second Lord Glamis, at whose decease without children in 1485, his next brother succeeded, namely,

John Lyon, fourth Lord Glamis, married Elizabeth, daughter of Andrew, Lord Gray, and was succeeded in 1500 by his eldest son. In direct descent after him,

Patrick Lyon, ninth Lord Glamis, Captain of the Guard and of the P.C. to King- James VI., was created Earl of Kinghornk, July 10th., 1606.

Patrick Lyon, third Earl of Kinghorne, P.C, obtained a new charter, making the future titles Earl of Strathmore and Kinghorne, Viscount Lyon, Baron Glamis, Tannadyce, Sidlaw, and Strathictie. He married Helen, daughter of John, Earl of Middleton, and was succeeded by his son,

John Lyon, fourth Earl of Strathmore and Kinghorne. He married Lady Elizabeth Stanhope, daughter of Philip, second Earl of Chesterfield, and dying in 1712, his successor was

John Lyon, fifth Earl of Strathmore and Kinghorne, who was slain in rebellion in 1715, at the battle of Sheriffmuir.

Thomas Lyon, eighth Earl of Strathmore and Kinghorne, married in July, 1 736, Jean, daughter and heiress of James Nicholson, Esq., of West Rainton, Durham, and had, with other issue—he died in 1753,—

John Lyon, ninth Earl of Strathmore and Kinghorne, married, in 1767, to Mary Eleanor, only daughter and heiress of George Bowes, Esq., of Streatlam Castle and Gibside, Durham, and assumed in consequence the additional name of Bowes. He died in 1776. His son and successor,

John Bowes Lyon, tenth Earl of Strathmore and Kinghorne, born April 11th., 1769, was raised to the Peerage of the United Kingdom as Baron Bowes of Streatlam Castle, July 18th., 1815. He married, July 2nd., 1820, Mary, daughter of J. Milner, Esq., of Staindrop, Durham, but died the following day. At his death the English Barony expired, and the Scotch Peerage devolved on his brother,

Claude Bowes Lyon, thirteenth Earl of Strathmore and Kinghorne, born July 21st., 1824, an officer in the Second Life Guards, married, September 28th., 1853, Frances Dora, daughter of Oswald Smith, Esq., of Blendon Hall, Kent, and had a large family, of whom the eldest son,