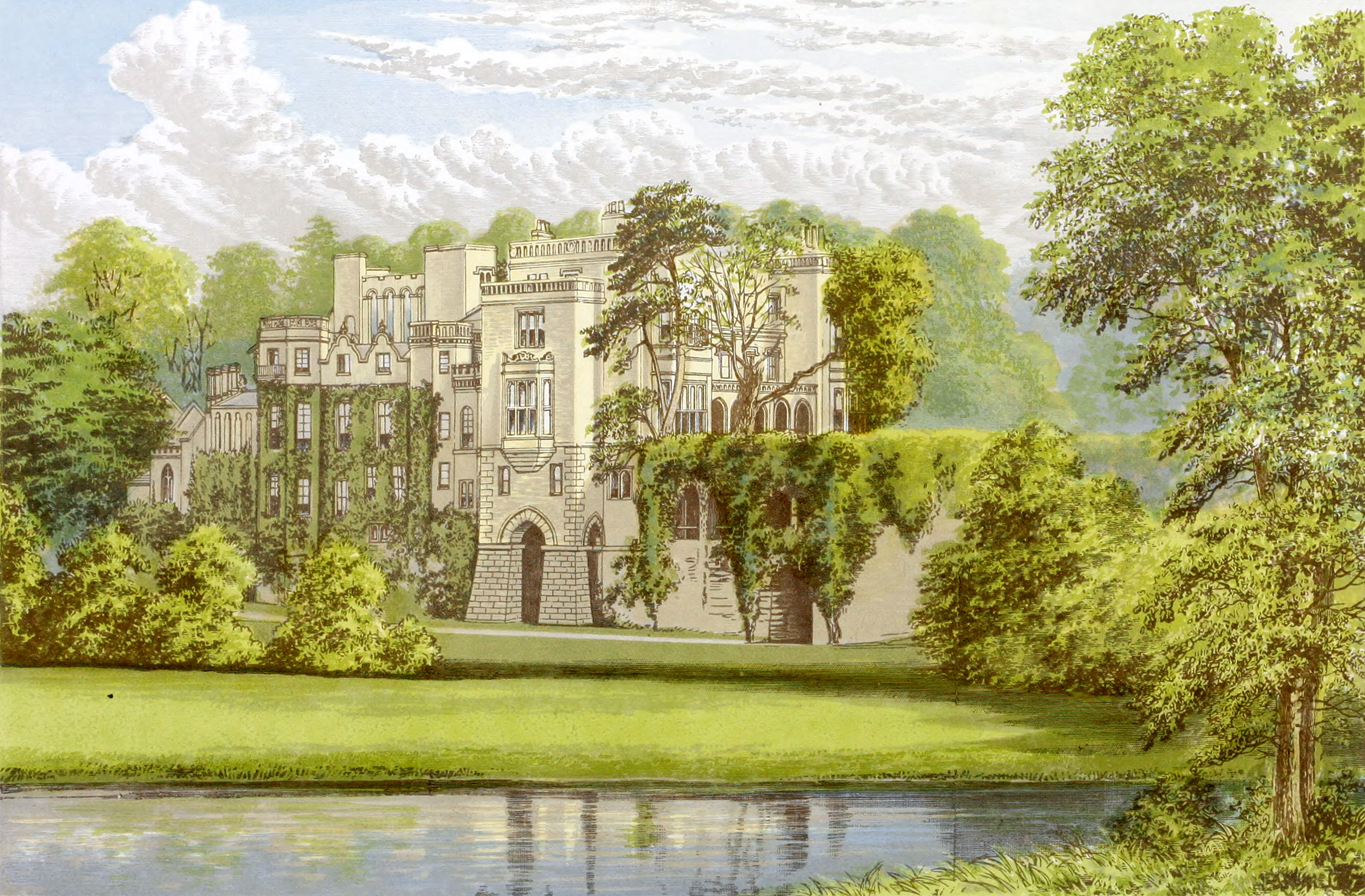 This seat derives its double name from a person and a place, the former that of the redoubtable and famous “Guy, Earl of Warwick,” the latter a high cliff which here bounds the western side of the classic Avon.

The story of Guy is thus told by my friend Sir Bernard Burke:—“Guy, who, like most of his brethren in the trade of knight-errantry, had much to answer for, bethinks himself at last that it is time to repent and amend, for which purpose, according to the most approved fashion of his day, he sets out upon a tedious pilgrimage. On his return to Britain he finds the country being harassed by Danish invaders, so that there was scarce a town or castle that they had not burnt or destroyed almost as far as Winchester. In the midst of their success these ferocious invaders proposed to King Athelstan three things,—either that he should resign his crown to the Danish generals; or should hold the realm of them; or that the dispute should be ended in a single combat by a champion of either side; when, if the Dane was beaten, his countrymen would free England of their presence; but if he prevailed, then the country without more ado should be given up in sovereignty to the Danes. Athelstan accepted the last of these propositions, but not one of his court felt inclined to match himself with the formidable giant Colbrand, the elected champion of the Danes. At this crisis Guy appears in his palmer’s weeds, and is, with some difficulty, persuaded by the King to undertake the combat. What it was that induced Athelstan to place his fate and that of his kingdom in that of a wayworn, unknown pilgrim, is not explained by the chronicler, but the romancer unties the knot by the usual expedient in such cases. Athelstan had a vision instructing him to trust his defence to the first pilgrim he should meet at the entrance of his palace. The day of battle arrives, when the two com- batants meet in the valley of Chilticumbe. Guy appears in the customary armour of a knight, but his adversary, the giant Colbrand, comes to the field with weapons enough to supply a whole host; he was ‘so weightily harnessed that his horse could scarce carry him, and before him a cart loaded with Danish axes, great clubs with knobs of iron, square bars of steel, lances, and iron hooks to pull his adversary to him.’ At this sight, notwithstanding his valour, Guy began to quake, or, as the romancer emphatically exclaims, ‘never he was’n so sore afeard sith then he was born.”

It would seem, however, as in the case of the renowned French marshal, that it was his body and not his soul which was afraid, for he fought his battle right gallantly under every disadvantage. His horse is killed, his helmet cleft in two, and his sword “broken, but he makes a prayer to the Virgin, and snatching up an axe cuts off the giant’s arm, who, for all that, ‘held out the combat till the evening of that day,’ when he fainted from loss of blood, and Guy incontinently cut off his head.”

At the dissolution of the monasteries Guy’s Cliffe was bestowed by Henry the Eighth on Andrew Flammock, of Flammock.

In later times it was possessed by a family named Edwards, and next passed to

Samuel Greathead, Esq., who built a new residence, and his son greatly enlarged and improved the place.

The Hon. Charles Bertie Percy, who thus became the owner of Guy’s Cliffe.

Dugdale thus describes the scenery around. “A place this is of so great delight in respect of the river gliding below the rock, the dry and wholesome situation, and the fair groves of lofty elms overshadowing it, that to one who desireth a retired life, either for his devotions or study, the like is not to be found.” Leland also thus,—“It is a house of pleasure, place meet for the Muses; there is silence, a pretty wood, antra in vivo saxo, the river rouling over the stones with a pretty noyse, “nemusculum ibidem opacum, fontes liquidi et gemmei, prata florida, antra muscosa, rivi levis et per saxa discursus, necnon solitudo et quies Musis amicissima,” that is, “a thick grove there, liquid and sparkling fountains, flowery meads, mossy caverns, the gentle flow of a river over rocks, and also solitude and quiet most friendly to the Muses.”

Within the house is a splendid collection of paintings, many of them from the easel of a young artist, Mr. Greathead, a son of the then family. The talents of the youthful painter were of such high promise, that when he visited France during the short peace, instead of sharing the fate of the other detenus, he was allowed by the special grace of Napoleon to retire to Italy. There, however, he unfortunately died of a fever,

at the early age of twenty-three. In addition to his works, many paintings by the most eminent masters are to be seen here, such as Cuyp, Canaletti, Spagnoletto, Holbein, and others of no less celebrity.

The family of Percy, Earls of Beverley and Dukes of Northumberland, of the former of which is the present owner of Guy’s Cliffe, descends from Sir Hugh Smithson, who married Lady Elizabeth Seymour, the heiress of the Percies, and was created Duke of Northumberland in 1776.

The House of Percy had derived from William de Percy, one of the Norman chieftains who accompanied William the Conqueror in 1066, and deduced his name from the village of Percy, near Yilledieu.