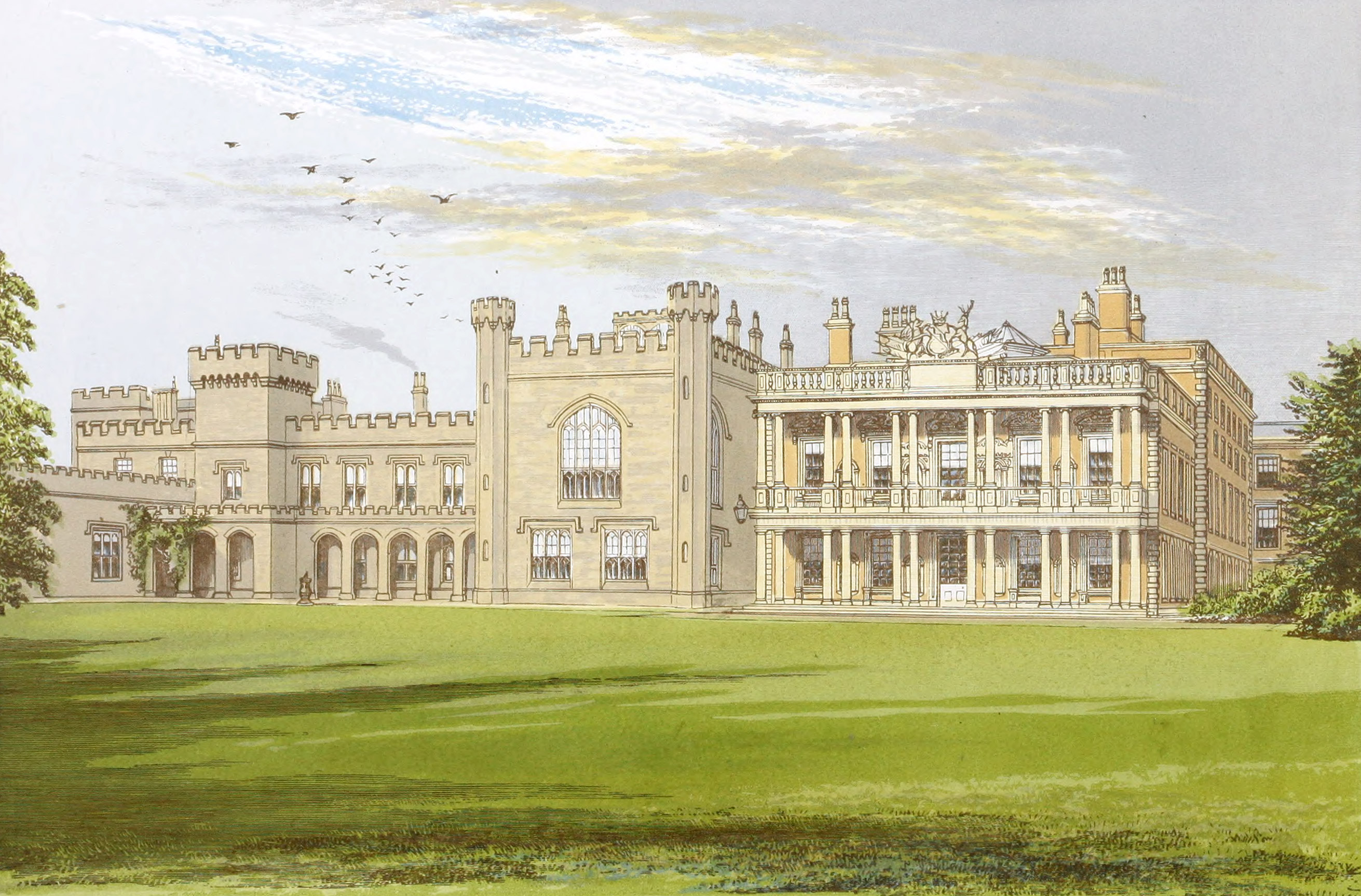 Near Prescot, Lancashire.—Earl of Derby.

The family of the Stanleys, Earls of Derby, is second, says Sir Bernard Burke, to none in the Peerage of England; and I may add that the pages of history well attest the truth of the remark, on which the “last words of Marmion” have further set the seal of poetry.

Knowsley Hall is finely and conspicuously situated in the Hundred of West Derby, in the county of Lancaster, and thence, and not from the town of Derby, as might be supposed, the Earl of Derby derives his title. It has been altered, enlarged, reduced in size, and again rebuilt, by one or other of its various possessors in the course of centuries.

The estate was originally, as given in “Domesday Book/’ Chenulneslei, and was held at the time of the survey by the family of Uchtred, together with other manors. It next passed to the De Knowsleys, and from them to the Lathams, and then to the

Stanleys, through the marriage of Sir Thomas Stanley, Lord Deputy of Ireland, with Isabel, daughter of Sir Thomas Latham, of Latham and Knowsley, in the reign of Richard the Second.

The house was greatly enlarged by the first Earl of Derby for his son-in-law, King Henry the Seventh, in whose service he had so greatly distinguished himself, and on whose head, as Earl of Richmond, he placed the crown on Bosworth Field on the death of Richard the Third. At the ensuing coronation he acted as Lord High Steward.

The principal part of the mansion was built by James, the tenth Earl, in the reigns of King William the Third, Queen Anne, and King George the Second.

The east front is occupied by a private chapel, and on the south is a corridor, over which are the arms of the family, with the following inscription:—“James, Earl of Derby, Lord of Man and the Isles, grandson of James, Earl of Derby, and of Charlotte, daughter of Claude, Duke de la Tremouille, whose husband James was beheaded at Bolton, 15th. October, 1652, for strenuously adhering to Charles the Second, who refused a bill passed unanimously by both Houses of Parliament, for restoring to the family the estates lost by his loyalty to him, 1732.”

The park is the largest in the county, being between nine and ten miles in circumference. It is ornamented by plantations and trees of ancient growth, and graced in front by a lake nearly a mile in length. Beautiful views are obtained from the higher grounds, especially towards the sea.

The paintings are numerous and valuable, especially Belshazzar’s Feast, by Rembrandt, and the suicide, if so it may be called, of Seneca in the bath by Rubens.

There is a curious collection of family portraits, twenty-two of which were etched by Hamlet Winstanley, a pupil of Sir Godfrey Kneller, and published under the title of the “Knowsley Gallery.”

The apartments are very fine and of large size.

The family of the Stanleys were Lords paramount of the Isle of Man and the Isles, from the reign of Henry the Fourth to that of George the Second, holding under the Crown by the service of presenting two Falcons to the King on his coronation day. It derives from Adam de Aldithley, who is stated to have come with Duke William at the conquest to England, and his grandson, William de Aldithley, marrying the only daughter and heiress of Thomas Stanley, of Stafford, and having received with her the manor of Thalk, in Staffordshire, exchanged it with his cousin, Adam de Aldithley, for Stanley, which he made his seat, and assumed the name of the place as his own, in honour of his wife, who was of noble Saxon descent.