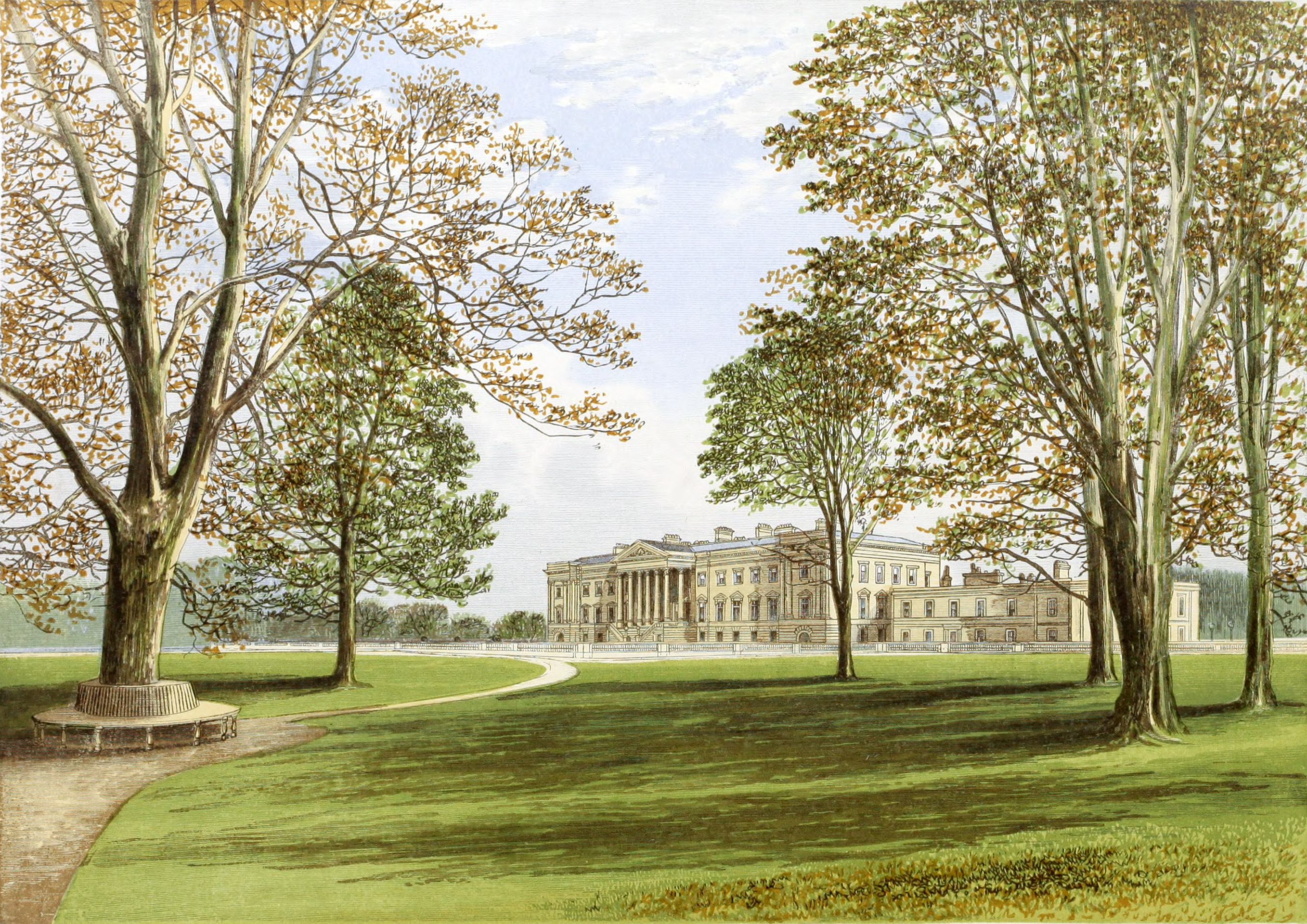 Near Hamilton, Lanarkshire.—Duke of Hamilton.

It is simply impossible, with the very limited space at my command, to give more than a mere outline of the descent of this illustrious house, and a most brief description of their splendid seat, the embarras de richesse in each case being so great.

As to the place, the park, which is of great extent, and the scenery of the most diversified beauty, is bounded on one side by a full sweep of the broad and majestic Clyde, and on another, at a distance of two miles, the river Evan runs between two lofty and precipitous banks, the one crowned by the Chateau of Chatelherault, and the other by the Castle of Cadzow, itself romantically situated on a high and steep rock overlooking the grand old forest of the same name.

Hamilton Palace is one of the most noble residences in Europe, and its collection of precious works of art and valuable curiosities far surpasses those of Chatswortli, or of Stowe as it, was. In fact the whole place is all but of regal magnificence, and a mere catalogue of the contents of the house would fill a volume.

There is a splendid suite of royal rooms intended for the reception of persons of the most exalted ranks. The ancient gallery has its walls filled with a grand series of family portraits, from the Regent Duke of Chatelherault downwards, and these, as may be supposed, by many of the great artists, such as Cornelius Jan sen, Vandyke, Mytens, Kneller, Lely, Reynolds, and others. It leads into another ancient suite of state apartments, adorned with many of the masterpieces of the Italian school of painting, namely, Bassano, Leonardo da Vinci, Guido, Guercino, Sassoferato, Pietro da Cortona, Titian, Bronzino, Luca Signorelli, Antonello da Messina, Sandro Botticelli, and Claude, besides others of the Spanish and Flemish schools.

Besides these are costly cabinets of ebony and other rare materials; oriental and ancient manuscripts; rare editions of the classic authors; etc., etc., etc.

The following is an outline of the descent of this eminent house:—

Archibald Douglas, of Douglas, died in 1240.

Archibald Douglas, fifth Earl of Angus, so well known as “Bell the Cat.”

Archibald Douglas, eighth Earl of Angus, and Earl of Morton.

Sir William Douglas (a descendant of the fifth Earl).

Sir William Douglas, ninth Earl of Angus (on the death of his relative).

James Douglas, Earl of Arran, K.T., K.G., became by patent, August 10th., 1698, on the Duchess surrendering her honours, Duke of Hamilton, Marquis of Clydesdale, etc., with the precedency of the original creation, April 12th., 1643, in the same way as if he had regularly inherited, and was created an English Peer September 11th., 1711, as Baron of Dutton, and Duke of Brandon.

James George Douglas-Hamilton, seventh Duke of Hamilton, and fourth Duke of Brandon, who succeeded also as Marquis of Douglas, and Earl of Angus, on the decease of Archibald, last Duke of Douglas, in 1761.

Archibald Douglas-Hamilton (his uncle), ninth Duke of Hamilton, and sixth Duke of Brandon.