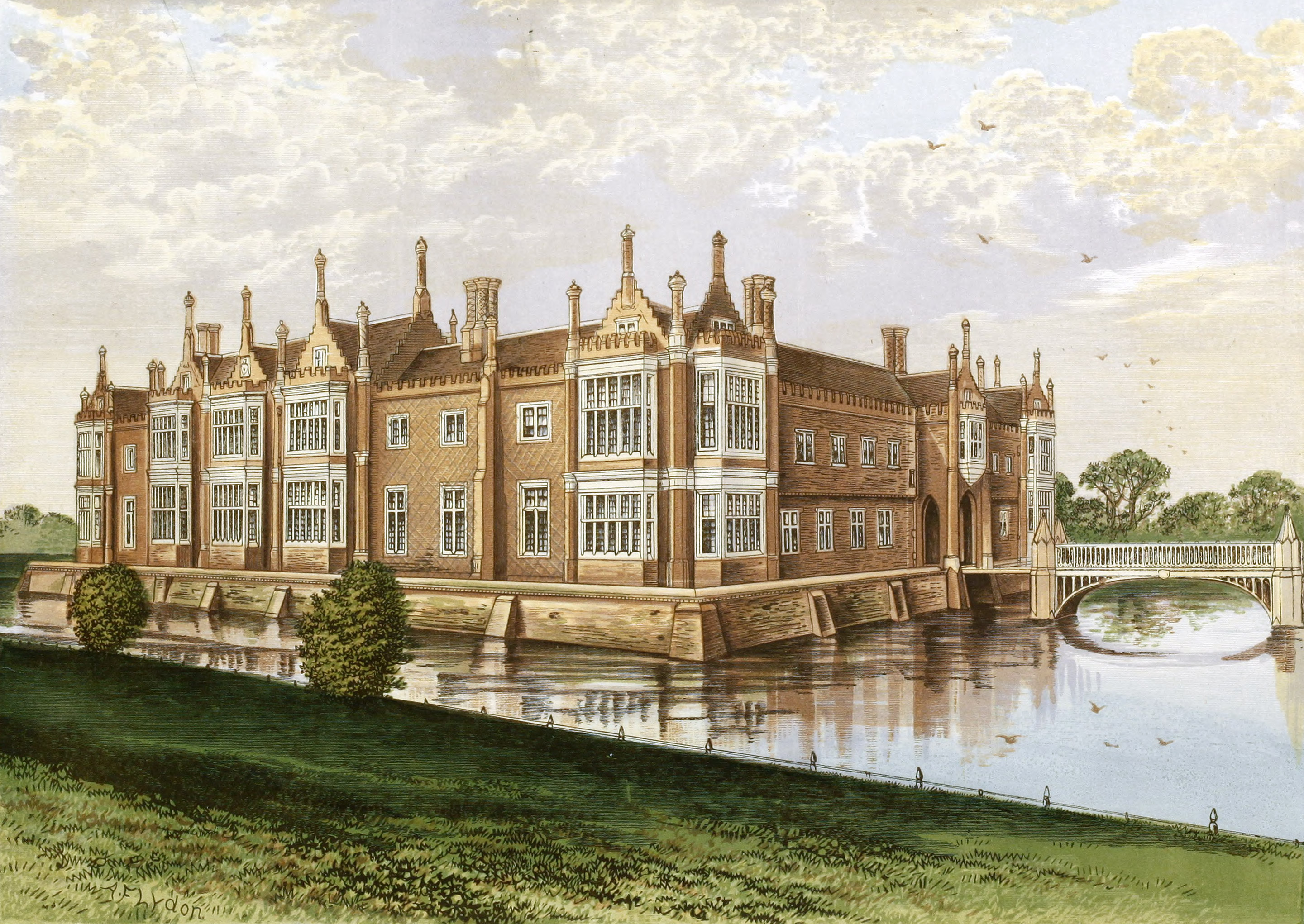 This stately residence is situated in the hundred o£ Bosmere and Claydon, four miles south-east from Debenham^ and eight from Ipswich, in a beautiful park, comprehending four hundred acres, which contains some of the finest oak-trees in the county, many of them of great age, and is abundantly stocked with deer, there never being less than seven hundred head, among which are some remarkably large stags.

The Hall has been the principal seat of the family of Tollemache from the period of its erection, and here Sir Lionel Tollemache was honoured by a visit from Queen Elizabeth, for five days, from August 14th. to the 18th. inclusive, in the year 1561. Her Majesty was entertained with great splendour and sumptuous hospitality, and during her visit stood godmother to Sir Lionel’s son, and at the same time presented his mother with a lute, which is still preserved.

Very few innovations have been made in the mansion, and, with regard to its exterior appearance, it exists in all its pristine grandeur. It is a quadrangular structure, entirely of brick, environing a court, and completely surrounded by a terrace and moat. The approach is by drawbridges, on the east and south fronts, which are raised every night.

The family flourished in the greatest repute, and in an uninterrupted male succession in this county, from the arrival of the Saxons in this kingdom, to 1821, having borne a conspicuous part in the annals and history of the county for above thirteen hundred years.

Hugh Talmache, who subscribed the Charter, sans date, but about the reign of King Stephen, of John de St. John, granted to Eve, the first Abbess of Godstowe, in Oxfordshire, is the first of the family on record. In his old age he became a monk at Gloucester, and gave to the Abbey there a moiety of his town of Hampton, which Peter, his son, confirmed in the time of the first Abbot.

William Talmache gave lands in Bentley and Dodness to the priory of Ipswich, which gifts were confirmed in the reign of King John. In the twenty-fifth year of the reign of Edward the First, Sir Hugh de Tolmache held the Manor of Bentley of the crown, by Knight’s Service, servitium militare.

Sir Lionel Tollemache, of Bentley, who flourished in the reigns of Henry the Sixth and Edward tlie Fourth, married the heiress of the family of Helmingham, by which alliance he acquired this estate. His son,

John, was the father of

Lionel, who most probably built the present edifice. He was High Sheriff of the county, and also of Norfolk, in 1512. In the thirty-eighth year of his reign, King Henry the Eighth granted him the Manors of Wansden, Le Church Hey, Bury Hall, Wyllows, and Overhall to hold of the crown by Knight’s service. His son,

Lionel, was knighted by Queen Elizabeth, and was High Sheriff of Norfolk and Suffolk in 1567, He married Dorothy, the daughter of Sir Richard Wentworth, of Nettlested, and was the father of

Sir Lionel Tollemache, who was High Sheriff of the above-named counties in 1593. His son,

Sir Lionel, was High Sheriff of Suffolk in 1609, and was advanced to the dignity of a Baronet, at the first institution of that Order in 1611, being the twelfth Baronet in the order of precedency. In 1617 he was again High Sheriff of this county, and married Catharine the daughter of Henry, Lord Cromwell, of Wimbledon. He was succeeded in the title and estate by his son,

Sir Lionel Tollemache, Bart., who lived in great honour and esteem in the county, and was succeeded by his son,

Sir Lionel, who married Elizabeth, the daughter and heiress of William Murray, the first Earl of Dysart, by whom he had a son.

Sir Lionel Tollemache, the fourth Baronet, who, on the death of his mother, in 1696, became the second Earl of Dysart, a title derived from the Royal Borough of that name in Fifeshire. By the Act of Union, in 1707, he became a Peer of Great Britain. His Lordship married, in 1680, Grace, the eldest daughter and co-heiress of Sir Thomas Wilbraham, Bart., of Woodhey, in Cheshire, by which alliance the family became possessed of vast estates in Cheshire. The second brother of this Earl was Thomas Tollemache, a gallant and distinguished officer in the reign of King William the Third. He was killed in an unfortunate attempt to destroy the Harbour of Brest, 30th, June, 1694, and is buried at Helmingham.

The Earl of Dysart died February 3rd., 1726, and was succeeded by his grandson,

Lionel, the third Earl, who was created a Knight Companion of the most ancient Order of the Thistle, in 1743. His Lordship died in 1770 and was followed by his son,

Lionel, the fourth Earl of Dysart, who died at Ham House, the 22nd. of February, 1799, aged sixty-three. His honours and estates then came to his brother,

Wilbraham, the fifth Earl of Dysart, and Baron Huntingtower of the kingdom of Scotland, and a Baronet, who died at Ham House in 1820, and was succeeded by

Louisa, Countess of Dysart, who died at Ham House in 1841, when the estates devolved on