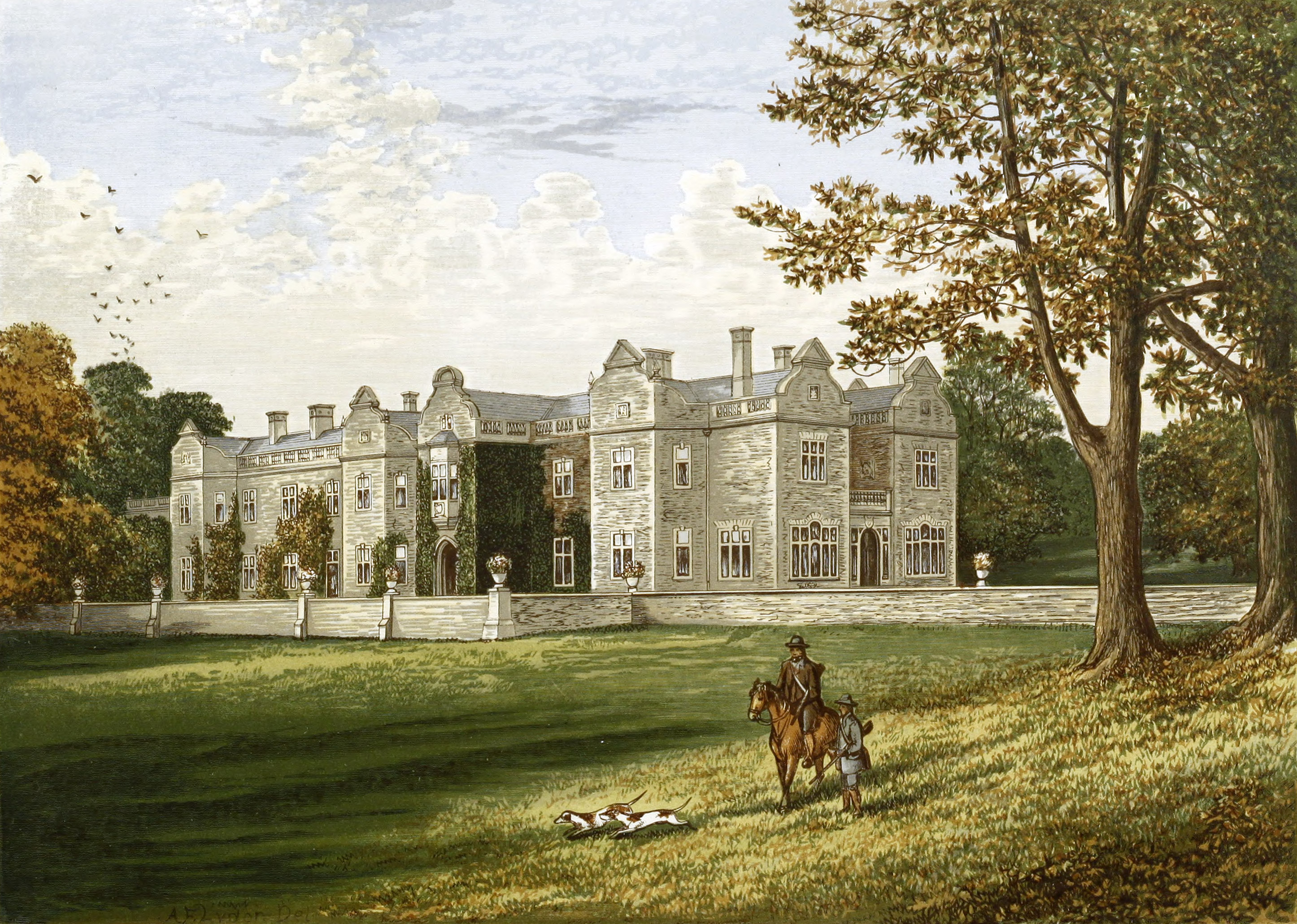 Brantingham Thorpe stands on a high, terrace commanding a most extensive and beautiful view of the course of the river Humber for more that twenty miles, and of the Vale of York, broken by the towns of Howden and Selby, the spire of Heminboroughj and on the opposite side of the river the wooded hills of Lincolnshire.

The present house, a long uneven structure of grey stone, broken by gables and balustrades, is of various dates. The porch and the centre of the house date from Elizabeth’s reign, during which one Anthony Smetheby, “Dominus de Brantingham,” as he is described on a brass plate in the Church, bearing his arms, lived and died there, A.D. 1574. His daughters and co-heiresses married into the Sotheby, of Birdsall, and the Ellerker families.

The house was added to by the late owner. Captain Shawe, and largely increased by the present proprietor.

The dining-room, panelled with oak, is enriched by five landscapes painted in Italy by Jolly, at the order of the great Lord Chesterfield, for the grand drawing-room at Chesterfield House, in the beginning of the last century, and a sixth one of the Ponte di Trinitià, at Florence, by Mariow, of the same date.

The library boasts an almost complete collection of topographical works relating to the county of York, and more especially to the East Riding.

The entrance to the grounds is about a mile from the Brough station on the North-Eastern line, flanked by a lodge, recently erected in the Elizabethan style, and in good keeping with the hall. The drive is through well undulated park scenery, with a considerable slope from north-east to south-west. As it gradually rises, a charming view of the river and of the Lincolnshire coast expands, till, when you reach the natural terrace on which the house stands, you command a lovely panoramic view of the fine estuary of the sea, known as the river Humber, but, seeing that it is here fully three miles wide, and viewed from the terrace lengthwise is seen for a distance of at least twelve miles through which it retains the same width, at that point branching into the Trent and the Ouse right and left, it realises, with the foreground beautifully broken by the groups of trees in the park, the idea of a lake of almost unlimited extent. There is, indeed, no site of such commanding beauty in the East Riding.

The hall stands at an elevation of some two hundred feet or more above the level of the river, and the hills rise above it to a similar height, clothed with massive plantations, broken every here and there with ordinary fields, which, in some cases, lose themselves over the crown of the hills, thus giving distance and variety to the landscape. The hall is Elizabethan in style, built of stone, covered with ivy, roses, etc. Fronting the house is a terrace, about fifty feet wide, bounded by a low parapet-wall. Two Wellingtonias, planted on a knoll at the south-east end of the bouse, are interesting, as souvenirs of a Royal visit, having been planted by their Royal Highnesses the Prince and Princess of Wales, July 21st., 1869. They show every prospect of making noble ornamental trees. The ground rises rapidly at the back of the hall, by a terraced slope of some ten feet in height, reached by a flight of steps, and on this higher level is the flower garden.

The following is the account of the descent of the family, as recorded in Burke’s “Peerage and Baronetage.” He states that the family came originally from Saxony.

Walter Sykes, of Sykes Dyke, in the county of Cumberland.

Walter Sykes, of Sykes Dyke, tempore Henry the Sixth, was father of

William Sykes, of Leeds, whose son,

Richard Sykes, also of Leeds, had one son,

Richard Sykes, Alderman of Leeds, and Lord of the Manor, which he purchased in 1625. He married, January 30th., 1593, Elizabeth Mawson, and had with other issue, a younger son,

William Sykes, Lord of the Manor of Leeds, married Grace, daughter and co-heiress of Josias Jenkinson, Esq., of Leeds, and left, among other children,

Daniel Sykes, Esq., born 1632, Mayor of Hull, and a merchant of eminence there, who left by his wife Deborah, daughter of William Oates, Esq.,

Richard Sykes, Esq., born in 1678, also a merchant of Hull. He married Mary, daughter and co-heiress of Mark Kirkby, Esq., of Sledmere, and was succeeded by

Richard Sykes, Esq., who built the house at Sledmere, married, firstly, Jane Hobman, and, secondly, Mrs. Edge, but died without issue, and was succeeded by his brother,

Sir Christopher Sykes, D.C.L,, second Baronet, born in 1749, M.P. for Beverley. He married Elizabeth, daughter of William Tatton, Esq., of Withenshaw, Cheshire, and was father of

Sir Mark Sykes, third Baronet, whose first wife was Henrietta, daughter and heiress of Henry Masterman, Esq., of Settrington Hall, near Malton. He married, secondly, August 2nd., 1814, Mary Elizabeth, sister of Wilbraham Egerton, Esq., but having no children, was succeeded by his brother.

1. Sir Tatton Sykes, fifth Baronet, whose most munificent acts in the way of building, rebuilding, restoring, endowing, and adorning churches on his very large estates in the East Riding, will be remembered in Yorkshire for generations to come. He married, August 3rd., 1874, Christina Anne Jessie, eldest daughter of George Augustus Cavendish Bentinck, Esq., M.P. for Whitehaven.