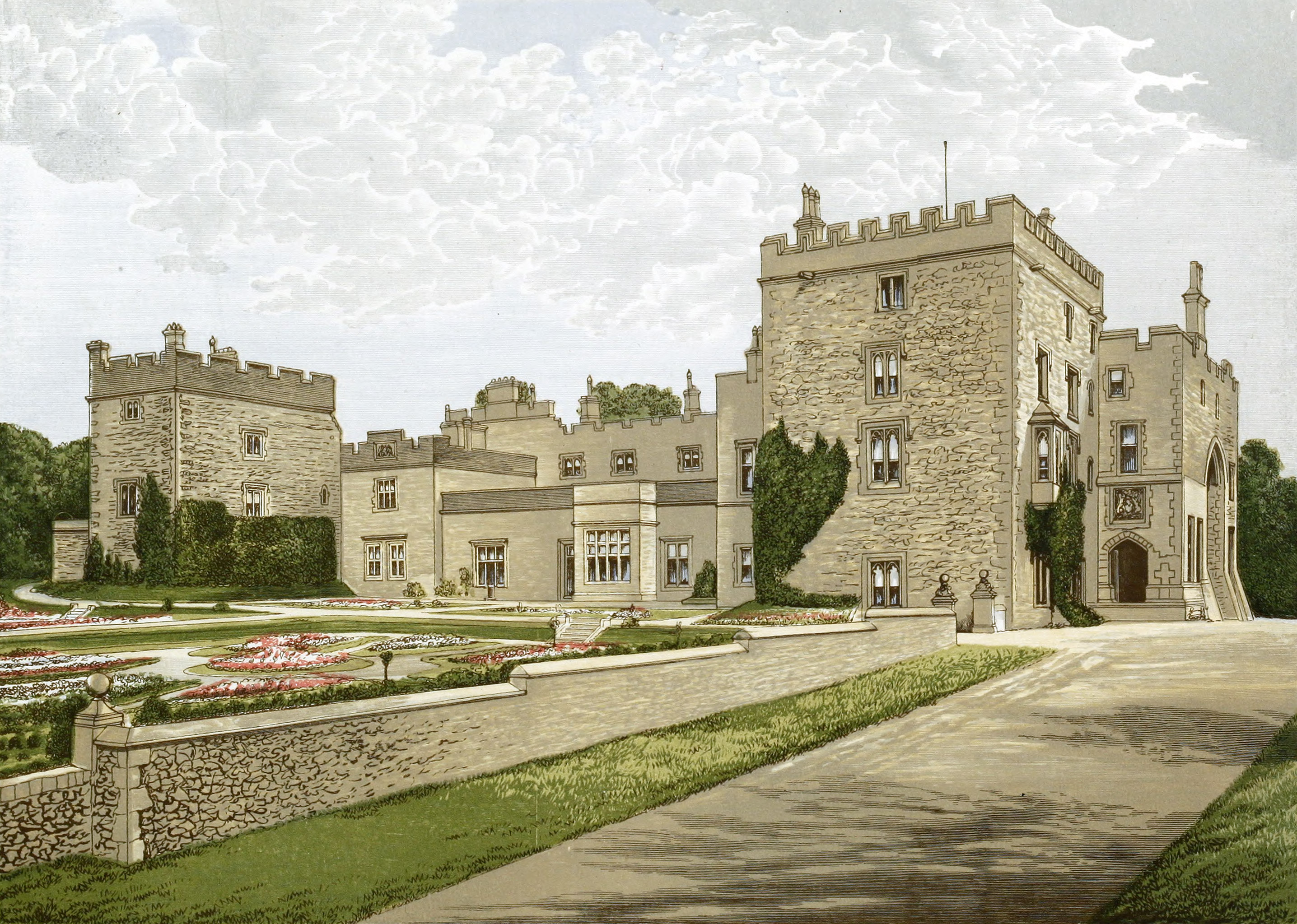 Muncaster Castle was originally built by the Romans to guard a ford over the river Esk^ which runs immediately beneath it. One tower of the old castle remains entire, and has been inhabited ever since; some foundations and walls of the other towers exist. It has lately been restored by Mr. Salvin. The old moat and other outbuildings can still be traced. From its situation a mile and a half from the sea, and half way up Muncaster fell, it commands the pass over Hardknot and the low ground by the sea. It came into the possession of the Pennington family about the time of the Norman Conquest, and they then removed to it from Pennington-in-Furness, where the site of the old Saxon encampment still remains.

Muncaster Castle has been their principal residence, descending from father to son, since the Conquest. King Henry the Sixth stopped here after the battle of Hexham, when a fugitive, and on leaving he gave a glass cup to Sir John Pennington, out of which the family have ever since been baptized. It is still unbroken, and is commonly called “The Luck of Muncaster.”

The plan of the Castle in former days was four square towers connected by a longer building, enclosing a quadrangle with moat and gatehouse and chapel. From a terrace beautiful views up the valley of the Esk ending in Scaw-fell are seen. The church is very old, but was thoroughly restored by Josslyn, fifth Lord Muncaster, and contains the tombs of most of the Pennington family.

In lineal descent from the above-named Sir John de Pennington, was

William Pennington, Esq., of Muncaster, created a Baronet June 21st., 1676. He married Isabel, eldest daughter of John Stapleton, Esq., and had issue, with other children, his heir.

Sir Joseph Pennington, Bart., M.P. for the county of Cumberland. He married the Honourable Margaret Lowther, daughter of John, first Viscount Lonsdale, and had two sons, of whom the elder.

Sir John Pennington, Bart., M.P. for Cumberland, and Lord Lieutenant for the county of Westmoreland, dying without issue, was succeeded by his brother.

Sir Joseph Pennington, Bart., who married Sarah, daughter and heiress of John Moore, Esq., of Somersetshire, by whom he had

Sir John Pennington, Bart., who was created a peer of Ireland October 21st., 1783, as Baron Muncaster. He married Penelope, daughter and heiress of James Crompton, Esq., and died in 1813, leaving no male issue, when the title devolved, by remainder, to his brother.

Sir Lowther Pennington, second Baron, a General Ofl&cer in ‘the Army. He married in 1802, Esther, second daughter of Thomas Barry, Esq., of Clapham, Surrey, and widow of James Morrison, Esq., by whom he left at his decease, in 1818, an only son.

married, December 15th., 1828, Prances Catherine, youngest daughter of Sir John Ramsden, Bart., and by her had

Sir Gamel Augustus Pennington, fourth Baron, who married, August 2nd., 1855, Lady Jane Grosvenor, daughter of Robert, first Marquis of Westminster, but died, leaving only a daughter, June 13th., 1862, and was succeeded by his next brother.