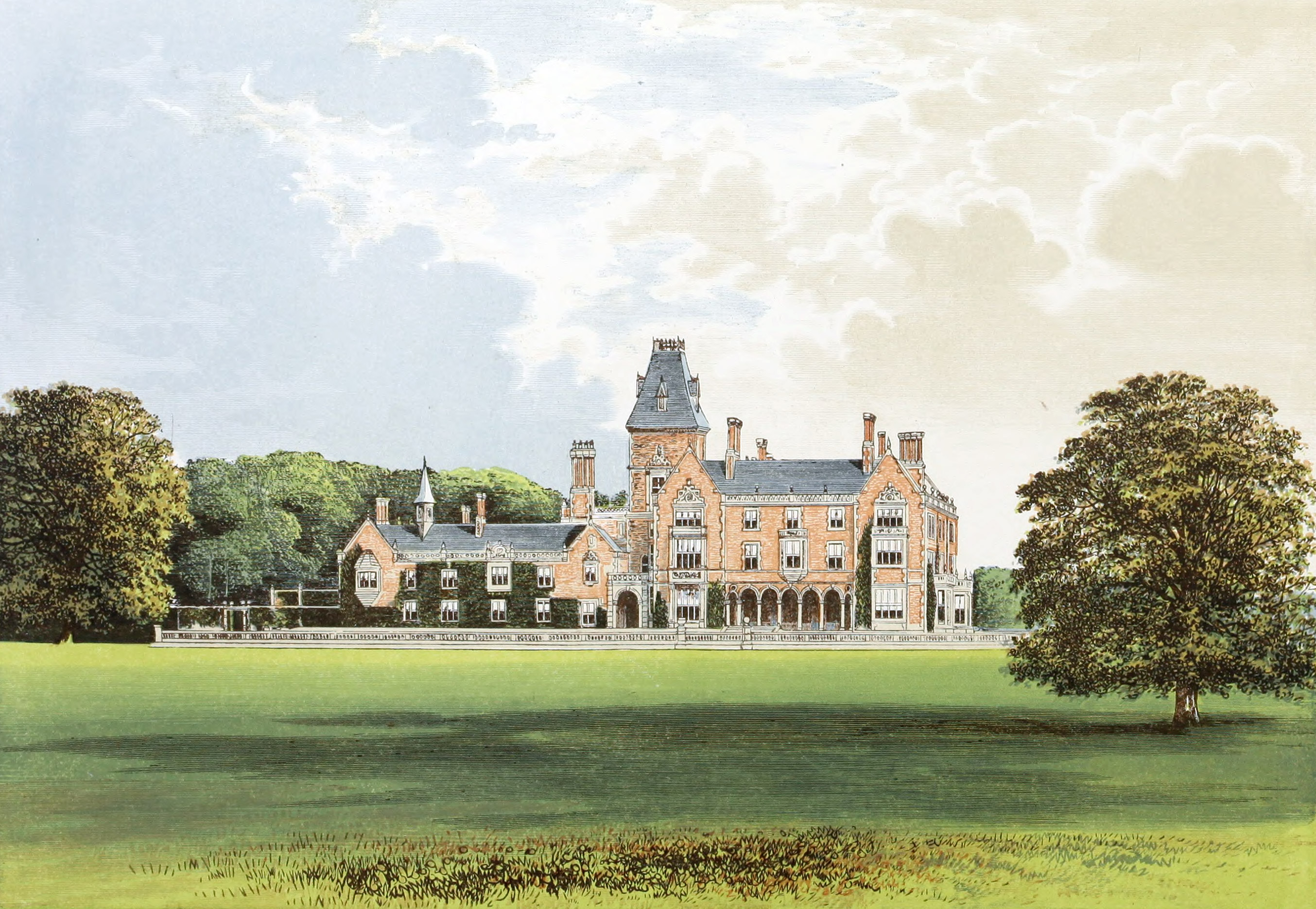 The present house, which was begun in 1859, is built of brick and Corsham stone, in the style of the architecture of the reign of James the First. It has a tower about a hundred feet high, from which, on a clear day, a magnificent view is obtained, not only of the neighbouring country, but even of the French coast and a wide extent of sea, which is also to be seen in some directions from the lower windows.

It stands nearly at the summit of the Weald of Kent, and the top of the tower is probably the highest point in the county.

Trees of all kinds grow well, the oak especially, being natural to the soil. There are some fine specimens of trees of modern introduction into the kingdom, such as the Wellingtonia, etc., etc.

Hemsted is in the parish of Benenden, but is a manor of itself.

Robert de Hemsted was the owner of this place in the reign of Henry the Third, either deriving his name from, or giving it to it. It next became the property of

James de Echyngham, who paid aid for it in the tenth year of that of Edward the Third, on the making the Black Prince a knight. Following him,

Sir Robert Belknap, Knight, Chief Justice of the Court of Common Pleas in the reign of King Richard the Second, became possessed of it, but, as an adherent of his, was attainted by Bolingbroke on coming to the throne, and the estate was estreated to the Crown. The new king granted it to

William de Guldeford, High Sheriff of the County, who made great additions to the mansion. One of his descendants entertained Queen Elizabeth here for three days. Afterwards,

Robert Guldeford, in the reign of Queen Anne, sold it, under an Act of Parliament, to

Sir John Norris, Knight, Admiral of the Fleet, and Vice Admiral of England. It remained in his family till

John Norris, Esq., in the year 1780, had it sold in like manner by an Act of Parliament, the purchaser being

Thomas Hallet Hodges, Esq., Sheriff of the County in 1786, of whose descendant it was purchased by

John Hardy, Esq., of Dunstall Hall, Staffordshire, a Bencher of the Inner Temple, M.P. for Bradford from 1833 to 1817, married, August 16th., 1804, Isabel, daughter of Richard Gathorne, Esq., of Kirkby Lonsdale, Westmoreland, and had three sons and nine daughters. The sons were,

“This eminent statesman, educated at Shrewsbury School and University College, Oxford, B.A. 1837, was called to the Bar in 1840, and became a Bencher of the Inner Temple. He was elected M.P. for Leominster in 1856, and represented that constituency until 1865, when he was returned for the University of Oxford. He filled successively the offices of Secretary of State for the Home Department, 1858- 1859; President of the Poor Law Board, 1860-1867; Secretary of State for the Home Department, 1867-1868; Secretary for War, from 1874 to 1878; and Secretary of State for India, 1878 to 1880. In that year he was raised to the Peerage as Viscount Cranbrook, of Hemsted, Kent, and by Royal License obtained for himself and his heirs the additional surname and arms of Gathorne.” The eldest sou,