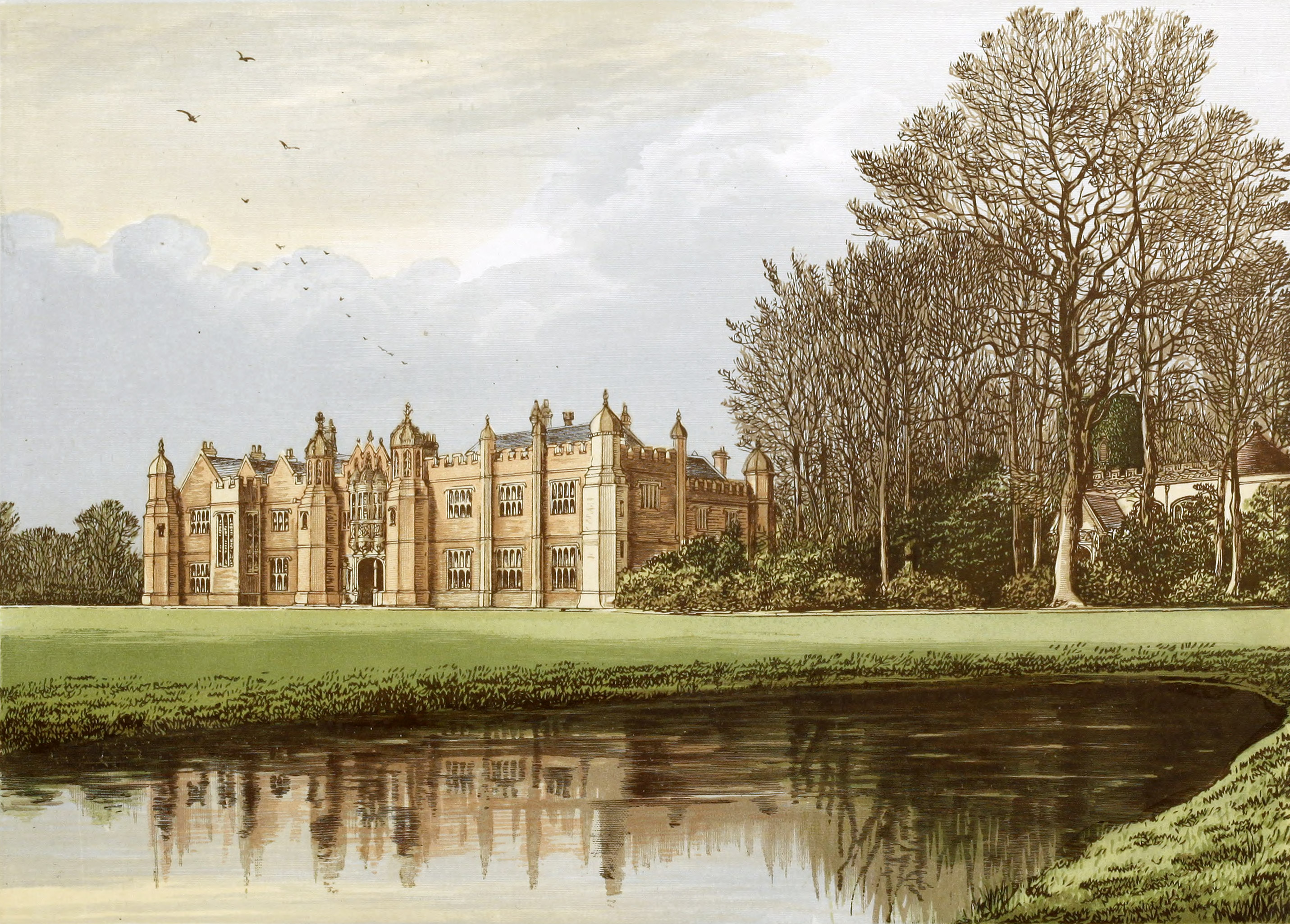 Hengrave Hall is an admirable example of the fine old houses with which this country abounds. The date of its erection is fixed by the following inscription in three compartments, cut in stone on the outside of a curious oriel window over the entrance: “Opus hoc fieri fecit Toma Kytson—In Dieu et mon droit—Anno D’ni mccccc tricesimo octavo.” This inscription runs round a fillet beneath the bow window, and the second division of it is under the royal arms.

This mansion afi’ords a unique specimen of ancient domestic architecture. The whole is of brick and stone. “The gateway,” observes Mr. Gough, “is of such singular beauty, and in such high preservation, that perhaps a more elegant specimen of the architecture of that age can scarcely be seen.” It was once more extensive than at present, several alterations having been made, and some parts at the north and north-east angle taken away, in 1775. The building, which is still large, encloses a quadrangular court, and the apartments open into a gallery, the windows of which overlook this court. They formerly contained a quantity of stained glass, and the bay window in the hall still retains some fine specimens, consisting of various armorial bearings. The window also is richly adorned with mullions, fan-tracery, pendants, and spandrils, all of which nearly resemble the highly florid examples in King Henry the Seventh’s Chapel. The turrets at each side of the entrance and at the corners of the building, as also two small turreted columns at the door, bear a striking resemblance to Moorish minarets, or the capitals of Indian edifices.

Some years since this mansion was the abode of a sisterhood of expatriated nuns of Bruges, to whom the owner of Hengrave liberally afibrded an asylum. During- their residence here, they lost, by death, their superior, a lineal descendant of the great Sir Thomas More. When the decree in favour of the emigrants was issued in France, they availed themselves of the permission to return to their own country.

Very near the hall stands a small church, which is distinguished by one of the ancient round towers that seem to be peculiar to this part of the kingdom. No use seems to have been made of the edifice for several years, the Eectory having been consolidated with Flempton. Of the monuments within it, the principal are those of the Kitsons; one of John Bouchier, Earl of Bath, who married into this family; one of his son, John, Lord Fitzwarren; one of Thomas, son of Earl Eivers; and several of the Gages.

There is a fine marble tomb, in memory of Sir Thomas Kitson, the founder of Hengrave Hall, with effigies of himself and one of his wives; but it is rather singular that in the inscription a blank is left for the parentage of his first wife. This gentleman, who came from the obscure village of Yealland, in Lancashire, having obtained immense wealth by commercial speculation in the cloth trade, received the honour of knighthood. He purchased the manor of Hengrave from the crown, and possessed several other estates in Sufiblk, Devonshire, Dorsetshire, and the city of London, for which he served the office of Sherifi”. He was afterwards appointed by the Duke of Norfolk Steward of the Franchise of Bury St. Edmunds, and died September 13th., 1540, aged fifty-five.

This ancient and distinguished family claims its origin from

The Sire de Gaugi, whose name is on the Roll of Battle Abbey as having fought at Hastings. It is represented by the head of the House, Lord Gage, one of whose ancestors.

Sir John Gage, Baronet, of Firle, married Lady Penelope Darcy, daughter and co-heiress of Lord Rivers. It is related of her that she “was wooed by three suitors at the same time, and the knights, as in chivalry bound, were disposed to contest the prize with target and lance; but the lady herself forbad the battle, and menaced the disobedient knights with her lasting displeasure, promising, jocularly, that if they had but patience, she would have them all in their turns; and she actually fulfilled her promise, for she married, first. Sir George Trenchard, of Wolverton, Dorsetshire; secondly. Sir John Gage, of Firle; and thirdly. Sir William Hervey, of Ickworth.^^

The son of the second marriage,

Edward Gage, Esq., was created a Baronet July 15th., 1662, and was followed by a direct line of successors in the title, of whom the ninth.

third son of the fifth Duke of St. Albans.