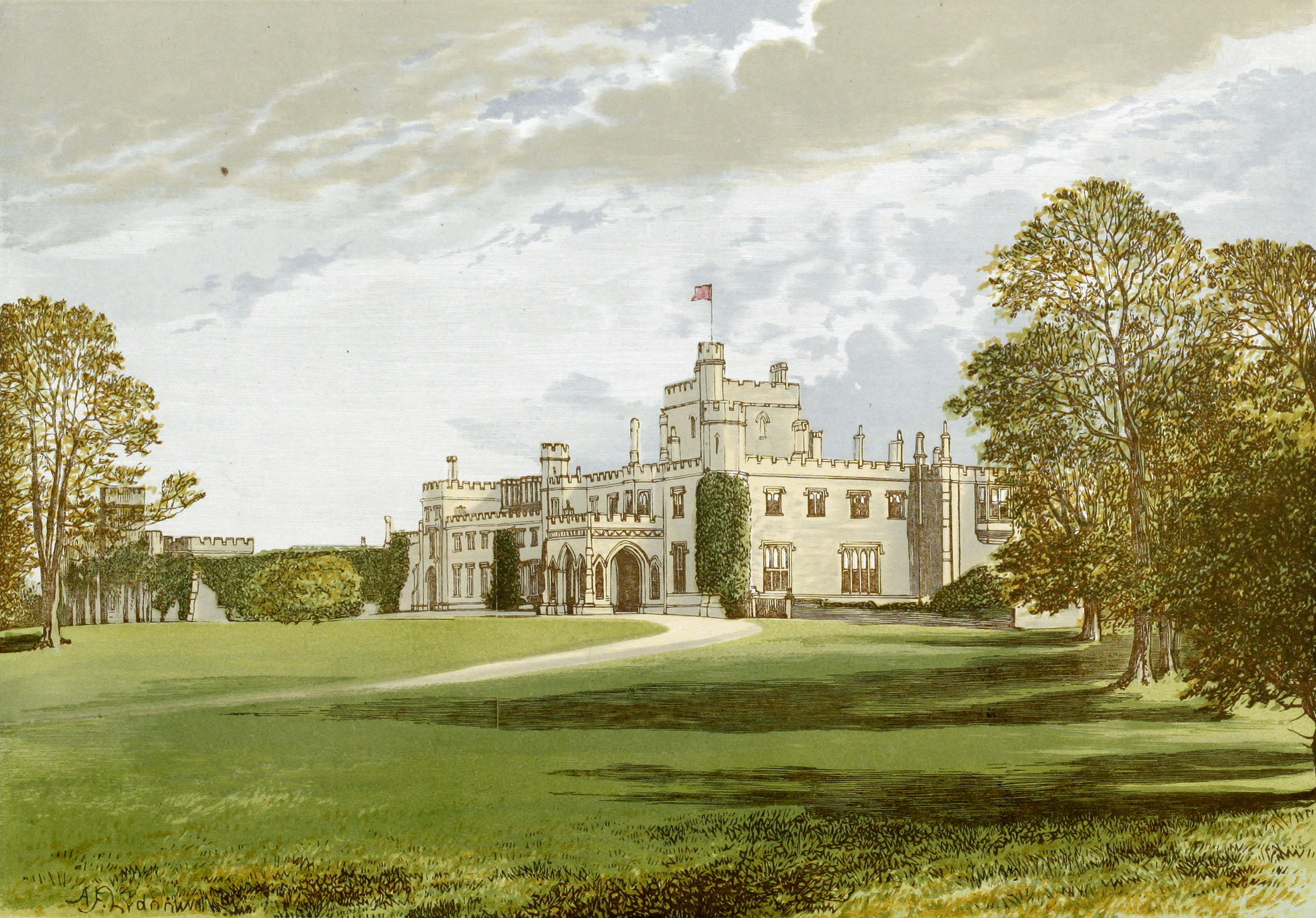 The view towards tlie soutli from tliis fine seat is bounded by that range of bills which extends from Scotland southwards into the centre of England^ and which here presents one of its most remarkable features, in the high hill called Mow Cop (a corruption of the old British word Moel, and the Saxon word Cop), which is about twelve hundred feet above the level of the sea, and surmounted by a ruined tower, and a singularly isolated rock, called “The old man of Mow,” from its resemblance to a gigantic human figure. To the summit of this range of hills the handsome woods of the Moreton property extend, forming a splendid and picturesque view from the Hall beneath.

The park is entered by two ornamental stone lodges.

The ancient house on this property, built in the year 1602, was a fine specimen of the old black and white timbered mansions of Cheshire, with innumerable gable ends and carved wood work, but having fallen into a state of total dilapidation, the building was taken down in the year 1844 by the late owner of the property, Mr. Ackers, and in its stead, on a different site, a splendid Hall in the Gothic style was commenced by him in the year 1841, under the celebrated architect Mr. Blore, and finished in 1843.

The house is built of stone from the Moreton quarries on Mow Cop, and presents a very handsome appearance, having a square tower in the centre, and many smaller turrets and towers of various forms.

The interior is composed of a spacious entrance-hall and vestibule, each lined with Caen stone, elaborately carved; a splendid dining-hall sixty-four feet in length, with a massive wood pitched roof thirty-six feet high, walls of Caen stone, and richly-carved chimney-piece of the same material; a minstrel gallery at one end, with fine oak screen and a raised dais at the upper end of the hall, and lofty Gothic windows, ornamented with stained glass, complete this fine banqueting hall. From thence, passing through an ante-room of paneled oak, is a handsome saloon, fifty feet in length, and a smaller drawing-room hung with beautiful old Oudenarde tapestry in a high state of preservation. Besides these apartments the library and other rooms are spacious and well arranged.

George Holland Ackers, Esq., of Moreton Hall. He formerly belonged to the Royal Horse Guards Blue, was Lieutenant-Colonel of the Queen’s Own Staffordshire Yeomanry, Commodore of the Royal Victoria Yacht Club, Magistrate and Deputy- Lieutenant for Cheshire, and served as High Sheriff for the County in the year 1852.