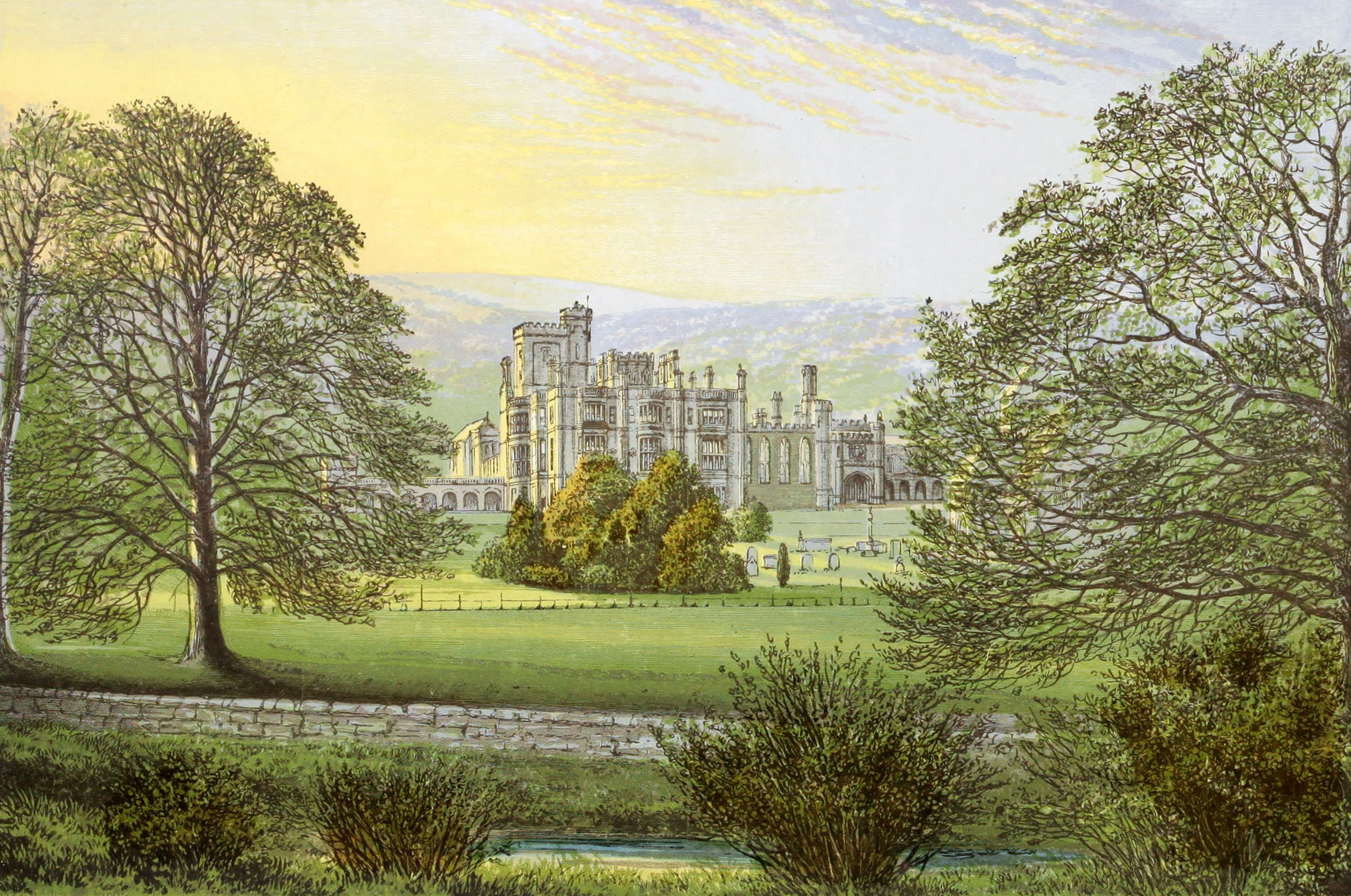 The situation of Ham Hall is extremely beautiful, and the house itself is well adapted to the scenery which surrounds it. The old mansion was standing in the year 1820, but was soon afterwards pulled down, and the present fine Elizabethan edifice erected it its place.

There are two streams, the Manifold and the Hamps, which for some miles previously have followed a subterranean course. The following is the account given of them by Rhodes:—”Returning from the meadows to the garden-grounds of Ham, I passed a narrow foot-bridge at the base of a rocky bank, from whence the two subterranean streams, the Hamps and the Manifold, emerge, and form a river at a burst. This is one of the curiosities of this romantic place. The river Manifold formerly flowed beneath the amphitheatrical sweep of wood that forms the background of Ham Hall; but it has abandoned its ancient course, where it had continued to run for ages, and now pursues its way for the space of five or six miles through caverns deep in the mountains, where it has obtained a passage to its forsaken channel, which it again enters in the gardens of Ham. Here the united rivers become a powerful stream, which, within a few yards of the place where they first appear, is precipitated over an artificial barrier, when it forms a cascade of considerable extent and great beauty. The Manifold now becomes a busy and brilliant stream, which, after winding round a part of the village about a quarter of a mile from the principal front of the Hall, flows through some pleasant meadows, and enters the Dove at a short distance from Thorpe Cloud.”

The Vale of Ham is of singular beauty, thus described by the tourist,—“I felt as if I had been treading on fairy-ground; the parts were so beautiful and so exquisitely combined, and the whole so rare and unexpected that it seemed more like a scene of enchantment that might soon pass away than anything real and permanent.” “A village of a few houses only scattered amongst trees, a country church with a tower nearly covered with ivy, verdant meadows watered by a busy stream, everywhere sparkling with light, and on a gentle eminence a venerable mansion—the old Hall rising out of, and backed by, luxuriant foliage, are the principal features of this lovely spot, which is one of the most romantic little vales that nature ever formed. No glen in the Alps was ever more beautiful, more picturesque, or more retired.”

Here Congreve wrote the “Old Bachelor” and part of the “Mourning Bride.”

The family of Hanbury, of which Robert W. Hanbury, Esq., M.P., the present owner of Bam, is the sole surviving male representative, were originally settled at Hanbury, in this county, where is the tomb of Sir John de Hanbury, a crusader, and where they still hold considerable property.

They were during the Commonwealth presented with the Manor of Norton Canes, and are afterwards represented in Plot’s Map of Staffordshire as seated at Norton Hall. Within the last two hundred years the valuable manor of Norton has three times been lost and three times recovered; it was on the last occasion repurchased by William Hanbury, Esq., the uncle of the present owner. Ham is an addition.