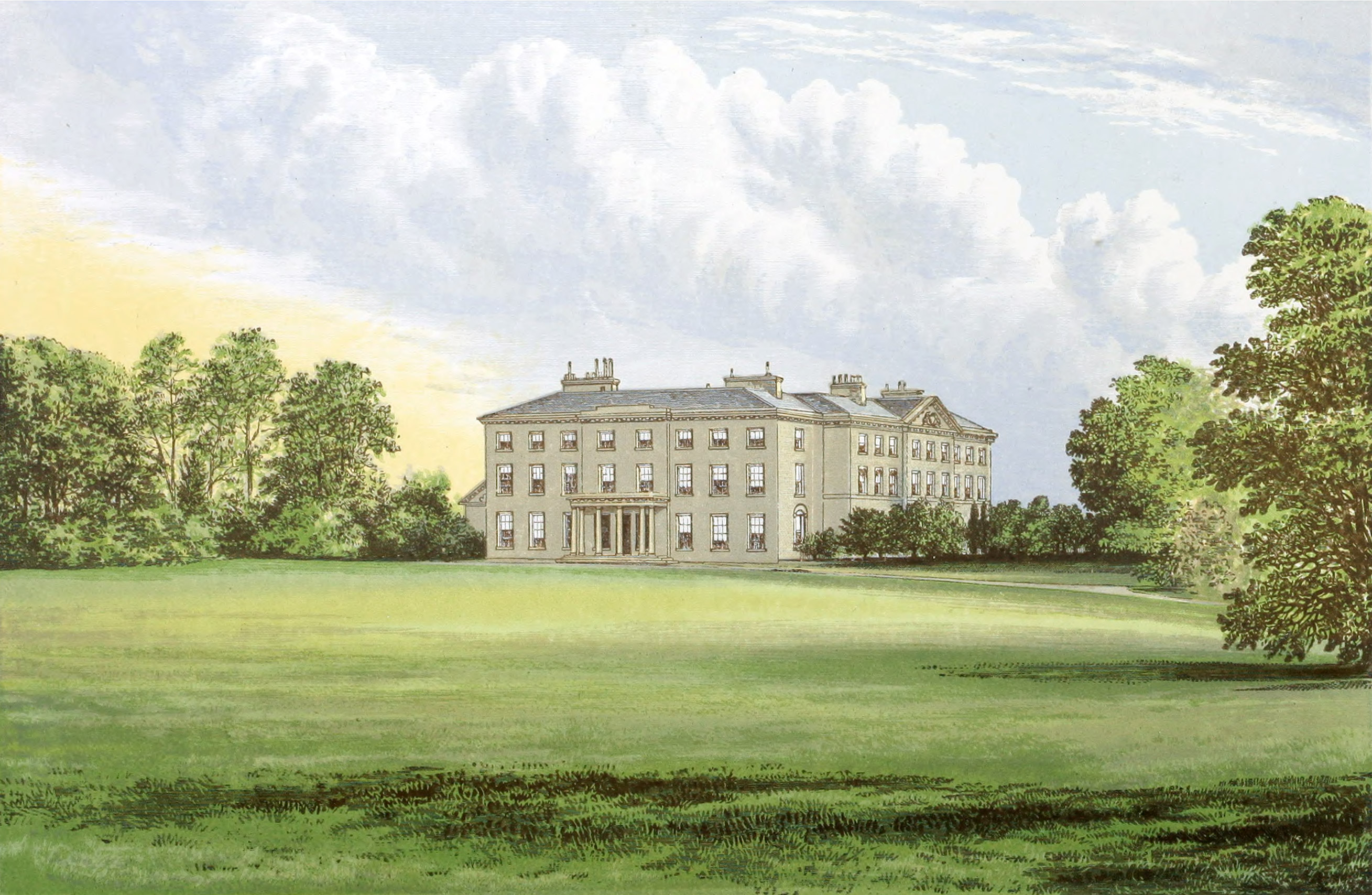 The only drawback that I have experienced in placing before my readers these views of English Homes and Home Scenery, the great ornaments of the country, which, as they have so often and so much pleased myself, and still please even in thus recalling, will, it is hoped, give somewhat of the like pleasure to others, is, that only one view of each country seat can be given, when an almost unlimited variety might as well, or almost equally as well, be represented. How much this remark applies to the one at present before us, may readily be understood from the fact that it stands in grounds, the various drives through which extend to no less than twenty-six miles, the demesne itself richly planted and of an undulating character, and containing four lakes, with a range of mountains in the distance, extending from Florence Court, the seat of the Earl of Enniskillen, away towards Sligo. The deer park contains three hundred head of deer. The woods are planted with fine beech trees, said to be the first planted in Ireland: and one of them, Derigid Wood, dating from 1642, is said to be the finest oak wood in that kingdom.

The estate was granted by King James I. to Sir Richard Waldron, of Leicestershire, who married Miss Farnham of the same county, and gave her name to the property, and it was purchased shortly after 1641 by Robert Maxwell, Bishop of Kilmore, lineal ancestor of the present Lord Farnham, and the immediate successor of the celebrated Bishop Bedell.

It contains a very valuable and extensive library in all departments of literature, with illustrated works, prints, and drawings.

The Museum has a splendid collection of minerals and geological specimens, as also antiquities from Pompeii, Herculaneum, and the ancient Etruscan cities, Roman cameos, Mosaics, and a large variety of other articles of vertu.

The hothouses, greenhouses, and conservatory are rich in the rarest varieties of exotic and other plants.

Among the valuable collection of paintings are the following:—The Miracle of the Loaves and Fishes, by Tintoretto; The “Washing the Disciples’ Feet, by Tintoretto; A Pilgrim in the Desert, by Guercino; Barry, second Earl of Farnham, by Opie; Robert, first Earl of Farnham, by Slaughter, Sergeant Painter to George II.; The Honourable Mrs. Maxwell, sister to Lord Oriel, (better known as Mr. Foster, Speaker of the Irish House of Commons,) with her eldest son, John, fifth Lord Farnham, by Angelica Kauffinann; Two Landscapes, by Zuccherelli; Autumn, by Clinchet;* Winter, by Clinchet;* View from the Cassina at Florence, by Burzi; View of the Piazza Granduca at Florence, by Burzi; Summer, by Clinchet;* Spring, by Clinchet;* Young Man and Girl Laughing, by Midler, of Munich; A Nun taking the Veil, by Bruls; View of the Bay of Naples, by Marinoni; Miniatures on ivory of Martin Luther and his wife, Catherine de Bora, in an ancient carved wood frame; Two Cattle pieces, by Verboeckhoven; View of Amalfi and the Gulf of Salerno, in oil, by Thoming; The Blue Cave, on copper, by Thoming; Italian Woman and Child, by Maes; Adoration of the Magi, on glass, by Bassano; An Original Sketch, by Salvator Rosa; Fruit piece, by Bembi; The Madonna, an original of the school of Guido; Landscape, by Teniers; William III. on Horseback, in the Field of Battle, by Gaspar Netscher; A sketch, by Guardi; View of the Patriarchal Church of Castello, near Venice, by Guardi; View of the Church of Santa Maria della Salute, at Venice, by Guardi; View of the Piazetta, at Venice, by Guardi; View of the Doge’s Palace at Venice, by Guardi; Two Views of La Zuecca, by Guardi; Side View of the Church of SS. Giovanni e Paolo at Venice, by Guardi; View of the Church in “the Lagunes of Venice,” called “La Barcetta,” by Guardi; View of the Court of the Doge’s Palace at Venice, by Guardi; Portrait of William III., by Gaspar Netscher; Helena Forman, the second wife of Rubens, by Rubens; Landscape, by Gaspar Poussin; Copy of the celebrated Marina of Claude Lorraine, in the Galleria degli Uffiz, Florence, by Signorini: this Copy, from its intrinsic merit, received the premium at Florence, among all the exhibited works of living artists, (being dealt with as an original,) the year before Lord Farnham purchased it. John the Baptist with a Lamb, by Jordaens; Landscape, by Gaspar Poussin; An Angel, by Guido Reni; Snow Piece, by Molenaer; The Annunciation, by Carlo Maratti; Landscape, with a Man watering Horses, by Wouvermans; An ancient Copy of the “Madonna della Seggiola,” of Raphael, by Ciniani; Landscape, of the School of Salvator Rosa; Three of the Apostles, painted on copper, of the School of Salvator Rosa; Landscape, by Zuccherelli; A Holy Family, by Solimena; Two Landscapes, with Figures, by Bout and Boudwyne; The Sick Lady, by Gaspar Netscher; Landscape, with Cattle, by Zuccherelli; St. John the Evangelist, by Carlo Dolce; View of Amalfi and the Gulf of Salerno, by Thoming; St. Cecilia, by Domenichino; View of the Bay of Naples, by Thöming.

There are besides a large number of very beautiful and valuable paintings and drawings in colour by foreign and other modern artists.

The family of Lord Farnham derives from the second son of Sir John Maxwell, of Caldervvood, in Scotland, who went over to Ireland in the interest of King James VI. of that kingdom. His Lordship is also thirteenth in descent from King Henry VII. through the houses of Brandon, Seymour, Boyle, and Butler.

* These four pictures of “The Seasons,” by Clinchet, formed part of the Strawberry Hill Collection, and were presented by the French Ambassador at Rome to Horace Walpole when a youth.