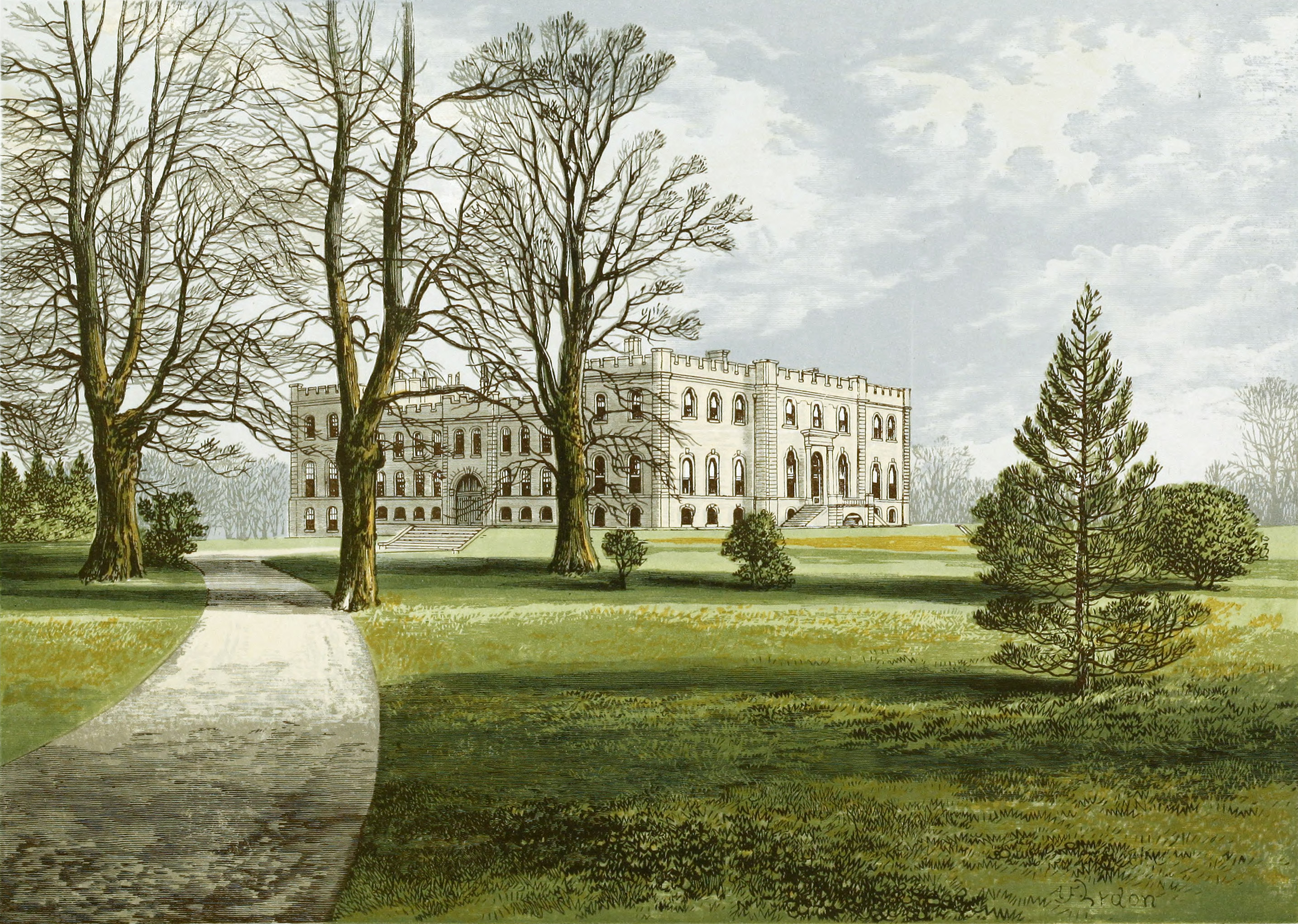 “The east side of the county,” says Cudd, “is adorned with the castle of Kinnibantum, now Kimbolton, anciently the seat of the Mandevilles, afterwards of the Bohuns and StafFords, and now of the Wingfields/^ Sir Richard Wingfield, K.G., twelfth son of Sir John Wingfield, of Letheringham, in Suffolk^ Knight, and Chancellor of the Duchy of Lancaster, married, first, Katharine, daughter of Richard, Earl Rivers, and widow of Henry Stafford, Duke of Buckingham, after whose attainder he obtained a grant of Kimbolton Castle and Lordship from Henry the Eighth, with whom he was highly in favour. He dying whilst Ambassador in Spain, was buried at Toledo, and his son. Sir James, sold Kimbolton to Sir Henry Montagu, afterwards first Earl of Manchester, whose lineal descendant, the present Duke of Manchester, is now owner.

Kimbolton Castle, the seat of the Earls and Dukes of Manchester, is of unknown but very remote origin. “The Castle,” says Leland, “is double diked, and the building of it metely strong: it longed to the Mandevilles, Erles of Essex. Sir Richard Wing- field built new fair lodgyns and galleries upon the old foundation of the castle. There is a plotte now clene desolated not a mile by west from Kimbolton, called Castle Hill,. where appear ditches and tokens of old buildings.” This Castle was the jointure and became the retirement of Queen Catharine after her divorce from Henry the Eighth. Henry, first Earl of Manchester, expended large sums in making it a comfortable residence; and Robert, his grandson, the third Earl, made further and very considerable alterations and many additions.

Thomas Montagu, Gentleman, who lies buried at Hemington, in Northamptonshire, was father of

Sir Edward Montagu, the immediate ancestor of the Earls and Dukes of Manchester. He was born in Brigstock, in that county. In 1547, he was one of the commissioners of claim at the young king’s coronation. On the accession of Queen Mary, he was dismissed from his oflB.ce of Judge, and imprisoned in the Tower, for his concern in the settlement of the crown upon Lady Jane Grey. He died in February, 1556–7, and was succeeded by his eldest son.

Sir Edward Montagu, who was knighted by Queen Elizabeth in 1567, and died in January, 1601. His successor was his third surviving son,

Sir Henry Montagu, the purchaser of Kimbolton, who, like his grandfather, was bred to the law in the Middle Temple, and became one of its chief luminaries. After various promotions, he was advanced to the dignity of Lord High Treasurer by- King James the First, in December, 1620. About a fortnight afterwards he was created a Baron, by the title of Lord Montagu of Kimbolton and Viscount Mandeville. In February, 1626, he was advanced to the dignity of Earl of Manchester. He died in November, 1642. His eldest son,

Edward Montagu, succeeded to the title and estates. This was the celebrated Parliamentary General, who was afterwards Chamberlain to King Charles the Second. His eldest son, by the second of his five wives, by whom alone he had issue,

Robert Montagu, succeeded him. He had been one of the six Lords, members of the House of Commons, deputed to wait on Prince Charles at the Hague, and invito him to return to the government of the kingdom. He died at Montpelier, in France, in May, 1683, but was brought to England, and interred near his father at Kimbolton. His eldest surviving son,

Charles Montagu, fourth Earl, and first Duke of Manchester, “had the advantages of education, both at the University of Cambridge and abroad; and being early distinguished for a manly behaviour and polite address, was appointed carver to the Queen at the coronation of King James the Second. Not approving, however, of the measures of that reign, he retired from court; and at the Revolution, secui-ed Huntingdon- shire for the Prince of Orange, by raising a body of horse, whilst the Prince was landing. He assisted at the coronation of King William; and in 1690 accompanied him to Ireland, where he was present at the battle of the Boyne, and at the siege of Limerick. In 1696 he was appointed Ambassador Extraordinary to the Republic of Venice, but had no further employment during the reign of Queen Anne. On the accession of George the First he was made one of the Gentlemen of His Majesty’s Bedchamber, and finally, in consideration of his great services, created first Duke of Manchester in April, 1719. He died in January, 1721–2, and was succeeded by his eldest son,

William Montagu, second Duke, born in France in 1700, during his father’s embassy. He bore the Golden Spurs for the Earl of Essex at the coronation of George the Second, and in 1737 was constituted Captain of the Yeomen of the Guard. He died (sine prole) at Bath, October, 1739, and was succeeded by his brother,

Robert Montagu, third Duke, who was Vice-Chamberlain both to Queen Caroline and the ruling Sovereign. He died in May, 1762, and was succeeded by his eldest son,

George Montagu, fourth Duke, on whose decease, in September, 1788, his eldest son,

William Montagu, fifth Duke, succeeded to the family honours and possessions. About the commencement of the present century, he was appointed Governor of Jamaica. His son and successor was