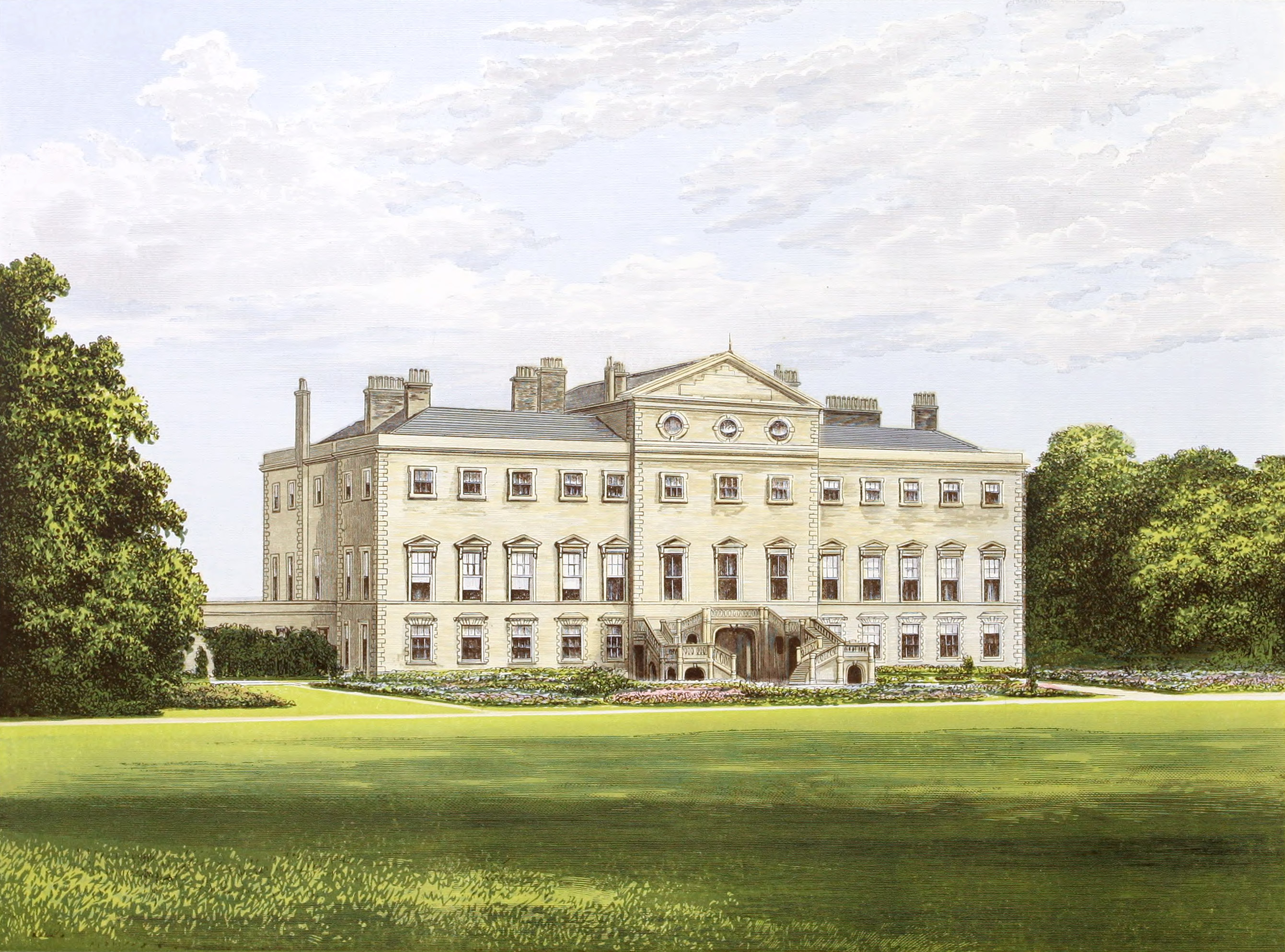 Lathom belonged at the time of the Domesday Survey to Orm, a Saxon, from whom the parish of Ormskirk—Orrn’s Church—derived its name.

His descendants took the name of Lathom from the place, and held it till the eventual heiress, Isabella de Lathom, married Sir John Stanley, in whose family it remained for several hundred years. In the end, the daughter and coheiress of the ninth Earl of Derby, Henrietta, Lady Ashbumham, sold it to Henry Furness, Esq., from whom it was purchased, in 1724, by Sir Thomas Bootle, of Melling, Chancellor to the Prince of Wales, as stated below, by whom the present magnificent house was re-built. It stands in the centre of a noble park between three and four miles in circumference.

Sir Richard de Wilbdrgham, Lord of Wymincham, was High Sheriff of Cheshire in the 43rd. of Henry III. His second wife was Letitia, second daughter and co- heiress of Sir William Venables, of Wymincham. He died in the 2nd. of Edward I. His son,

William de Wilburgham, died in the 26th. of Edward the Third, and was succeeded by his son.

Ralph de Wilbukgham, of Radnor, who married to his first wife Felicia, daughter of John de Hulme, and had a son, his successor,

Thomas de Wilburgham, of Radnor, aged twenty-two or upwards at the time of his father’s decease in L388. He married Margery, daughter of Thomas de Leighes, and dying in the 11th. of Henry IV., was succeeded by his son,

Thomas de Wilburgham, of Radnor, who married Margaret, daughter and heiress of John Golborne, Lord of Woodhey. By this lady he had six sons, of whom the second was

Ralph Wilbraham, Esq., living in the reign of King Henry the Eighth, who married Elizabeth, daughter of — Sandford, of the county of Lancaster. The second of his three sons,

Richard Wilbraham, Esq., of Nantwich, boru in 1528, was married, first, to Elizn, daughter of Thomas Maisterson, Esq., of that place, and secondly, to Margaret, widow of Alexander Elerch, Esq. He died in 1612. His eldest son,

Richard Wilbraham, Esq., Barrister at Law, and Common Sergeant of the City of London, married, in 1584, Elizabeth, daughter of Sir Thomas Puleston, Lord Mayor of London, and dying in the lifetime of his father, his son succeeded,

Thomas Wilbraham, Esq., of Nantwich, who married, in 1619, Rachel, daughter and sole heiress of Joshua Clive, Esq., of Huxley, and had, with other issue, his successor at his decease,

Randle Wilbraham, Esq., of Nantwich, who served the office of High Sheriff of Cheshire in 1714. He married Mary, daughter of Sir Richard Brooke, Bart., of Norton. Their second son,

Randle Wilbraham, Esq., LL.D., of Rode Hall, Deputy High Steward of the University of Oxford, and M.P., married Dorothy, only daughter of Andrew Kenrick, Esq., of Chester, and was succeeded by his only surviving son,

Richard Wilbraham, Esq., of Rode Hall, M.P. for Chester, who married Mary, daughter and sole heiress of Robert Bootle, Esq., of Lathom House, and assumed that additional sirname, under the will of his wife’s uncle, Sir Thomas Bootle, Knight, Chancellor to H.R.H. Frederick Prince of Wales. Of this marriage, the eldest son,

Edward Bootle-Wilbraham, second Lord Skelmersdale, of Skelmersdale, in the County Palatine of Lancaster, P.C., and a Lord in Waiting on Queen Victoria, married Alice, second daughter of the Earl of Clarendon, and had, with other issue,