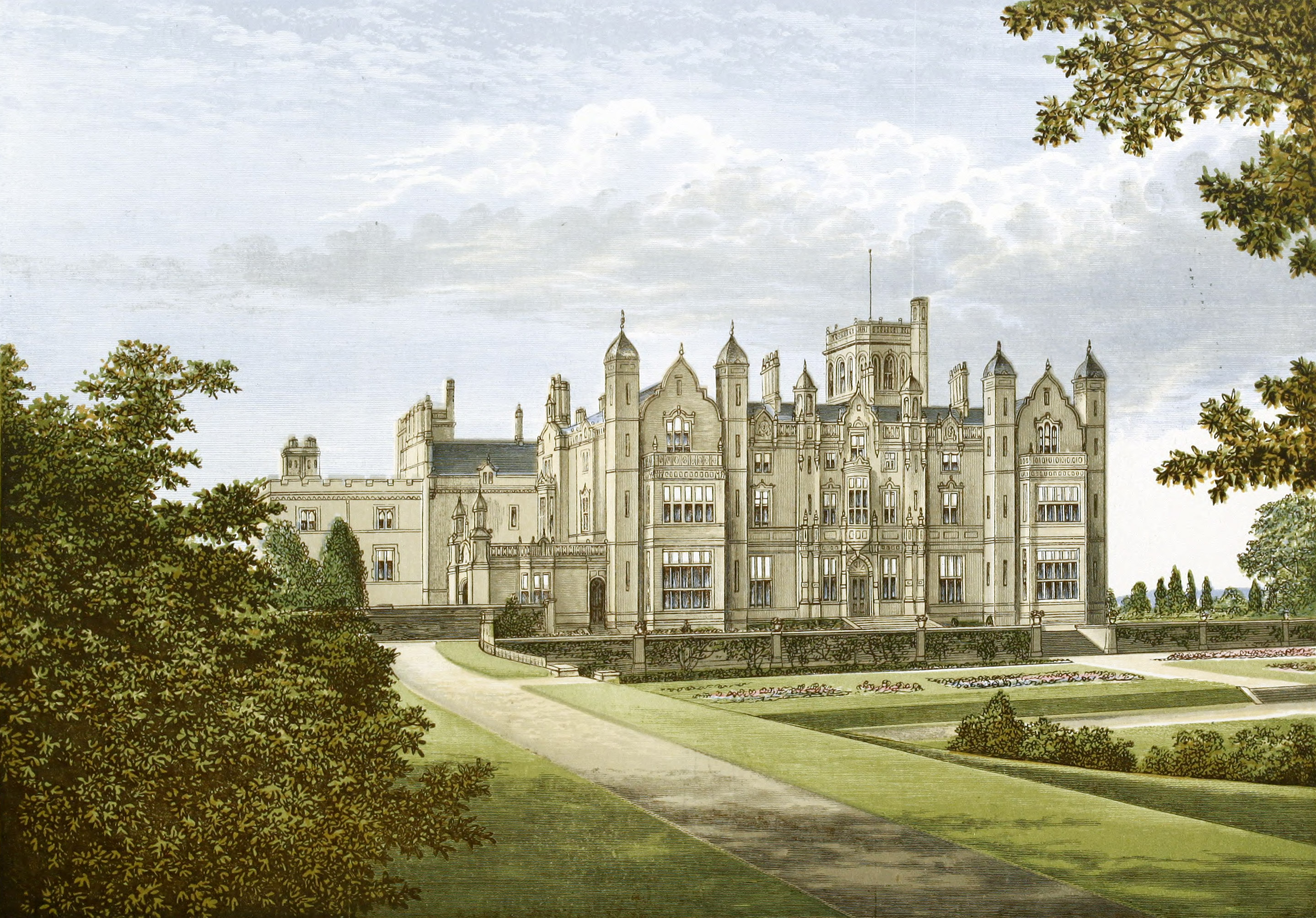 Merevale Hall, near Atherstone, stands on the borders of Warwickshire and Leicestershire, about a mile distant from the town. It is finely situated on the edge of a wooded eminence.

The entrance is to the west, and on the south and east is a beautiful suite of spacious apartments with high Elizabethan and bay windows, opening on a terraced garden in the Italian style, facing the park. At the north-east corner of the mansion is a lofty tower, which is seen to great advantage from all the surrounding neigh- bourhood. The views from it are extremely fine, and embrace a vast extent of country. In clear weather places and objects can be seen forty miles off.

The park, beautifully undulated with hill and dale, is adorned with some of the finest oaks in the kingdom, many of which reach to the height of one hundred feet and upwards, and are evidently relics of the ancient Forest of Arden, which extended all over North Warwickshire. It is also well stocked with deer, and has a noble lake.

The present house was built in the year 1840, by the celebrated architect Blore, on the site of a former mansion of brick. The style is florid Elizabethan, and the south- east front is justly considered one of the architect’s masterpieces. The interior is very handsomely decorated, and the rooms lofty and well arranged. There is a small but well-selected collection of pictures by the old masters, among which is one of the finest Cuyps in England. There is also a large library, comprising many valuable works, and among them the entire library of the antiquary Sir William Dagdale, from whom the owners of the property have descended through an heiress.

To the north of the house, at about the distance of half a mile, in the grounds, stands the parish church, which is very ancient and curious. It was formerly the pilgrim’s chapel, belonging to the monastery. It contains some fine old stained-glass windows, among other good specimens being a very fine 14th. century east window, which has been lately restored. There are also here some monumental figures of the Ferrers family, the founders of the abbey.

The only remains of the monastic buildings are the walls of the refectory and a part of the south wall of the conventual church, the foundations of which have been lately excavated. The church was found to have been two hundred and twenty feet in length.

At the Dissolution of tlie Monasteries tlie abbey passed into tlie family of Devereux. It- next went into tbat of Stratford, with which it continued until it was conveyed in marriage by an heiress to the Dugdales of Blythe Hall.

A monastery of the Cistercian Order was founded at Merevale by Robert, Earl Ferrers, in the thirteenth year of the reign of King Stephen. This monastery was largely endowed by the founder, and was favoured by many benefactions in after periods. At the Dissolution the revenues were stated at £254 1s. 8d. per annum. The abbot and monks received pensions during life. Considerable fragments of the building still linger, as above stated, in a progressive and picturesque state of decay.

This ancient family is now represented as follows:—

Sir William Dugdale, Knight, the celebrated antiquary and genealogist, author of the well-known Dugdale’s “Monasticon,” was father of

Richard Geast, Esq., of Handsworth, and their elder son and heir,

Richard Geast, Esq., Barrister-at-law, by his marriage, in 1767, with Penelope Bate, eldest daughter and co-heiress of Francis Stratford, Esq., of Merevale,, (—he assumed, in 1799, the additional surname and arms of Dugdale—) had, with three daughters, a son,

Dugdale Stratford Dugdale, Esq., of Merevale, born in 1773, M.P. for Warwickshire from 1802 to 1830, who married the Hodcurable Charlotte Curzon, daughter of Assheton Curzon, first Viscount Curzon, and had by her an only son,

William Stratford Dugdale, Esq., of Merevale and Blythe Hall, J.P. and D.L., and some time M.P. for North Warwickshire, who married Harriet Ella, daughter of Edward Berkeley Portman, Esq., of Bryanston, in the county of Dorset, and sister of Lord Portman, and had several children, the eldest son being

The paternal descent of the present family is from

John Geste, of Handsworth, a holder of copyhold lands there, 12th. Henry VII, grandfather of

Edmund Geast, Bishop of Salisbury, who was followed by

Nicholas Geast, Esq., of Handsworth, who by his wife Phœbe, daughter of — Downing, was father of the above-named

Richard Geast, Esq., of Handsworth, progenitor, as above shown, of the existing owner of Merevale.