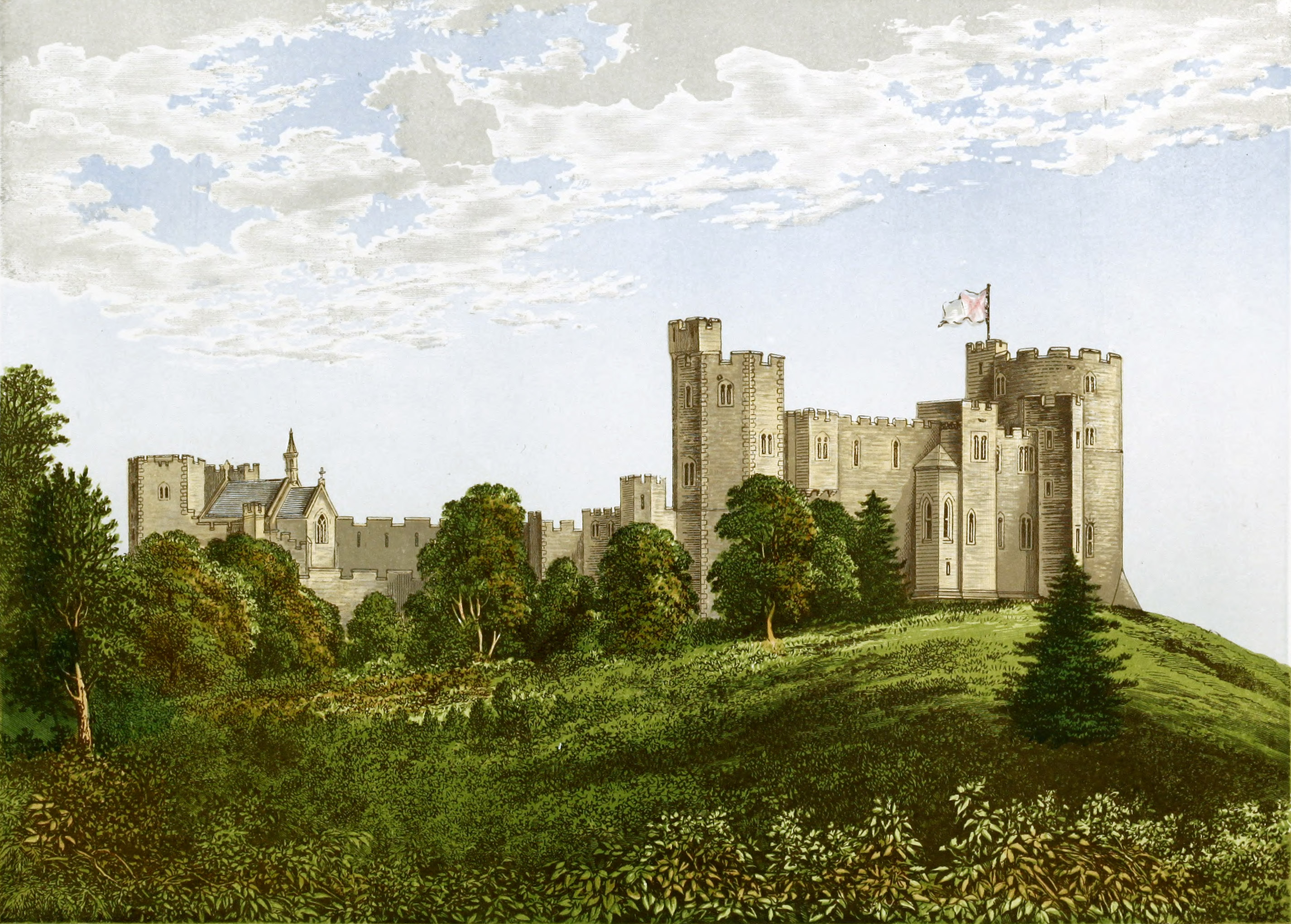 In 1840, the greater portion of Peckforton township, with Beeston Castle and the township of Beeston (a small part of which already belonged to the Wilbraham estate) were purchased by Mr. Tollemache from the Mostyn family.

About the year 1844 Peckforton Castle was commenced, and completed in 1850,

A. Salvin, Esq., being the architect.

“This very ancient family of Tollemache claims Saxon descent, and the name is said to be a corruption of the word “tollmack,” tolling of the bell; the Tollemaches having flourished with the greatest honour, in the county of Suffolk, since the first arrival of the Saxons in England, a period more than thirteen centuries.

Tollemache, Lord of Bentley in Suffolk, and Stoke Tollemache in the county of Oxford, lived in the ninth century, and upon the old manor house at Bentley appeared the following inscription:—

“Before the Normans into England came,
Bentley was my seat, and Tollemache was my name.”

Sir Hugh de Tollemache, living in the reign of King Edward the First. After him came

Sir Lionel Tollemache, living in the reigns of Henry the Sixth and Edward the Fourth.

Lionel Tollemache, Sheriff of Norfolk and Suffolk in 1512.

Sir Lionel Tollmache, High Sheriff of Norfolk and Suffolk in 1567. Queen Elizabeth honoured him with her presence at Helmingham.

Sir Lionel Tollemache, created a Baronet on the institution of the order. May 22nd., 1611.

Sir Lionel Tollemache, M.P. for Oxford in the reigns of James the First and Charles the First.

Sir Lionel Tollemache, who married Lady Elizabeth Murray, eldest daughter and co-heiress of William Murray, First Earl of Dysart and Lord Huntingtower. At her husband’s decease she became Countess of Dysart, and obtained, from King Charles the Second, a confirmation of her honours with the right to nominate any of her children she pleased as her heir. Her eldest son by her first marriage, as above, (she married, secondly, John, Duke of Lauderdale, K.G.,) was

Sir Lionel Tollemache, Lord Huntingtower, M.P. for Oxford in 1678 and 1685, who then became second Earl of Dysart. His son was

Sir Lionel Tollemache, K.T., third Earl of Dysart, who had fifteen children, of whom the eldest to survive was

Sir Lionel Tollemache, fourth Earl of Dysart, who dying without issue, February 22nd., 1799, was succeeded by his brother.

Sir Wilbraham Tollemache, fifth Earl, Lord High Steward of Ipswich. He died March 9th., 1821, but having no issue, the title went to his sister, Louisa, Countess of Dysart, born in 1745, who then conveyed it, by her previous marriage in 1765, to John Manners, Esq., of Grantham Grange, in Lincolnshire, whose son took the name and inherited the title.

Jane Tollemache, married, October 23rd., 1771, John Delap Halliday, Esq., of the Leasowes, in Shropshire, who took the name of Tollemache, and had four children, of whom the eldest,

John Tollemache, Admiral R.N., married Lady Elizabeth Stratford, daughter of John, third Earl of Aldborough. The Admiral succeeded under the will of his grandfather, Lionel, third Earl of Dysart, who left the Cheshire, and ultimately the Suffolk estates, to the second branch of the family. In 1837 the Admiral was succeeded by his eldest son,