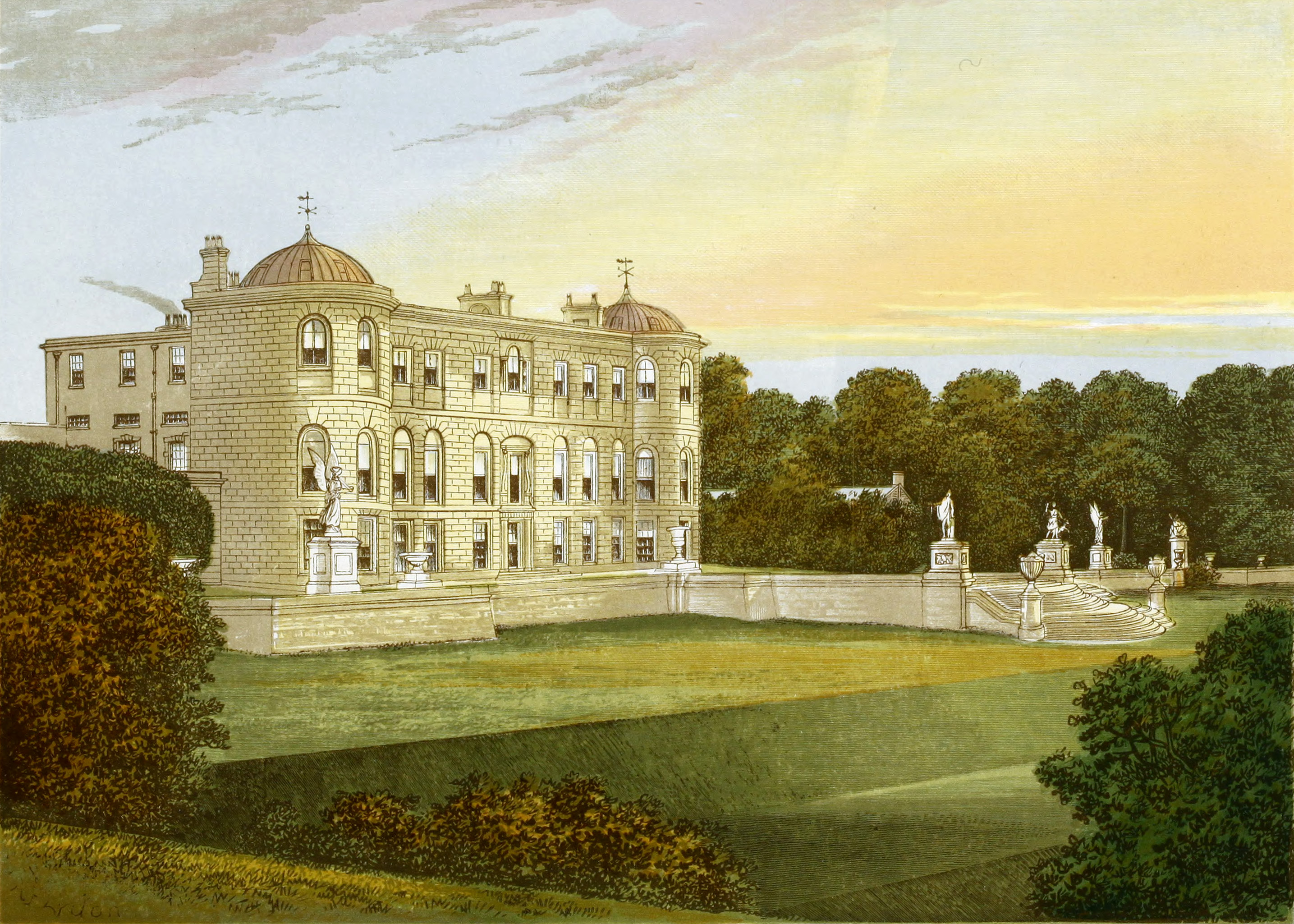 Near Enniskerry, County of Wicklow.—Viscount Powerscourt.

Powerscourt, distant from Bray about four miles, is approaclied by a handsome arched gateway of granite, and an avenue of beech trees about a mile long, overlooking the valley of the River Dargle, the name of which is a corruption of the Celtic “Dah-glen,” the “Valley of the Oaks,” from the ancient forest, the remains of which still exist in the deer park.

The house, built of granite about 1730, presents a Grecian fagade to the north or entrance front, with a central block and wings, terminated by gateways and obelisks surmounted by eagles. The south front overlooks the terraces and the view across the valley to the “Great Sugar-loaf,” called in Irish “The Silver Spear,” a conical mountain somewhat resembling Vesuvius in form, one thousand six hundred and fifty feet above the sea, the cone of which is of granite, piercing through the overlying strata of clay-slate.

The view from the mansion is of great beauty, embracing a panorama of the Wicklow mountains, and a richly wooded landscape, sloping down to the river.

The house stands upon the sight of the ancient castle of the O’Tooles, and the estate was granted by Queen Elizabeth to Sir Richard Wingfield, Marshal of Ireland, created first Viscount Powerscourt, for services rendered to the Crown in subduing the lawless Septs that inhabited this district during her reign.

The house is entered in the north front by a large but low entrance hall, filled with armour and stags’ heads, whence the principal staircase leads to the saloon, which is over the entrance hall, both being of the same dimensions, sixty feet by forty. The saloon, however, runs up to the roof of the house, two stories high, and is forty feet in height. The upper part of it has two galleries, supported by Ionic columns, and it is lighted from these galleries, which communicate with the bedroom floor.

Groups of statuary are placed between the columns, and the floor is of chesnut wood. In this saloon King George IV. was entertained at a banquet by the present Viscount’s grandfather, on the occasion of his visit to Ireland in 1821. The chimneypiece is modern, designed by Pegrazzi of Verona, from one in the Doge’s Palace at Venice; and the bronze fire-dogs, fender, etc., came from a palace there, and are attributed to John of Bologna.

There is a curious old harpsichord in this room, exhibited at South Kensington in 1872, dated 1612, and painted inside and out by Vandermeulen with subjects taken from the sieges of various towns in the wars of Louis the Fourteenth. It is also marked as having been restored by Pascal Taskin, in 1774, and it was purchased from the Bankers Torlonia at Rome, in 1841, as having belonged to Marie Antoinette, by the present Yiscount’s father.

The two drawing-rooms open from the saloon, on the south front of the house, and contain pictures by Rembrandt, Titian, Tintoretto, Guercino, etc.

Below the drawing-rooms, on the ground floor, are the dining-room, morning room, and library. The dining-room contains pictures principally of the modern French and Belgian schools, by Rosa Bonheur, Corot, Achenbach, etc. In the morning room are two interesting pictures, one of Marshal Sir Richard Wingfield, first Viscount Powerscourt, and one of his uncle Sir Anthony Wingfield, K.G. This latter picture is mentioned in the Letters of the Honourable Horace Walpole (Lord Orford), Letter XXVIH. to Richard Bentley, Esq. The story told about the picture (painted by Holbein) was that the housekeeper, in showing the house at Letheringham, in SuSblk, used to say that Sir Anthony had had his thumb cut oQ” for striking some one in the king’s presence. The picture shows the thumb tucked into the girdle, and the housekeeper probably invented the story, to account for the thumb being hidden by the girdle. The story, however, is sufficient to identify the picture, which was purchased by Frederick, fourth Marquis of Londonderry, at the sale of Mr. Dawson Turner’s pictures at Messrs. Christie and Manson’s in 1852, and given to the present Viscount, his step-son. The other pictures in this room are also family portraits. The terraces on the south front, commenced in 1842, were designed by Mr. Daniel Robertson, from the plan of the Villa Butera, in Sicily. The upper terrace, of granite, is about three hundred yards long, opening at the west end into the gardens, and is ornamented with marble statues and vases. Below this is a second terrace, formed in grass slopes, with a central flight of steps, and an alcove in granite, decorated with bronze vases and two cinque-cento bronze Tritons, spouting water into a basin. These two figures came from the collection of Prince Jerome Napoleon Bonaparte, and were sold by him after the burning of the Palais Royal, in Paris, by the Communists in 1870. They formerly belonged to the palace of the Duke de Litta at Milan.

The surrounding grounds are planted with choice coniferous and other trees and shrubs. The deer park is a deep glen, containing the highest waterfall in the British Islands. The surrounding woods are the remains of the original self-sown oak forest which anciently covered a great portion of this part of Ireland.

The family of Wingfield, from which Lord Powerscourt descends, is described by Camden as “famous for their knighthood and ancient nobility,’^ and stated to have been settled at Wingfield, in the county of Suffolk, before the Conquest. The senior line became extinct, but the junior derives from

Sir Robert Wingfield, Knight of the Holy Sepulchre, greatly distinguished in the civil wars in Ireland, over which country he was appointed Marshal by Queen Elizabeth in 1600, which office was confirmed to him by James the First.