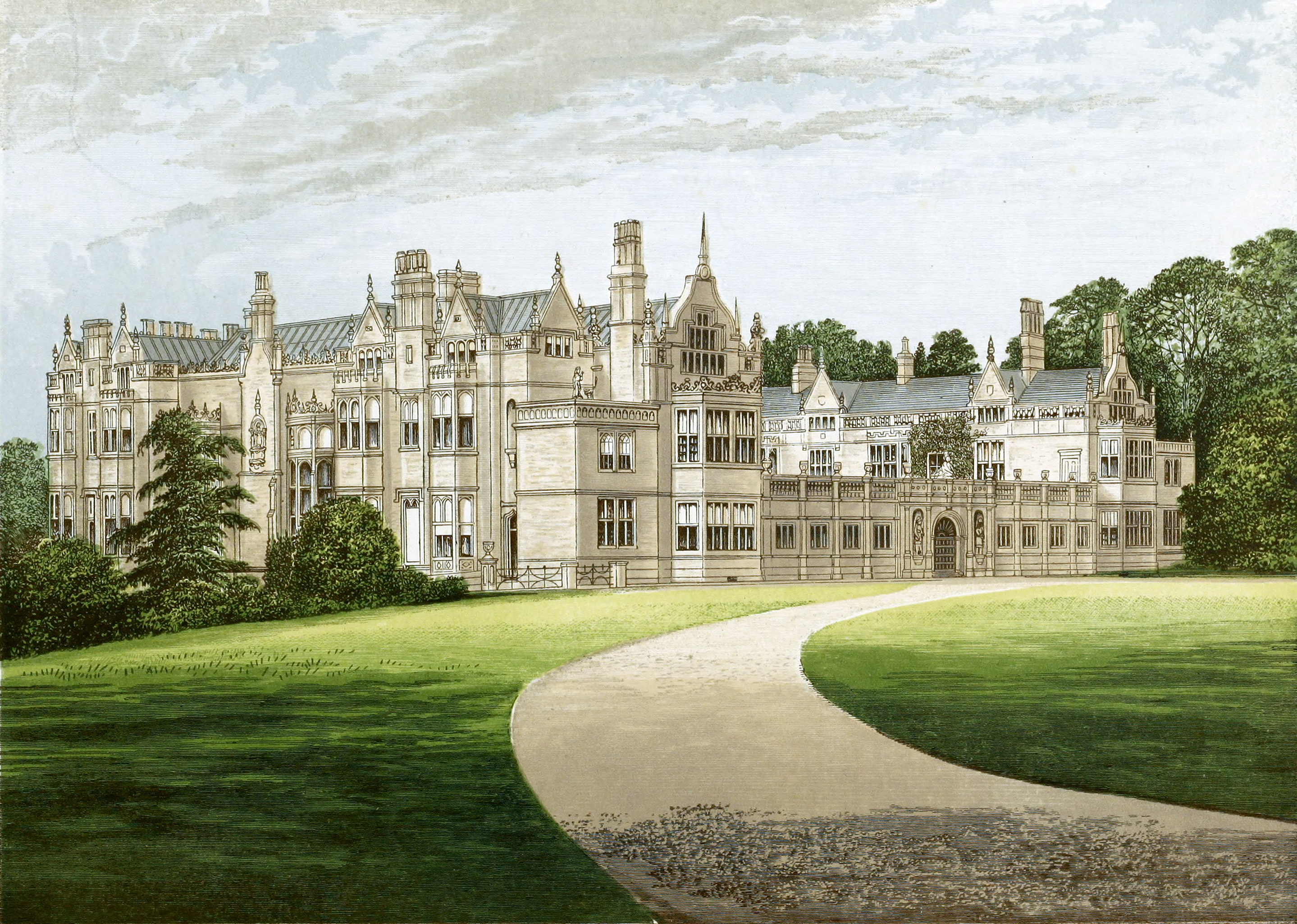 Rushton Hall was commenced by Sir Thomas Tresliam about 1527, but apparently was not finished for some few years afterwards, there being later dates on portions of the building.

The house surrounds three sides of a quadrangle, having upon the front a fine Doric screen.

Francis Tresham, whose estates were forfeited to the crown on account of the part he took in the Gunpowder Plot.

Rushton then passed into the hands of

Sir William Cockayne, in whose family it remained till 1823.

Miss Thornhill, and at her death went to her husband,

There is a curious building in the grounds of Rushton, about half a mile from

the Hall, called the Triangular Lodge, built by Sir Thomas Tresham in 1595. It is very rich in architectural beauty, and is supposed to have been one of the places of meeting for the conspirators in the Gunpowder Plot.

I copy the following description of some of the features of the house from Sir Bernard Burke’s work:—

“The great hall occupies the south side of the court. It is a spacious room, lighted by mullioned windows, and having a highly ornamented roof that runs up to the entire height of the edifice. The rafters rise with a lofty pitch, connected about the centre of each by tie-beams, and formed into an enormous arch by com- passed timbers, springing from the walls. The spandrils are filled with open tracery, every member having an appropriate enrichment, no less light than bold and imposing. At the bottom of the hall is a Doric screen of six engaged columns on pedestals, having two arches of entrance from the parlour, kitchen, battery, etc. Over the entablature of the screen are statues of the Four Cardinal Virtues, with the figure

of Charity in the centre. The great gallery, extending to one hundred and twenty- five feet, occupies the whole length of the north wing. It is panelled with oak, and contains the pedigree of the Cockaynes, somewhat defaced by the inroads of time, but still highly curious and interesting. One room bears the name of the Duke’s Chamber, from the tradition of its having been inhabited by the Duke of Monmouth when he was concealed at Rushton by Elizabeth (daughter of Sir Francis Trentham) the second Viscountess Cullen, and one of the beauties at the Court of Charles 11. But the most curious, as well as the most ancient part of the building, is a small oratory leading from the great staircase containing a representation, in basso relievo, of the Crucifixiou, composed of numerous characters, with a Latin inscription in gold characters.

A peculiar interest attaches to that portion of the grounds called the wilderness. It is there that Dryden is said to have composed his poem of ‘The Hind and Panther;’ and it perhaps acquires a yet deeper significance from the fact that the alcove, built amongst its thickets, commands a distant view of Nasehy Field. The circumstance is thus recorded upon a tablet in the alcove by Dr. Bennett, late Bishop of Cloyne:—

It was in a summer house at Newton—belonging to another branch of the Tresham family—that the framers of the Gunpowder Plot used to concoct their plans.”

William Capel Clarke (Thornhill,) Esq., J.P., and Captain in the Third Regiment of Fusiliers, assumed the additional surname of Thornhill in consequence of his marriage with Miss Clara Thornhill, daughter and coheiress of Thomas Thornhill, Esq., of Fixby Hall and Riddleworth Hall, in Yorkshire, and had, with other issue,