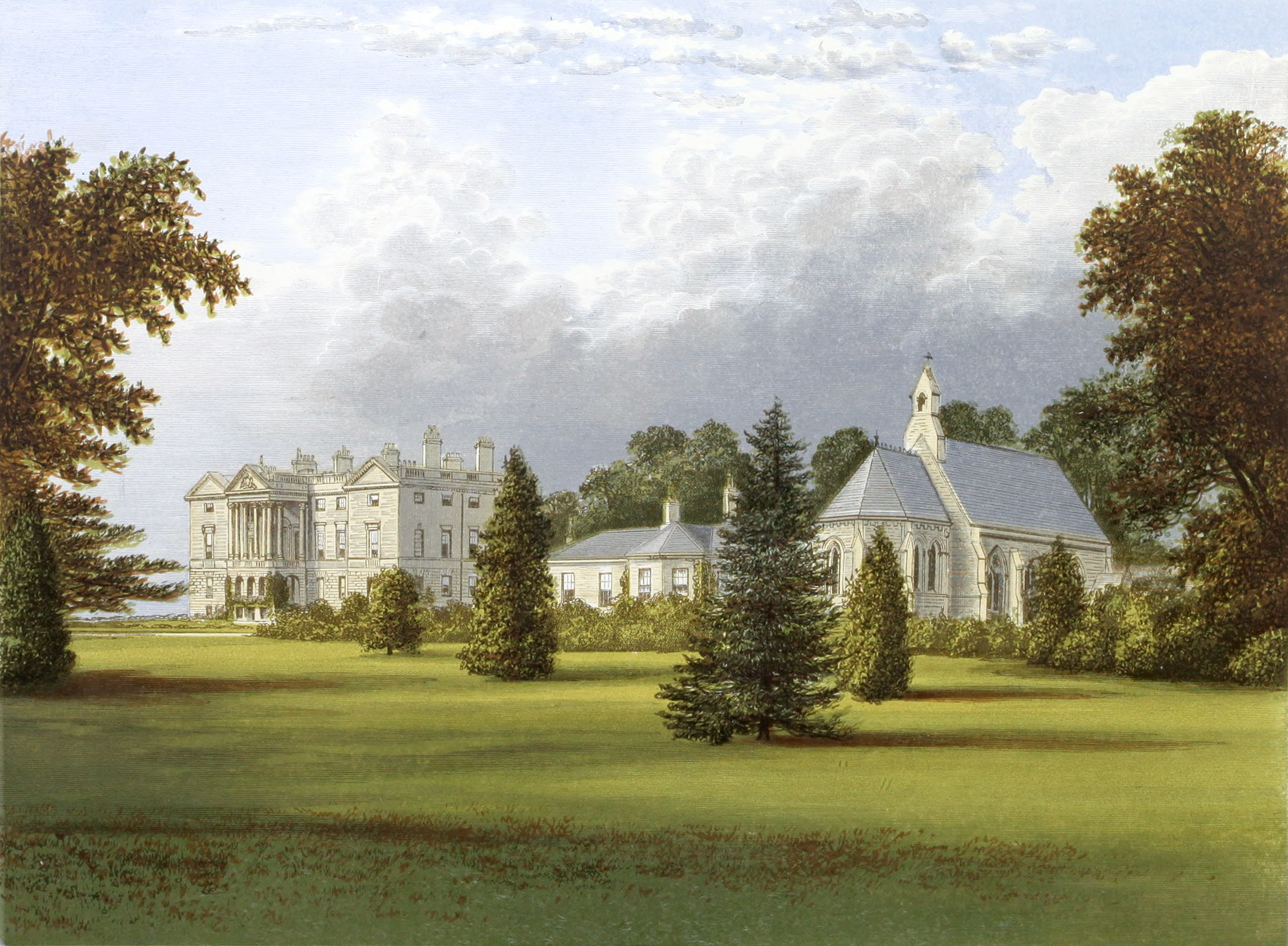 Near Tickhill, Yorkshire.—Earl of Scarborough.

The situation of Sandbeck Park is very pleasant, quiet, and retired, and the “tout ensemble” of a thoroughly English character. A large herd of deer roam through a spacious park adorned with stately trees of ancient growth, while on one side is a large lake, and on another the elegant spire of Laughton-en-le-Morthen Church at no great distance comes into view. A handsome private chapel adjoins the house.

Osbert de Lumley, of Lumley, in the Bishopric of Durham, was father of

Liulph de Lumley, who married Algetha, daughter of Alfred, Earl of Northumberland. Their son was

Uchtred de Lumley, from whom descended

Roger de Lumley, who married Sybill, daughter and coheiress of Hugh de Morewic, a feudal Baron of Northumberland, and was succeeded by his son,

Sir Robert de Lumley, who married Lucia, one of the three sisters and coheiresses of William, Robert, and Thomas de Thweng, Barons Thweng, and his son,

Robert de Lumley, who died unmarried and a minor in the forty-eighth year of the reign of Edward III., and was accordingly followed by his brother,

Sir Ralph de Lumley, Knight, Deputy-Governor of Berwick-on-Tweed in the fifteenth year of Richard II., and summoned to Parliament from 1384 to 1399. He however joined in the rebellion of Thomas de Holland, Earl of Kent, was attainted, and died on the field of battle. He had married Eleanor, daughter of John, Lord Nevil of Raby, and the eldest of his four sons,

Thomas de Lumley, who died in 1404, and was succeeded by his brother,

Sir John de Lumley, Lord Lumley, who was actively engaged in the French wars of Henry IV. and Henry V., and was slain at the battle of Beauge, in Anjou, April 13th., 1421, and his only son,

Thomas de Lumley, obtained from Parliament in 1461 a reversal of the attainder,

and was summoned as a Baron from 1461 to 1497, in which year he is supposed to have died. He married Margaret, daughter of Sir James Harrington. Their only son,

Sir George Lumley, Sheriff of Northumberland in the second year of Edward IV., married Elizabeth, daughter and heiress of Roger Thornton, Esq., the wealthy merchant of Newcastle-on-Tyne. His lordship’s eldest son, Thomas Lumley, predeceasing him, he was succeeded, in the twenty-third year of Henry VII., by his grandson,

George Lumlet, Lord Lumley, who being implicated in the treason of Lord Darcy, Sir Thomas Percy, and others, was committed to the Tower, and executed. He married Jane, coheiress of Sir Richard Knightley, and his successor,

John Lumley, Lord Lumley, was restored in blood by Act of Parliament in 1547. He married twice, but having no children, and the reversal of the attainder not having applied to his father, the Barony expired, but the estates went to his kinsman,

Sir Richard Lumley, Knight, who was raised to the Peerage of Ireland, July 12th., 1628, as Viscount Lumley, of Waterford. He fought under Prince Rupert for Charles I., and married Frances, daughter of Henry Shelley, Esq., of Worminghurst Park, in Sussex, and having had a son, the Honourable John Lumley, who died vitâ patris, was succeeded by his grandson,

Richard Lumley, second Viscount Lumley, who was ennobled in the Peerage of England, May 31st., 1681, as Baron Lumley, of Lumley Castle, and further, April 10th., 1689, Viscount Lumley, and, April 15th., 1690, Earl of Scarborough. He was in command at the Battle of Sedgemoor, when the unfortunate Duke of Monmouth was defeated. His Lordship married Frances, only daughter and heiress of Sir Henry Jones, of Aston, Oxfordshire, and dying in 1721, was succeeded by his eldest son,

Richard Lumley, second Earl of Scarborough, K.G., at whose decease, unmarried, in 1740, the honours devolved on his brother,

Thomas Lumley, third Earl of Scarborough, who assumed the additional surname of Saunderson, by Act of Parliament, in 1723. He married Frances, daughter of George, Earl of Orkney, and dying in 1752, was succeeded by his eldest son,

Richard Lumley, sixth Earl of Scarborough, born April 16th., 1757, who married, May 25th., 1787, Harriett, daughter of Henry, fifth Lord Middleton, and he also dying without children, was succeeded by his next brother,

The Rev. John Lumley, seventh Earl of Scarborough, Prebendary of York, born in 1761. He assumed, under the will of his maternal uncle, the surname of Savile, and married, in 1785, Anna Maria, daughter of Julian Herring, Esq., and left at his death, February 25th., 1835, with other children,

John Lumley, eighth Earl of Scarborough, Lord Lieutenant and Custos Rotulorum of Nottinghamshire, born July 18th., 1788, who died unmarried October 29th., 1856, when the inheritance devolved on his cousin (grandnephew of the fourth Earl),