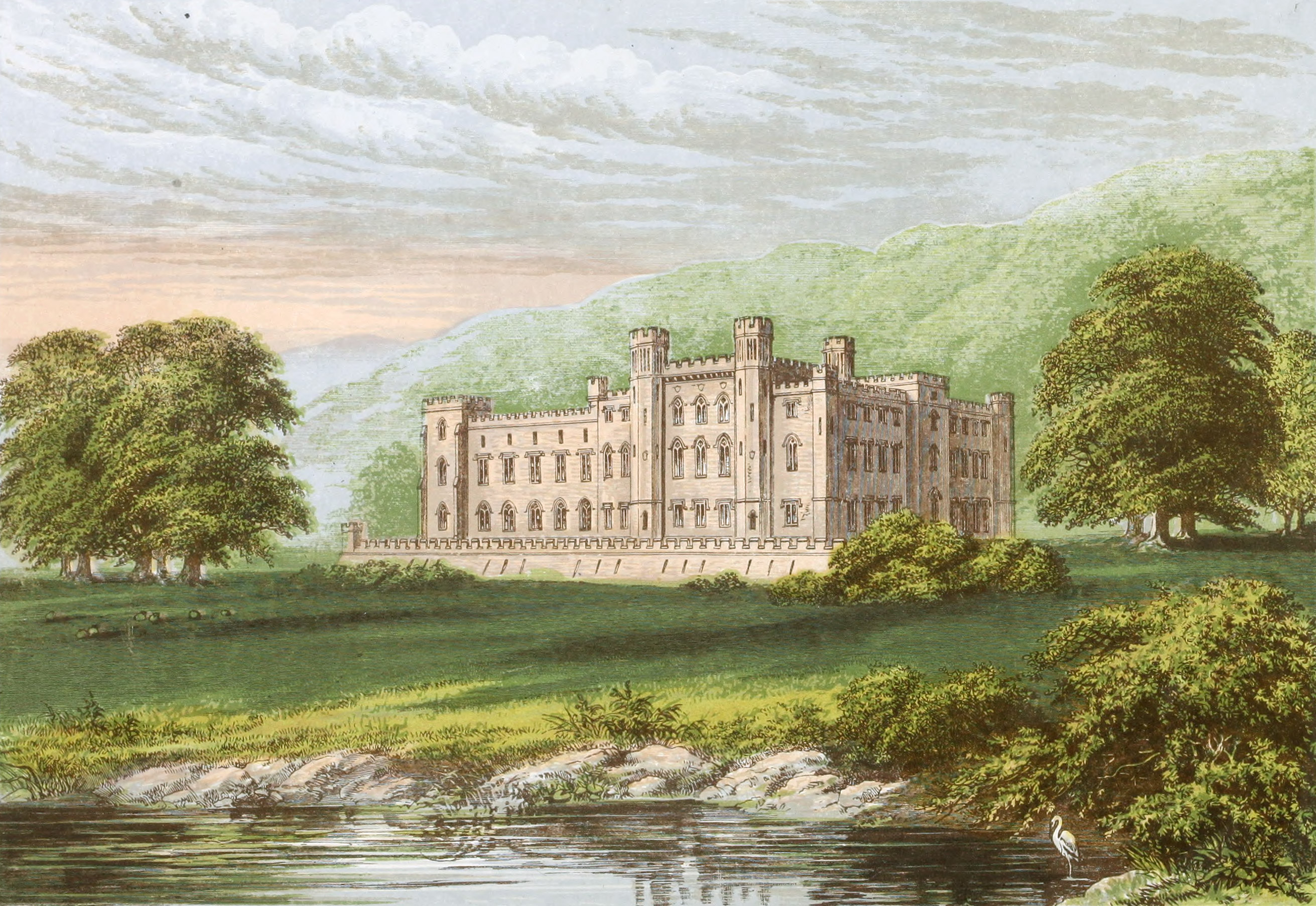 Near Perth, Perthshire.—Earl of Mansfield.

Scone Palace, it need scarcely be here stated, was in ancient times a favourite residence of the kings of Scotland, and the celebrated stone on which they sat when crowned, was carried fron Scone by Edward the First, and is now placed in the coronation chair in Westminster Abbey. This stone is stated by Sir James Ware to have been first brought to Ireland by the colony of the Inath de Danans, and thence removed to Scotland when Fergus, the first king of Scotland, who was descended from the blood royal of Ireland, was crowned on it.

The situation of this seat is extremely beautiful, the Tay flowing at the edge of the park in view of the windows, while on the opposite side is the rich scenery about Perth, and on the right the Grampian Hills bound the distant view.

The palace and the abbey were both dilapidated under Henry the Eighth, but the former was restored in the early part of the seventeenth century, and here King Charles the Second was crowned in the year 1651, ten years before the ceremony was again performed in Westminster. Here also the Pretender, the Chevalier St. George, was crowned in 1715.

In the year 1803, the old palace was removed by the then Earl of Mansfield, and in its stead he erected the present mansion, which was completed in 1806. It is two hundred and twenty feet long, and the sides are one hundred and thirty on the north and the south.

The rooms are very fine, and contain many curiosities and paintings, and among the latter portraits of King Charles the Martyr, by Vandyke; the Marquis of Montrose; Lord Mansfield, the great lawyer, by Sir Joshua Reynolds; also his successor, and the next Earl and Countess, by Sir Thomas Lawrence.

In the state bedroom is a bed presented by King George the Third to the then Earl. It is of crimson damask, with the full arms of Britain embroidered in gold at the head and the top. In an adjoining room is a bed in which Queen Mary slept, the hangings worked by herself while a prisoner in Lochleven Castle; in another one which her son, James the Sixth of Scotland and First of England, used. In these apartments there are several curious portraits of members of the Royal House of Stuart.

In the cloisters, between the gallery and the corridor, are full-length portraits of George the Third and Queen Charlotte, by Bamsay, and some ancient coats-of-arms, carved in stone and built into the wall.

There are in all in Scone Palace one hundred and twenty-five rooms, and it is stated that of these ninety are bedrooms.

In the library is the woolsack on which the Lord Chief Justice Mansfield used to sit in the House of Lords. He was born in Scone Castle in the year 1705, and died in 1793, in his eighty-ninth year.

The family of the Earl of Mansfield, who holds the hereditary feofeeship of the Palace of Scone, derives from Sir William Murray, of Tullibardine, who died in 1511.