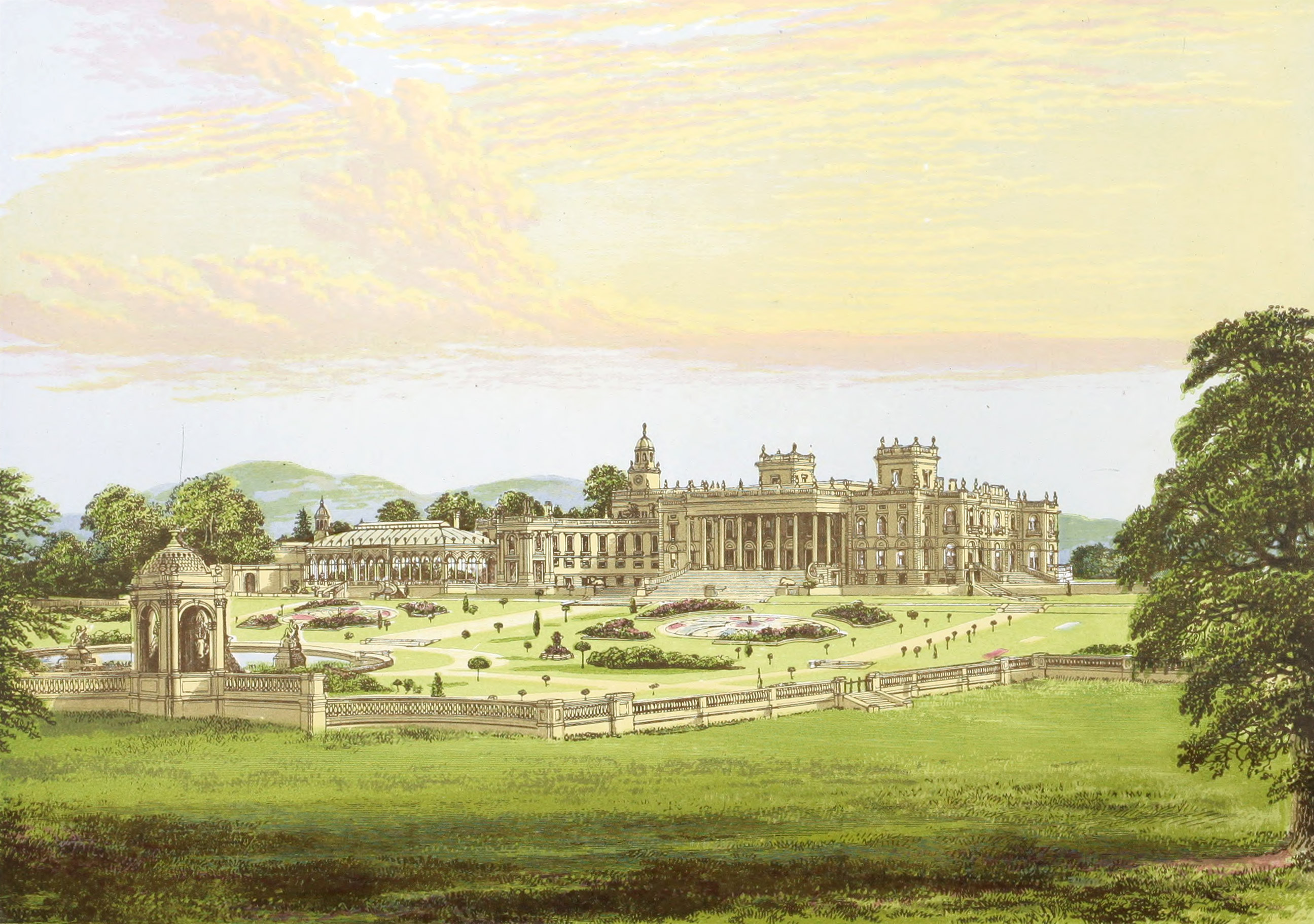 Near Droitwich, Worcestershire.—Earl of Dudley.

Whitley or Witley Court, for the word is spelled both ways, was also in more ancient times written Whittlege, Whittleg, and Veceloge. At one time it belonged to the Cookseys, an old family of the county of Worcester, and was carried from them, through an heiress of the estate, into that of the Russells of Strensham.

From them it was purchased by Thomas Foley, Esq., of whom Nash, the historian of Worcestershire, observes, “This family is a striking instance what great riches may be acquired in a trading county by integrity, industry, frugality, and an extensive trade, and this within four generations. Bishop Fleetwood says, the law hath laid the foundation of two-thirds of all the honours and great estates in England: more than this proportion may be reckoned in Worcestershire. In all England there is no noble family, and very few opulent ones, that sprang from the church, except Lord Sandys. All our late war, glorious and successful as it was, hath not yet ennobled one soldier, (February, 1776.) Physick hardly ever raised its professors above knighthood or baronetage. Our county, besides a Foley, can shew a Knight, a Taylor, and others who have gained a more than ministerial fortune by the iron- trade, and attention to their own domestic affairs; while on the other hand, a Wild, a Tracey, a Lane, and many others, have spent large estates in elections and hunting for court favours.”

From the family of Lord Foley the place passed by sale to Lord Ward.

The parish church adjoins the house; and Sulivan, author of the “Tour through England,” writes thus of it in the second volume of that work. “The church, which is annexed to the house, is really an elegant building; the whole of it is beautified at a great expense; the sides white and gold, the ceiling divided into handsome compartments, with good Scripture pieces, and the glass windows exquisitely painted by an artist of the name of Price, who executed them in the year 1719. Uncommonly handsome as this edifice is, it still carries a disadvantage which those who are not uncommonly orthodox would dislike. It, unfortunately, is the parish church, so that the graves and tombstones are absolutely in the area of the house. This I mentioned to the old lady who conducted us through the apartments; but she, shaking her head, and staring at me with surprise, very calmly replied, that, if people are shocked at the sight of mortality, it is very easy for them to shut the windows.”

The old lady was right. If there are “sermons in stones,” as it has been well said that there are, even in those that we walk upon in every road, surely most of all in those which, whether speaking in the “storied urn and animated bust,” or in those more plain and homely ones which chronicle in every “Country Churchyard” where underneath the green turf the “rude forefathers of the hamlet sleep,” give one and the same lessou to all who survive but for a time, till their own turns shall come.

The family of Lord Dudley is derived from William Ward, a wealthy goldsmith of London, Jeweller to Henrietta, Queen of Charles I.