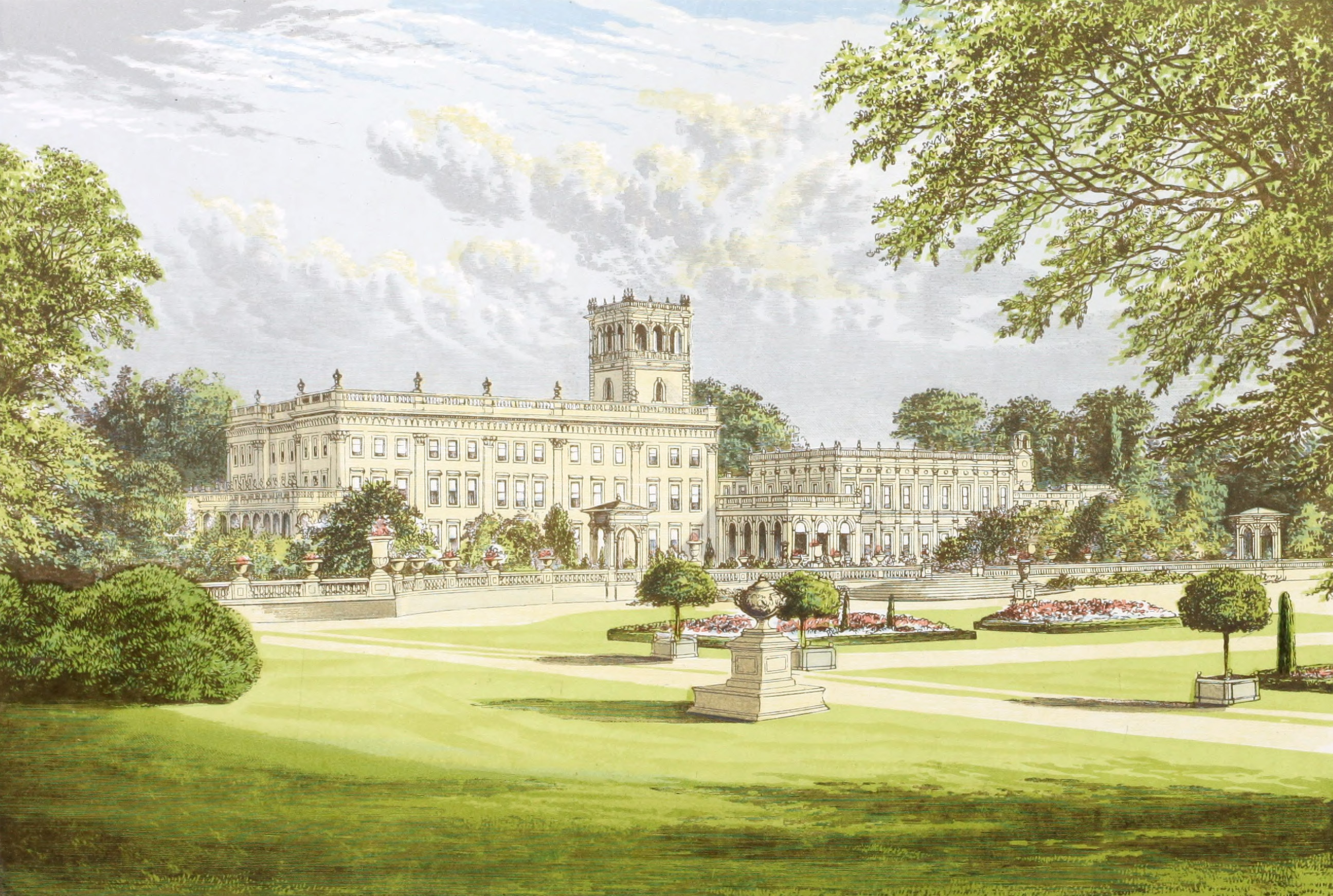 Near Newcastle-under-Lyme, Staffordshire.—Duke of Sutherland.

The silver Trent gives its name to this grand ducal residence, built as it is on the site of some house which in Saxon times stood upon its bank, and thence originated the word which now composes the second part of the title of the present mansion.

Trentham Hall is situated about four miles north-west of the town of Newcastle-under-Lyme, and about five in a nearly opposite direction from that of Stone.

The Trent winds through the park, and furnishes in perfection the feature without which no landscape is complete. In one part it is widened into a lake, of about eighty acres in extent. The higher hills above command beautiful and extensive views of the surrounding country.

The grounds in the immediate vicinity of the house were originally laid out by “Capability Brown,” and possessing in themselves the greatest natural advantages, have since had every embellishment and improvement that taste and wealth could add.

The apartments within the house are magnificent and spacious, and their walls are adorned with an extensive collection of paintings by ancient and modern artists.

The Church, which is an elegant building, is situated close to the house.

The park contains about five hundred acres of land, and is stocked with a fine herd of deer.

The pleasure grounds and gardens consist of about sixty-five acres. In one part stands the hollow trunk of an ancient yew tree, but still bearing several branches with leaves, supposed to have been planted about twelve hundred years since.

Between the churchyard and the hall there stood a Nunnery in former times, a portion of the wall of which still remains.

The estate of Trentham came into the possession of the family of the Duke of Sutherland through the marriage of Sir Thomas Gower with Frances, daughter and co-heiress of Sir John Leveson, Knight, of Lilleshall, Staffordshire, and Haling, in Kent, who bequeathed the whole of his extensive property to his nephew, Sir William Leveson Gower.

Trentham has had the honour of Royal visits from King George the Third in 1805, the Princess Victoria in 1832, and the Prince and Princess of Wales in 1866, and again in 1867.

The family of the Duke of Sutherland derives from Sir Allan Gower, Lord of Stittenham, in Yorkshire, at the time of the Conquest.

Upon the visit of George the Fourth to Scotland in 1822, it was determined by His Majesty that the right of carrying the sceptre before the King was vested in the Earls of Sutherland.