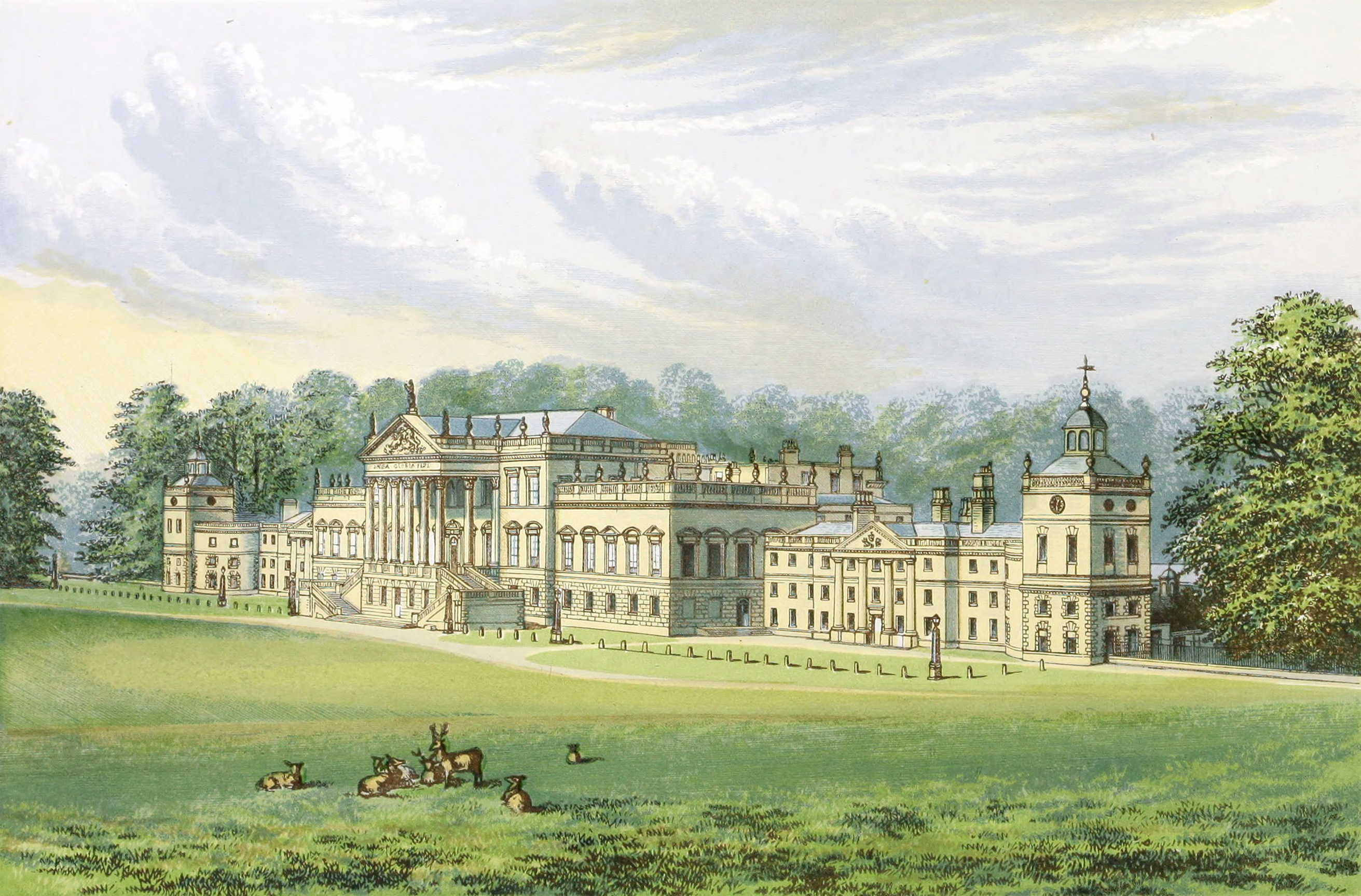 This grand seat of one of our greatest English families, is most beautifully situated in the West-Riding of Yorkshire, four miles from “Fair Rotherham,”—fair in the days of the “Dragon of Wantley,” but I fear me hardly deserving of the name now, for its smoke—nine from Sheffield, and thirteen from Doncaster.

I borrow a portion of the following brief description of it from the pen of my obliging friend, Sir Bernard Burke, who has most kindly placed his vast and elaborate stores at my disposal for the use of the present work.

Wentworth Woodhouse is a magnificent edifice, standing in the midst of a park that presents one of the most beautiful landscapes of the kind to be met with throughout the whole country. The building encloses three courts. The principal front, which was built by Thomas first Marquis of Rockingham, consists of a centre with two wings, extending in a line of more than six hundred feet. The great entrance is through a beautiful portico, sixty feet long and twenty feet wide, which is supported by six Corinthian columns upon pedestals, with a balustrade about the area. Three light figures surmount the pediment, and in the tympanum are the arms and supporters of the Marquis of Rockingham.

The great hall is sixty feet square, and forty feet in height, with an inlaid marble floor. A gallery ten feet in width is carried quite round it, being supported by eighteen fluted Ionic pillars, with bases and capitals of white marble, while the shafts are of sienna. In niches between the columns are marble statues. The roof over the gallery is upheld by Corinthian pilasters united by festoons. The ceiling is divided into ornamental compartments.

On the south side of this hall are some of the finest apartments of the building, namely,—the Ante-room, the Van Dyck Room, and the Drawing Room. On the north side are the Statue Room, the Dining Room, and the three Libraries, containing many valuable, works, some of which are inscribed with the name of the first Earl of Strafford. Beyond these rooms, looking into the garden, is the Picture Gallery, which is one hundred and twenty-eight feet long.

The Garden front is of a date anterior to the Park or Eastern Entrance, and some of the rooms remain much as they were in the days of Thomas Earl of Strafford.

The park contains fifteen hundred acres, the ground being beautifully varied with woods and water. The aid of architecture has also been called in to heighten the general effect of the landscape. On an eminence about a mile from the house is the Mausoleum, a beautiful building ninety feet high, erected in 1788 to the memory of Charles Marquis of Rockingham, by his nephew and successor, William fourth Earl Fitzwilliam.

The Private Chapel also contains several very valuable paintings. The Museum, too, has many valuable and interesting antiques.

The family may be traced up to Fitz-Godric, cousin to King Edward the Confessor.