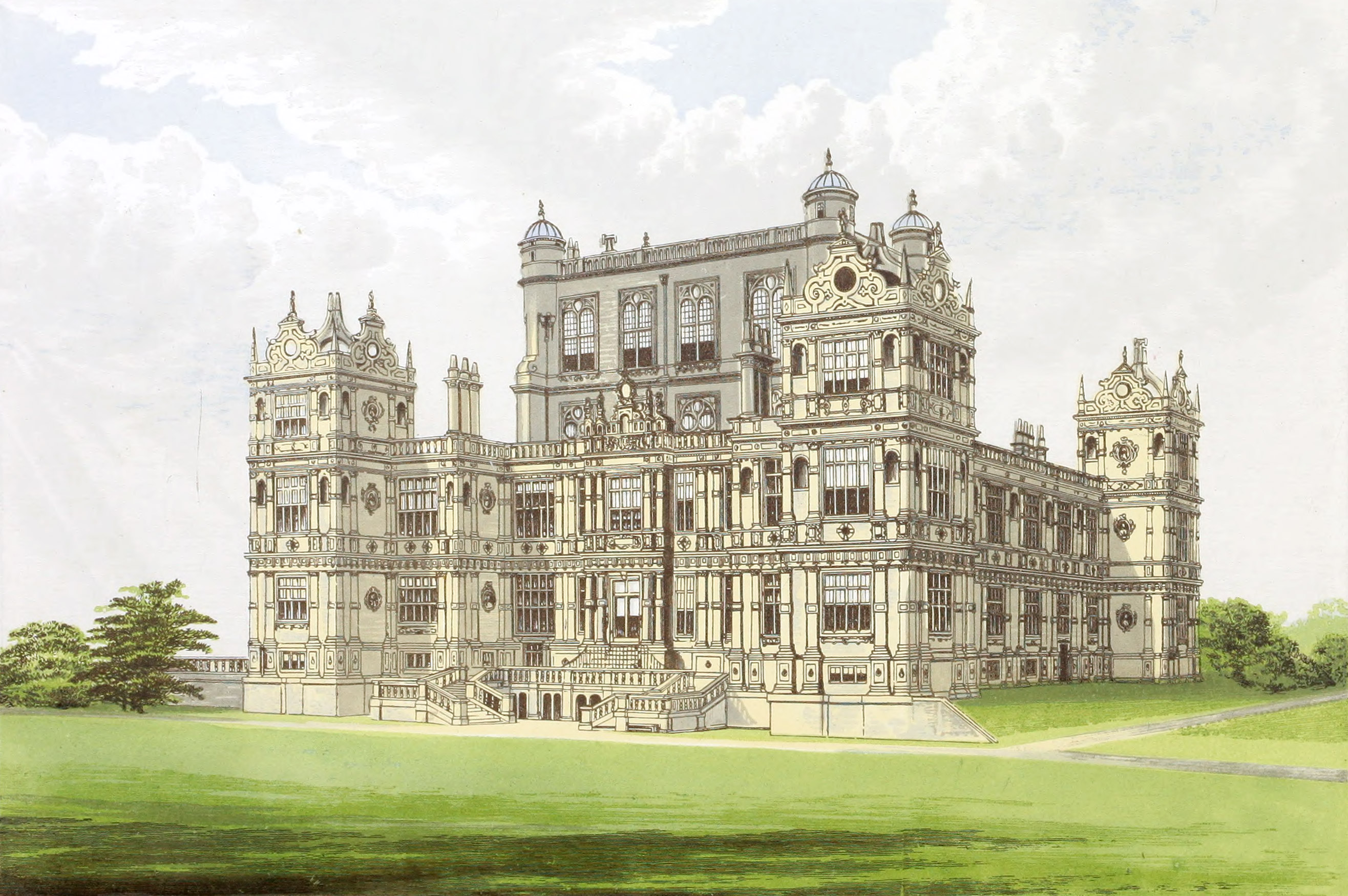 Wollaton Hall, a stately structure, is situated on a knoll near the River Trent, between two and three miles from Nottingham, and is approached by an avenue of noble lime trees nearly a mile in length.

It stands in an extensive park, amply wooded with ancient oaks and elms, and well stocked with deer, the ground undulated and adorned with sheets of water.

The house was built by Sir Francis Willoughby, who commenced the work in the year 1580 and completed it in 1588.

The library contains a valuable collection of books, as also the ancient Service Book of Wollaton Church, and portraits of Willughby the eminent naturalist, Ray his contemporary, and the sixth Lord Middleton.

In the hall are several fine pictures, and among them one of the famous navigator Hugh Willoughby, who was sent out on a voyage in the reign of King Edward the Sixth, with three ships, to discover the famous and fabulous Cathay. He set sail in the year 1553, and having spent some time in cruising in the northern regions, was forced about the middle of September to put in to a harbour of Lapland, where he and the whole of his crew were frozen to death.

The Rev. Prebendary Trollope thus writes of it:—”Great is the fame of this mansion as a specimen of English domestic architecture, and but few, if any, will hesitate to acknowledge the justice of its high reputation. Here there is much for all to admire, but perhaps still more for lovers of architecture to study. Externally, this fine old fabric consists of two entirely distinctive portions, namely, the great dominant central tower and the remainder of the composition. These, although built at the same time, or nearly so, 1580-8, differ entirely from each other in proportion, style, and ornamentation.”

“There is much dignified beauty about the principal front, with its double flight of balustraded steps leading to the door, for which the stately avenue leading to it has prepared the visitor; while the bold breaks of its facade ensure the valuable assistance of a sufficient amount of light and shade, which plays over its surface in varied masses when a sunny day smiles upon it, and its angle towers springing aloft, with their fretted gables and their obelisk pinnacles, lightly break the sky line in a charming manner. The garden front is of the same character, but instead of rising from a deer park, it has a stately terrace spread out before it, relieved by groups of fine evergreens and the lovely turf of an English lawn.”

The family of Lord Middleton descends from Sir Christopher Willoughby, K.B., living in the reign of King Henry the Seventh.