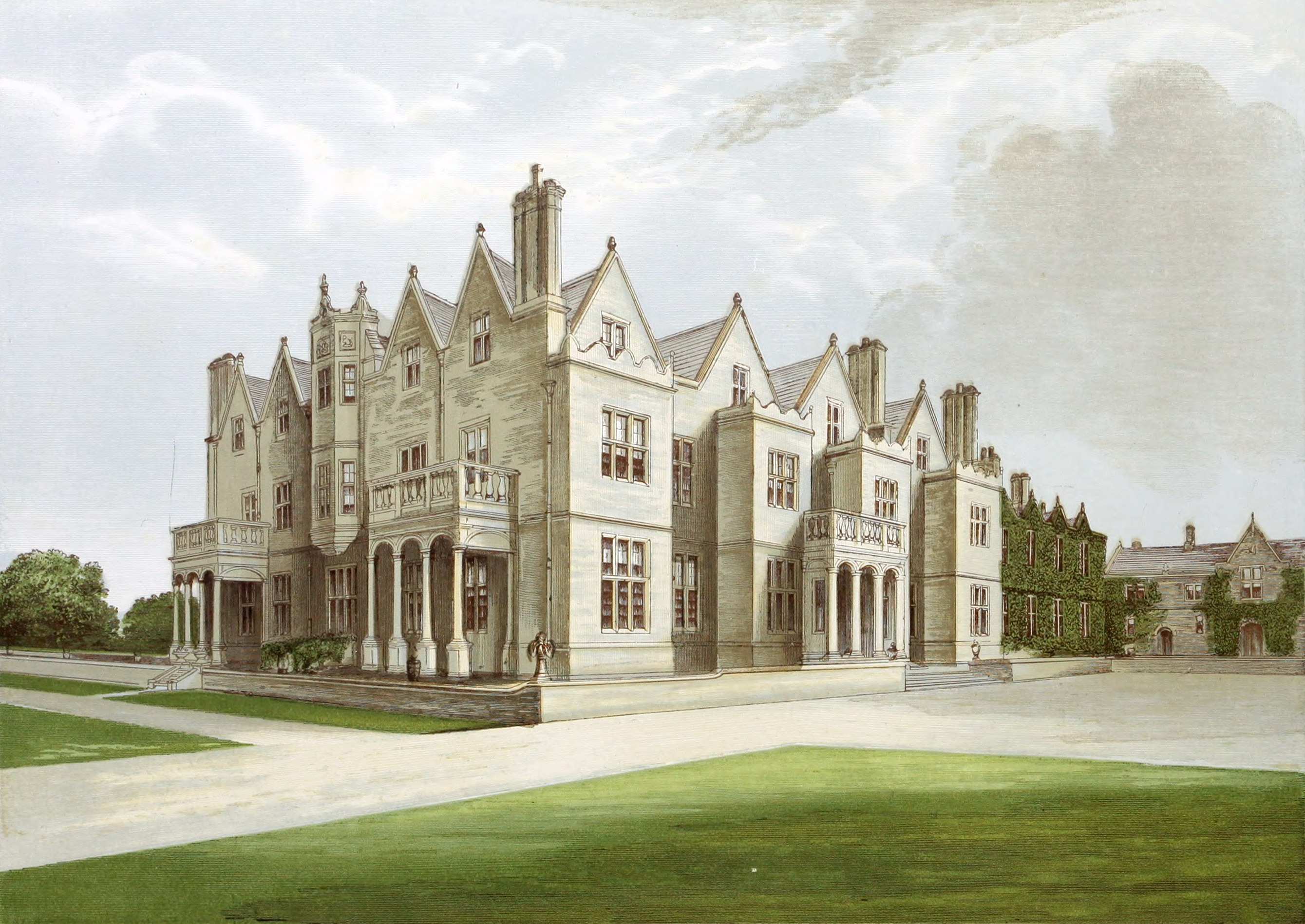 In Domesday Book this estate is given as belonging to one Rinaldus.

The family of Corbet removed to it when their ancient residence of Moreton Corbet Castle was destroyed by Cromwell’s soldiery about the year 1644.

It is built in the Elizabethan style, and stands on a gentle eminence sheltered from the north by a background of hills. It commands fine views over Shropshire to the Wrekin, taking in, in various directions, the Clee Hills, Lawley Hill, and Caradoc Hill, on the south and south-east; the Longmynd Hill, towards the south- west; the Montgomeryshire Hills on the west; and the Grins Hill on the north- west: a thoroughly English scene altogether.

This family is stated to be derived from

Hugh Corbet, or Corbeau, living in Normandy in 1040. The second of his four sons,

Roger Corbet, held, at the general survey, no fewer than twenty-four lordships in Shropshire. His son,

William de Corbet, of Caus Castle and Wattleborough, was father of

Thomas Corbet, was great grandfather of

Richard Corbet, of Moreton Corbet. Thirteenth in descent from him was

Sir Vincent Corbet, Knight, of Moreton Corbet, living in 1606, who married Frances, daughter and heiress of William Humfreston, Esq., and had two sons, the elder of whom,

Sir Andrew Corbet, Knight, of Moreton Corbet, married Elizabeth, daughter of William Boothby, Esq., and at his decease, in 1637, left two sons, of whom the younger,

Richard Corbet, Esq., of Shawbury, on inheriting the estates of his grand-nephew, Sir Vincent Corbet, Bart., in 1688, became of Moreton Corbet. He married Grace, daughter of Sir William Noel, of Kirkby Mallory, Leicestershire, and dying in 1690, was succeeded by his son,

Richard Corbet, of Moreton Corbet, who married Judith, daughter of Sir John Bridgeman, Bart., and was succeeded, in 1718, by his son,

Andrew Corbet, Esq., of Moreton Corbet. He wedded Frances, only daughter and heiress of William Prynce, Esq., of Shawbury, and dying in 1757, left, with other issue, an eldest son,

Andrew Corbet, Esq., of Moreton Corbet, born in 1720, and died unmarried in 1796. His brother inherited the estates,

Sir Andrew Vincent Corbet, Baronet, of Moreton Corbet, born June 15th., 1800, who married, September 19th., 1820, Rachel Stephens, daughter of Colonel John Hill, of Hardwicke, and had two sons, besides daughters. The elder son succeeded, at his death, in September, 1855, as