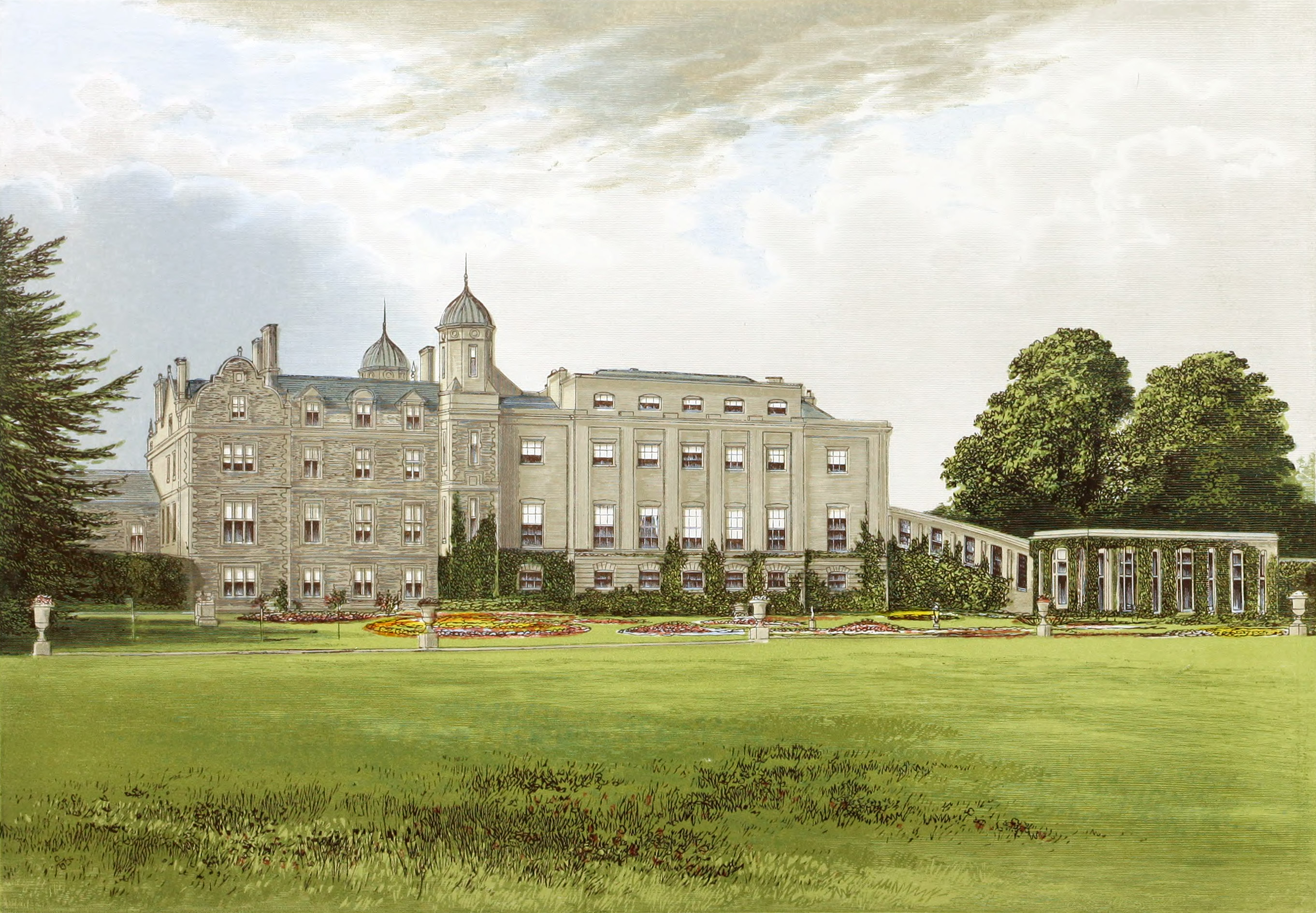 Near Ashford, Kent.—Earl of Winchelsea. (The Residence of His Royal Highness the Duke of Edinburgh).

The grounds of Eastwell Park, about four miles north-east of Ashford, are extremely beautiful and picturesque.

A noble mansion was erected here in 1546, towards the latter end of the reign of King Henry the Eighth, by the then owner. It was rebuilt by Mr. G. Finch-Hatton. The east window of the Parish Church contains some good painted glass, exhibiting the arms and badges of several distinguished characters. There is also a tomb with figures of Sir Moyle Finch and his wife, Elizabeth, Countess of Winchilsea, who died in 1633, and others of members of the Finch family.

“Tradition has handed down a story of one of the workmen employed in building this mansion having claimed to be the son of Richard the Third. His account of himself is considered unworthy of credit; it, however, prevailed with the kind- hearted proprietor to allow him a piece of ground, with a small pension, which he enjoyed till his death, about four years afterwards. In the parish register appears the following entry:—‘Richard Plantagenet was buried the 22nd. day of Dec, 1550;’ but the tomb, said to have been erected to his memory, is evidently of a later date.”

A model brig, sixty feet long, was launched on a lake in the park in 1848.

William Finch, Esq., of Netherfield, Sussex, High Sheriff of Sussex aud Surrey in the 8th. of Henry VI., stated to be descended from Herbert, married Agnes, daughter of Walter Boo, Esq., of Dartford, whose eldest son,

Henry Finch, Esq., of Netherfield, who married Alice, only daughter and heiress of Philip Belknap, Esq., of the Moat, near Canterbury. His eldest son,

Sir William Finch, Knight, distinguished in the French wars of Henry VIII., was married twice, first to Elizabeth, daughter of Sir James Crowmer, of Tunstal, and secondly to Catherine, daughter of Sir John Gaynsford, of Crowhurst. He was succeeded, at his decease, by the eldest son of the first wife,

Lawrence Finch, Esq., who married Mary, daughter and heiress of Christopher Kemp, Esq., but dying without children, was followed by his brother,

Thomas Finch, Esq., who for his services against Sir Thomas Wyatt was made one of the Knights of the Carpet, October 2nd., 1553. He married Mary, elder daughter and coheiress of Sir Thomas Moyle, of Eastwell, Kent. His eldest son,

Sir Moyle Finch, Knight, of Eastwell, was created a Baronet July 29th., 1611. He married Elizabeth, only daughter of Sir Thomas Heneage, of Copped Hall, Essex, who some years after his death was elevated to the Peerage, July 8th., 1623, as Viscountess Maidstone, and further raised, July 12th., 1628, as Countess of Winchilsea. His eldest son succeeded, on his decease in 1614, namely,

Sir Theophilus Finch, who having no issue, the Baronetcy went to his brother,

Sir Thomas Finch, who, on the death of his mother, March, 1633, inherited her Peerages as Viscount Maidstone and Earl of Winchilsea. His Lordship married Cecilie, daughter of John Wentworth, Esq., and died in November, 1634. His eldest son was

Heneage Finch, second Earl of Winchilsea, who for his staunch adherence to the Royal cause was created by Charles II. Baron Fitzherbert of Eastwell, Kent. He married four times, and had twenty-seven children, and was succeeded by a grandson,

Heneage Finch, third Earl of Winchilsea, whose only son having died an infant, his honours reverted, at his decease, August 14th., 1712, to his uncle,

Heneage Finch, fourth Earl of Winchilsea, who married Anne, daughter of Sir William Kingsmill, of Sidmonton, Hampshire, but died without issue, September 30th., 1726, when the titles devolved on his half brother,

John Finch, fifth Earl of Winchilsea, at whose decease, without issue, September 9th., 1729, the Barony of Fitzherbert expired, while the Earldom and Viscountcy went to his kinsman,

Daniel Finch, (second Earl of Nottingham and Baron Finch, a descendant of the first Baronet). His Lordship married twice, secondly the Honourable Anne Hatton, only daughter of Christopher Hatton, Viscount Hatton, by whom he had a large family, of whom the eldest son succeeded him, at his death, January 1st., 1729–30.

Daniel Finch, seventh Earl of Winchilsea and third Earl of Nottingham. He married twice, but died in 1769, sine prole, and was succeeded by his nephew,

George Finch, eighth Earl of Winchilsea and fourth Earl of Nottingham, who died unmarried, August 2nd., 1826, when the honours went to his cousin,