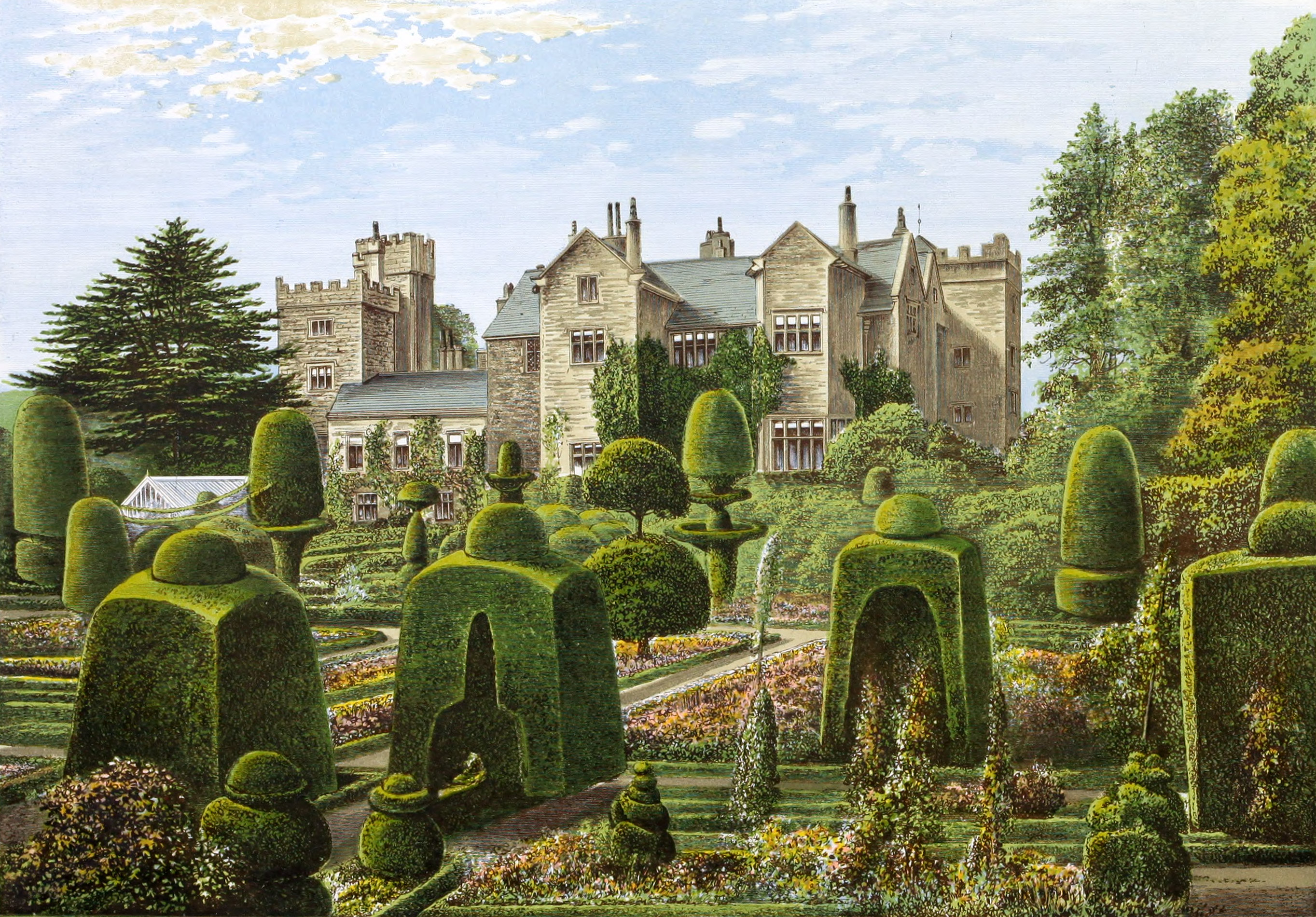 Levens Hall is a venerable pile of building, built in the reign of Elizabeth. The gardens were laid out in that of James the Second, in the quaint style then pre- vailing, with straight walks and clipped yew hedges. The grounds are very beautiful and romantic, hanging over the river Kent, which runs through the estate.

The banks of this stream are celebrated for the petrifying springs contained in them, by which plants and such like are encrusted.

The property lies in the parish of Heversham.

There are some old beech trees in the grounds of enormous size, as well as ancient thorn trees and venerable oaks studded about.

The park is well stocked with fallow deer.

There is au ancient round building, called Kirkstead, now in ruins, within it.

It used to be the custom, but whether it is continued at the present time I do not know, for the Mayor and Corporation of the town of Kendal to meet together once a year, namely, on the 12th. of May, to spend the afternoon with the friends of the House of Levens, after having proclaimed the Fair at Milnthorpe, to eat radishes, drink “morocco,”—a very strong old ale,—play at bowls, and engage in other amusements.

The original name of this estate was Lefuenes. It was owned by

Norman de Redeman, with whose descendants it rested till the reign of Henry the Seventh. From them it was purchased by one of the family of

Bellingham, who held it till it was sold, about the year 1686, by

Colonel James Graham, one of Sir Walter Scott’s “Grahams of Netherby Clan.” His only daughter married

The Honourable Frances Howard, heiress of the property, married

Richard Bagot, Esq., who assumed, in consequence, the surname of Howard. Of this marriage there was an only daughter,

The Honourable Fulke Greville Upton, younger brother of the first Lord Templetown, who thereupon exchanged his patronymic for that of Howard. He died March the 4th., 1846, and on the decease, in 1877, of Lis widow, the Honourable Mrs. Howard, just mentioned, the estate was inherited by her nephew, namely,

The Honourable Arthur Upton, brother of the second Lord Templetowu, a General in the Army, and Colonel of the 107th. Regiment of Foot, who was born January 15th., 1807, and married, July 17th., I860, the Honourable Elizabeth Frederiea Blake, elder daughter of Joseph Henry, third Lord Wallseourt.