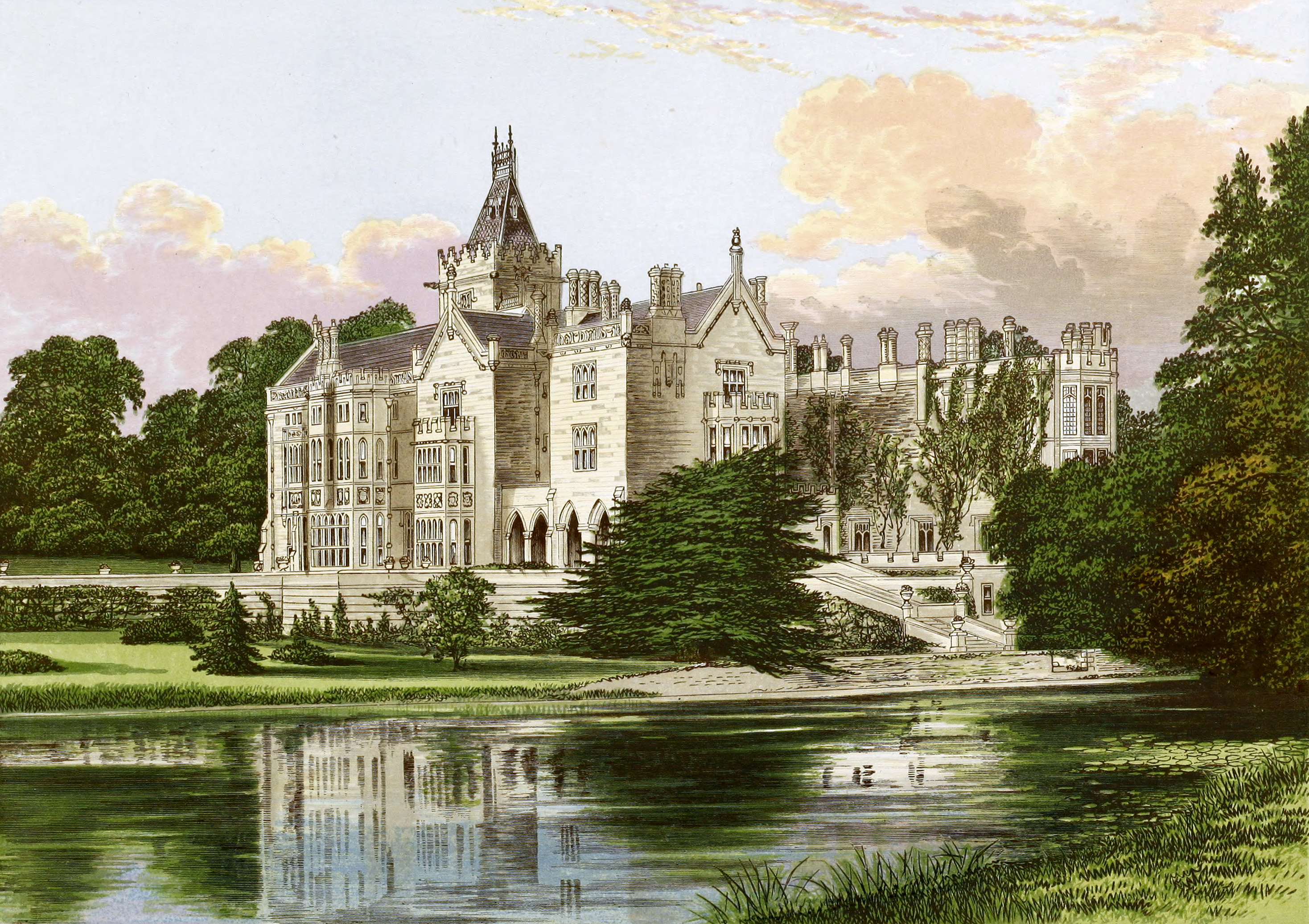 Adare Manor, which has been for ages the residence of the ancient family of O’Quin of Inchiquin, is situated near the picturesque village from whence it takes its name, and has long been celebrated for the various ruins in its close proximity.

The beauty of the demesne is greatly enhanced by the river Maigue, which flows through it from south to north, the ruins on its banks forming picturesque scenes, while extensive vistas through aged trees and shaded walks give a peculiar interest to the whole place. The estate of Adare was long remarkable for the number and magnificence of its elms, but in November, 1814, the whole avenue in front of the then existing mansion was blown down. The memorable storm of January 6th., 1839, uprooted nearly seven hundred trees; that in January, 1842, between six and seven hundred more, sadly mutilating the noble avenues, and destroying the finest specimens of single trees.

The ruins at Adare consist of a Castle, a Trinitarian Friary, an Augustinian Friary, a Franciscan or Grey Friary, which last is situated within the demesne, and two small churches in the parish churchyard.

In the year 1807 the church of the Augustinian Abbey was given to the Protestants as their parish church, the old one being out of repair, and too small; and in 1814 the refectory was roofed and converted into a school-house. The family mausoleum was erected in another part of the ruins. Over the entrance is the following text:— “My son, remember now thy Creator in the days of thy youth.” On the west front are the family arms, and underneath,—”This Mausoleum was constructed in the year of our Lord 1826, by William Henry, Earl of Dunraven, for the remains of his dear father, Richard, first Earl of Dunraven, and for the family of Quin of Adare.”

The present edifice was begun in 1832. Some of the walls of the old house still remain, but are so amalgamated with the new, that they could only be recognised by one who had watched the progress of the alterations. The building was still unfinished at Lord Dunraven’s death, and in 1850, Mr. P. C. Hardwick was consulted, and with much talent and judgment completed the south and west fronts, after his own designs, though following the general plan intended by the late Earl. The new liouse is built of large blocks of hammer-dressed limestone of diSerent colours, grey predominating, but relieved by occasional blocks of red and brown, all found in quarries in this county. The style of the building is Tudor, and the details are carefully taken from tlie best examples of the period in England and the Continent. The works, both stone and timber, were entirely executed by the mechanics and labourers of the village and neighbourhood, and proved an inestimable blessing during the years o£ famine, at which time provisions were given out to them at the ordinary prices.

The Great Hall is a noble apartment, fifty-three feet in length, thirty-seven feet wide, and thirty feet in height. It contains a very fine organ, of great compass, having forty-four stops and two thousand three hundred and fifty-three pipes. The hall is lighted by eight windows, of difierent sizes, placed high up in the wall, some of them containing coloured glass. The walls are decorated with armour, and with horns of the old Irish deer, several of which are of remarkable size, the pair over the fireplace measuring eleven feet four inches across from tip to tip, and another pair ten feet four inches.

The Picture Gallery is a magnificent room, in length one hundred and thirty-two feet six inches, width twenty-one feet, and height twenty-six feet six inches. It has five very large bay windows, partly filled with stained glass, illustrating the pedigree of the ancient and noble family of Wyndham. The walls are hung with a large collection of family portraits, to which is added a choice selection of paintings both by ancient and modern masters. Busts, on pedestals, occupy positions round the room. The furniture is covered with tapestry worked by the village and school-girls, who, during a time of great distress, were trained to execute a variety of useful and ornamental fabrics.

Other apartments are correspondingly of large size, and fitted up with great taste and elegance.

At the head of the principal staircase, on the second floor, is a wide corridor, occupied as a museum, and containing a collection of objects of interest, comprising antiquities, geological specimens, and miscellaneous curiosities of various kinds. In the centre is placed a magnificent and perfect skeleton of the great extinct Irish deer, recently dug up in the vicinity of Limerick.

On the south side of the house is a large geometrical garden, enclosing a bowling green and croquet ground, bounded on the east by handsome stone terrace walls, surmounted with vases, and with a broad flight of steps leading down to the river, from whence a gravel walk, under a row of majestic elms, extends along the banks of the stream to a picturesque bridge in the vicinity of the Abbey.

This is one of the few families of Celtic origin in the Peerage of Ireland.

Its immediate ancestor was

James Quin, of Kilmallock, brother of the Right Rev. John Coyn, or Quin, D.D., Bishop of Limerick in the reign of Henry the Eighth, but who resigned the see on account of his blindness and infirmity.